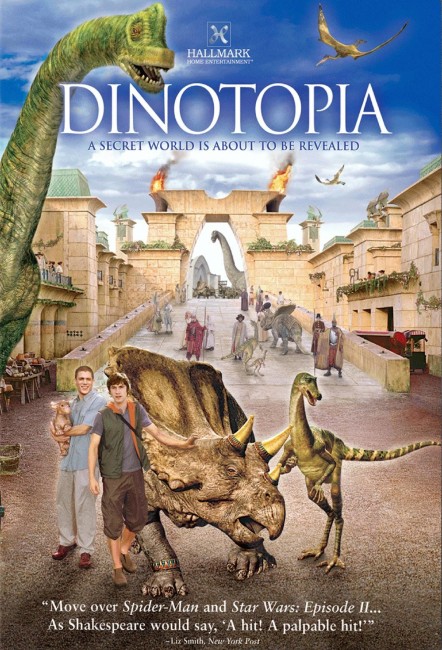 Frank Scott and his two sons Karl and David are caught in a storm in their small single-engine plane and crash into the ocean. The two boys manage to get out but are forced to leave their father behind as the plane sinks. They wash up on the shores of a strange land. They soon discover that they are in Dinotopia, a world where dinosaurs have evolved intelligence and the ability to speak and live in harmony with humans. The boys make their way to Dinotopia’s capital Waterfall City where they are instructed to study the moral codes that all Dinotopians abide by. David sets to learning, but Karl gets in frequent trouble with his refusal to abide by the rules and constant desire to find a way off the island, which is forbidden in Dinotopian law. David is sent to train to become a Skybax rider, while Karl is sent to a dinosaur hatchery and given an orphan baby dinosaur to parent. At the same time, the Sunstones that power Dinotopia are starting to fail. As the predators close in on Waterfall City, Dinotopia’s only salvation may be in the two brothers joining the untrustworthy archaeologist Cyrus Crabb and venturing into The World Beneath, an underground realm forbidden in Dinotopian law, in search of more Sunstones.

Dinotopia is a tv mini-series based on the popular series of illustrated books by James Gurney. Gurney began publishing with Dinotopia: A Land Apart from Time (1992), which took the form of a journal supposedly written by explorer Arthur Dennison who was trapped in Dinotopia with his two sons. The book was largely a vehicle for Gurney’s illustrations that depicted in depth the creatures and culture of the world of Dinotopia, which existed as an appealing mix of Victorian retro-culture and sentient dinosaurs. Gurney produced three sequels – Dinotopia: The World Beneath (1995), Dinotopia: First Flight (1999) and Dinotopia: Journey to Chandara (2007) – and allowed the world to be sharecropped by other writers in a series of (to date) eighteen other books, as well as two computer games.

This tv mini-series adaptation of Dinotopia is made by Hallmark Entertainment who have a long history of family friendly and often lavishly produced fantasy mini-series and tv movies. (See below for Hallmark’s other genre titles). It should be noted that when it comes to the mini-series James Gurney’s books have been ‘modernised’ – the Victorian father and son exploring the world after having been shipwrecked has been updated to two contemporary American boys exploring the world after their plane goes down (the father who narrates the journals is also cast off to the side, appearing only at the beginning and end of the mini-series). The series does a fair job of dramatically replicating many of the plates from Gurney’s books, although the dumping of the Victorian setting has also meant the elimination of all the wonderful Steampunk-styled devices that Gurney came up with. The show now seems conceived as a blend of Lost Horizon (1937) – a fantasy where a group of travellers encounter a Utopian paradise in the Himalayan mountains – and of prehistoric lost world adventures such as The Land Unknown (1957) and The Land That Time Forgot (1974).

The dinosaur effects are expectedly very good. Director Marco Brambilla gives them a great entrance – rampaging through a town, a brontosaurus attacking a hut and then the image of passengers climbing aboard a dinosaur that majestically stretches above the town to go on a tour. Especially good is the character of Zippo (who one would swear is voiced by the late Roddy McDowall), which has been created digitally and is an entirely virtual creation that integrates with the live actors.

That said, one is never less than aware throughout that the mini-series is perpetually nudging and trying to make you feel wonderment. There is an awe-filled score constantly in the foreground, while Marco Brambilla keeps cutting to big money wonder shots of dinosaurs and cities, even if some of these don’t entirely make sense. Waterfall City, for example, exists as a marvellous place where waterfalls mingle with the buildings and tumble everywhere – but one that seems almost impossible in actuality. It is akin to trying to make architectural sense out of an M.C. Escher drawing in terms of trying to trace back and see where all the rivers that surely must be feeding the plethora of waterfalls are coming from.

The characters are simplistic and Marco Brambilla directs the series in easy emotive cues – there is nothing to Dinotopia beyond that which is all there on the surface. The people that inhabit Dinotopia are noble to the point of being bland – in the early parts (at least until Cyrus Crabb emerges as a villain in the later episodes), one wishes there a bit of sedition in Dinotopia to make it more interesting.

You are also never entirely sure whether the series holds its Utopian society in awe or not. Much of the show is centred around showing us the virtues and nobility of the Dinotopian world and in championing David’s learning and respect of its ways over Karl’s anti-authoritarianism and disinterest in learning. Clearly, the writer champions the noble sentiments, respect for the environment and communalism that the Dinotopians uphold, but at the same time the story also follows a good old Buck Rogers-type arc – that of the outsider character(s) whose present-day individuality and instinctiveness proves superior to the staid and tradition-bound Utopian society. The series never seems sure which of these attitudes to champion.

The drama built up at the climax of the third episode is generic – the necessity for the heroes to go on a quest for the Sunstones (which have irritably ill-defined purpose in the series and are no more than the fantasy equivalent of Hitchcockian McGuffins) without which the entire world is falling apart, while at the same time the world’s predators for no apparent reason start closing in on the capital city and everything is dependent on the pluck of the two outsiders rather than any of the natives to the land. Certainly, the mini-series gains its feet dramatically during the second episode where the Skybax training sequences move away from simplistic wonderment to focus on something moderately dramatic.

The effect of Dinotopia lies almost entirely in the depth of its background. It is here that the show finally impresses and does one of the things that is the mark of good science-fiction – it gives living, breathing depth to the fictional world it creates, taking us through the society, culture and even philosophy that the people believe. There are not many other science-fiction works that take the time to do this. There are undeniable implausibilities present – it is hard, for instance, to work out how the economics of Dinotopia work – things are free, the populace seem to lack any kind of monetary system and to instead believe in communalism, but then there are aspects of the world that do seem to require money – Cyrus Crabb runs an antique shop and the messenger bird demands to be paid.

The show was subsequently spun out as a tv series Dinotopia: The Series (2002), which consisted of thirteen episodes but ended up being cancelled after only six episodes had ever aired. Hallmark also produced an animated video-released sequel Dinotopia: Quest for the Ruby Sunstone (2005).