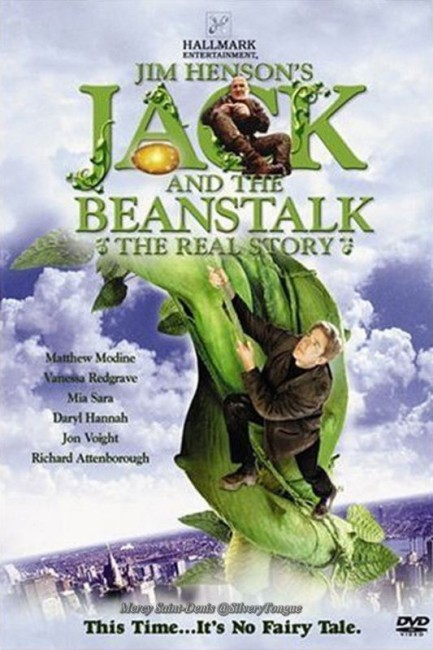 Jack Robinson is the heir to the Robinson International business empire. As he approaches his fortieth birthday, Jack is concerned about the curse that has seemingly killed all men of the Robinson line at that age. Mysterious things suddenly begin to happen – the skeleton of a giant is uncovered at the site of a casino they are developing on the grounds of a castle in England. Jack then meets a mystery woman Ondine who gives dire warnings that the giants are coming and how Jack must pay for the things that his family have stolen. Jack meets Countess Wilhelmina, a relative that he believed was dead but who appears to have lived a very long time. She tells him that the fairytale ‘Jack and the Beanstalk’ was true and how in 1611 Jack’s ancestor, also named Jack, swapped the family cow for a handful of seeds that grew to a mighty beanstalk reaching up into a land in the clouds. There Jack snatched a talking, golden-egg laying goose and an animate harp from a cruel giant and returned home, cutting the beanstalk to prevent the giant following. Wilhelmina gives Jack an amulet. In the amulet, he finds a seed and now lets it grow into a giant beanstalk. He climbs the beanstalk up into the realm of the clouds, only for Ondine’s people to arrest him. He is put on trial before a court of the giants where he learns the real story of ‘Jack and the Beanstalk’ – how his ancestor stole the goose and harp from a good-natured giant and in doing so took away the items that kept the land in balance, killing all greenery and dooming the people to starvation. The court now sentences Jack to death to pay for the crimes of his ancestor.

Jack and the Beanstalk: The Real Story is another tv mini-series from Hallmark Entertainment, a production subsidiary of the Hallmark cable channel in the US, which in turn was a creation of the Hallmark greeting cards company. Hallmark specialised in a good deal of family entertainment – their output includes a great many historical series and Christmas season films. Since the 1990s, they have produced an increasingly more lavish and worthwhile series of tv movie and mini-series adaptations of various fairy-tales and classic stories. Those of genre interest are listed at the bottom of the page.

Jack and the Beanstalk: The Real Story comes prefigured with the announcements that the mini-series is Jim Henson’s Jack and the Beanstalk: The Real Story. This may come as some surprise to fans of Jim Henson’s work, especially considering the fact that Henson died in 1990 – more than a decade before Jack and the Beanstalk: The Real Story was made. This however is yet another example of Henson’s son Brian milking his father’s name for all that he can, which he has done with increasingly mediocre results since Jim died. Brian and the Henson empire have worked with Hallmark before. Most notably, they co-produced the mini-series Gulliver’s Travels (1995), which is the best work put out by the Henson production company since Jim’s death, and the tv series Farscape (1999-2003). The Jim Henson Creature Workshop has also produced effects for numerous other Hallmark productions.

While I greatly like Jim Henson’s work, I must admit to being no fan of Brian Henson’s films and tv series. Brian has proven no more than a pillager of the good name of his father, turning out a series of formulaic Muppet spinoffs wherein the familiar characters went through their paces but were distinctly lacking in any of the original magic. Beyond that, Brian Henson has lent the family name to a series of puerile tv flops – Dog City (1992), Bear in the Big Blue House (1997-8), Brats of the Lost Nebula (1998), Simian Undercover Detective Squad (2008) and especially the abysmal Aliens in the Family (1996) – with the only exceptions being the aforementioned Hallmark collaborations and the witty Dinosaurs (1991-3). Brian has proven no better when it comes to directly stepping behind the camera as director, having made two poor Muppet movies – The Muppet Christmas Carol (1992) and Muppet Treasure Island (1996). The exceptions in Brian Henson’s oeuvre are the excellent Battleground segment of the tv mini-series Nightmares & Dreamscapes: From the Stories of Stephen King (2006) that has William Hurt fighting an army of toy soldiers and the astonishingly filthy-minded The Happytime Murders (2018), which readily showed puppets engaged in less-than-PG-rated activities.

The mini-series has a script from James V. Hart, who also wrote Muppet Treasure Island, along with Contact (1997) and some interestingly revisionist fantasy works such as Hook (1991) and Bram Stoker’s Dracula (1992). Hart and Brian Henson co-write with Bill Baretta, previously a Muppet performer and voice actor best known for voicing the dumb schmuck husband in tv’s Dinosaurs, and who also plays the bad-tempered/good-natured giant that Jack kills here.

Hallmark have done some clever and inventive reworkings of classic stories – most notably Caroline Thompson’s revision of Snow White (2001). In a similar vein, Jack and the Beanstalk: The Real Story starts out promisingly. It disorientatingly opens in the present day with workmen unearthing the skeleton of a giant, before we meet Matthew Modine’s Jack who, rather than a simple-minded and impoverished peasant boy, is the CEO of a business conglomerate, which is followed by a scene where he tosses a scientist (Anton Lesser) out for failing to come up with a batch of super-seeds. In these scenes, we get the promising impression of a series that is playing around with the expectations of the fairytale – we encounter giants, Jack and seeds, but in a very different way than we expect to. Towards the end of the first half, we eventually get a straight retelling of the classic fairytale. The second part of the show then proceeds to turn that on its head and offer, in a not un-Rashomon (1950)-like way, a completely different interpretation – one where the giant is not a mean-tempered killer but is kindly and genteel-hearted and where Jack is not a simple-hearted peasant boy but a thief. The series also plays with other interesting suggestions – that the giants that live in the clouds are counterparts of the various gods of cultural myth – we meet giants that look like Zeus, Hephaestus, Odin and so on. Sometimes the deconstruction is a little stretched – like where it tries to improbably suggest that the goose, the golden eggs and the harp are all needed to somehow keep the land in the clouds in harmony with nature.

In the end, for all its creative reinterpretation, Jack and the Beanstalk: The Real Story never goes far enough. It is reasonable on its own terms and a passable fantasy. Brian Henson creates an occasionally imaginative fantasy realm in the clouds – populated with some odd creatures and some lovely touches like having Richard Attenborough’s giant reading Don Quixote through a magnifying glass, turning the pages with tweezers. However, if you compare the fantasy realm here with the otherworlds that Jim Henson created in The Dark Crystal (1982) and Labyrinth (1986) and the superb flights of imagination that either of these contained, Jack and the Beanstalk: The Real Story seems lacklustre.

The screenplay’s deconstruction of the fairytale is clever and is what holds the series together, although in the end one maybe expected more of it. When the reversal arrives, the images of the giant caringly tending his serfs seem dreadfully twee. One kept expecting the mini-series to pull back and reveal a third interpretation that showed the tweeness of this version as being another myth that had been created by the people of the clouds and that the truth lies somewhere between the two. For a work that promises to tell ‘the real story’, the real story offers little more than a saccharine reversal of the sympathies of the original. The story also seems padded, particularly during the running around the casino. Henson also allows Jon Voight his unrestrained head with a silly accent – these days Voight, once an acclaimed actor, is proving to be a bad ham who seems to have no concept of how silly a performance should get.