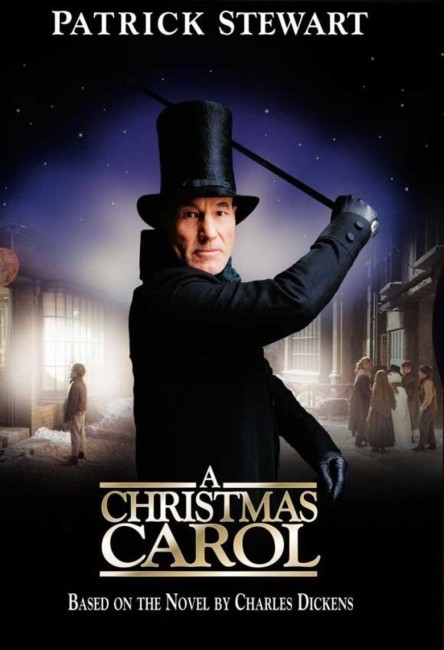 Ebenezer Scrooge is mean-spirited and concerned only with making money. It is Christmas Eve and Scrooge sneers down on all Christmas spirit. That night Scrooge receives a visitation from the ghost of his former partner Jacob Marley, followed by the ghosts of Christmas Past, Present and Yet to Come. Each of these show Scrooge the tenderness that he has forgotten in the past, the misery that his mean-spiritedness causes in the present and the grim and lonely future that awaits him if he does not repent of his ways.

In this case, Hallmark have brought on board British director David Jones, who has made various BBC tv plays and serious dramatic films like Betrayal (1982), 84 Charing Cross Road (1986) and an adaptation of Franz Kafka’s The Trial (1993). In the central role, Hallmark have obtained no less than Patrick Stewart. Patrick Stewart brings a particular history to the part in that he essayed the role of Scrooge in a one-man Broadway play that he also wrote and directed, which premiered in 1991 and has been revived several times in the decade since.

David Jones has an exceptional grasp of the Victorian period milieu. The streets and Scrooge’s office have a downbeat realism and look authentically like we are there; while the Cratchit dinner scene evokes a sense of painfully threadbare poverty. The film is considerably aided by an excellent script. Writer Peter Barnes has an exceptional ear for period dialogue. Moreover, he uses the opportunity to explore Scrooge’s character, especially during the Fezziwig flashbacks.

Most striking of all is during the appearance of Marley’s ghost, where Barnes adds meaning to the standard clanking chains and David Jones pulls away to offer extraordinary images of skies filled with ghosts and lost souls trying painfully to connect with the homeless and make up for their mean-spiritedness in corporeal life.

In fact, what we have is a version of A Christmas Carol written and directed to a far more adult level than almost any other adaptation of the story. Most of the other below-mentioned versions are all sold as children’s, or at least family, films but it is hard to imagine this version easily being digested as children’s fodder.