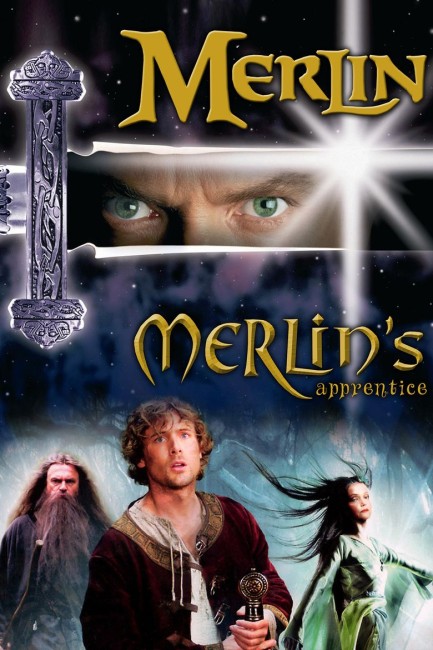 Having successfully created Camelot under King Arthur, Merlin the magician lies down in a cave to take a rest from his efforts. Intending to only rest for one season, Merlin is startled to wake and find that he has slept for fifty years. He finds that during this time Arthur has died and that Camelot is now ruled by Lord Weston. However, Camelot has lost what it had under Arthur due to the departure of the Holy Grail. Merlin comes to Camelot’s aid as it is besieged by the forces of the brutish warlord Rauskaug, who is magically aided by the Lady of the Lake. The vagabond thief Jack tries to break in and steal Merlin’s wand and Merlin is surprised to find that Jack has magical abilities. Jack persuades Merlin to take him on as an apprentice. As Rauskaug’s armies close in on Camelot, Weston pressures Merlin to remove the magic seals that protect the castle so they can flee via the secret tunnels. Not wanting to take the path of retreat, Merlin and Jack try to find The Holy Grail and re-establish Camelot’s power. Their search is thwarted by the Lady of the Lake’s treacherous sorceries. As Jack comes to take Merlin’s place, he must lead the people of Camelot away from the castle’s destruction and into the wilderness. They are beset by hostiles on all sides. The secret to the return of the Holy Grail, Jack comes to realise, is in uncovering the knotted web of secrets and sins that this generation of Camelot harbours.

Merlin’s Apprentice is not based on any existing tales from the Arthurian cycle but is an entirely original story. It is also a sequel that has to ignore some of the facts that were established by Hallmark’s Merlin – like how the original mini-series had Arthur killed before ever finding the Holy Grail. Most of the rest of the mini-series feels like standard Arthurian cliches. The dialogue is ponderous – Sam Neill delivers ominous lines like “I have delivered Camelot to her enemies.” Many of the pieces of plot seem clunky – it is obvious to everyone watching bar the character of Jack from the outset that Meghan Ory is a girl disguised as a boy. The actors have been cast for their good looks and come dressed in what feels like standard period costumes from the wardrobe department. As such, the mini-series’ world is one without any convincing texture or depth.

Certainly, Merlin’s Apprentice is not as bad an epic fantasy as Hallmark’s disastrous Earthsea (2004) was, but it feels generic in its elements – the politicking around Camelot, the old hat story of the girl disguised as a boy, the hidden secrets of the court, the barbarian warlord at the gates. More importantly, the mini-series entirely glosses over the character arc that should have been the dramatic centre of the show – Jack’s evolution from vagabond thief to full wizard – of which we learn almost nothing. Most of the plot is a rehash of other elements from the Arthurian legends – Jack coming into his destiny as a great wizard essentially replays the story of the boy Arthur becoming the king; while the Lady of the Lake and her bastard son is a replay of the Arthurian cycle’s Morgan-le-Fay and her/Arthur’s bastard son Mordred. The end of the story does develop out into an interestingly complicated weave of complicities that involve all present but by that point the rest of the mini-series has sunk so much into the routine that it counts for little. As with Merlin, Sam Neill feels miscast in the role. The role doesn’t feel like Merlin the Magician, it only feels like Sam Neill in a long beard and robes.