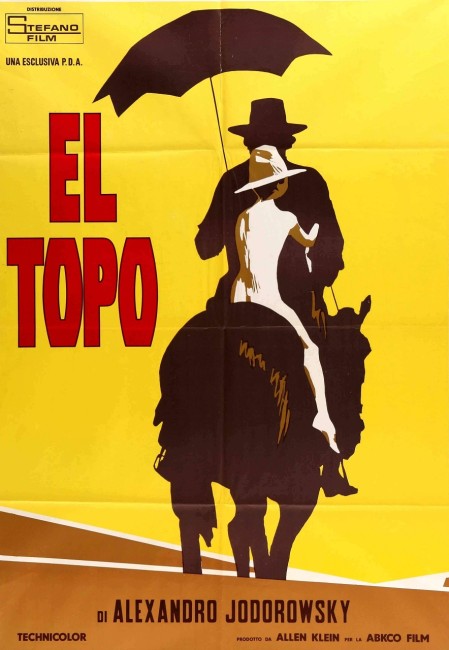 El Topo, a gunslinger dressed all in black leather, rides through the desert accompanied by his naked seven year-old son Brontis. El Topo slaughters a group of bandits led by The Colonel who are terrorising the countryside and takes Mara, The Colonel’s woman, as his own. Mara tells him about the Four Masters who have each attained a level of mystical perfection in gunslinging. El Topo then sets out to defeat each of The Four Masters using a combination of trickery and mysticism.

El Topo is considered one of the cult movies, right up there along with The Rocky Horror Picture Show (1975) and Eraserhead (1977). El Topo built its initial cult among the New York head set in the 1970s and has remained a late night must see favourite ever since. Its reputation is something that has been magnified by the film’s obscurity – it has never, for instance, appeared on video in many countries, except on bootleg, eventually only turning up on dvd in 2006.

The force behind El Topo is Alejandro Jodorowsky, a Chilean national of Russian-Jewish background who has lived principally in France and Mexico. Alejandro Jodorowsky is a intriguingly bizarre character. He claims to have had a childhood filled with mystic experiences, active hallucinations and bizarre sex from the age of four. Jodorowsky has worked as a cartoonist, a mime, a circus clown, a comic-book creator and created a form of tarot psychotherapy. He had a reputation as an avant-garde theatre director in the 1960s – one performance that involved live animal sacrifices and climaxed with Jodorowsky being stripped and whipped by a naked woman who was covered in honey and had live snakes taped to her breasts, was banned in Paris. His first film Fando and Lis (1968) apparently resulted in a riot after it was screened as a festival in Acapulco and was widely unavailable until the 2010s.

Jodorowsky makes disturbing boasts such as how when it came to the scene in the film where El Topo rapes the character of Mara that he dismissed the rest of the film crew, left the cameras running and raped the actress himself. (The actress playing her was apparently a drug addict who turned up on his doorstep one day).

One might describe El Topo as a surrealistic Zen Western – imagine Luis Buñuel meets Sergio Leone, or maybe the tv series Kung Fu (1972-5) directed by Sam Peckinpah. Jodorowsky himself plays the titular El Topo (Spanish for The Mole), a gunslinger dressed in black leather who rides through the countryside accompanied by his naked son (played by Jodorowsky’s own son). The plot consists of El Topo’s attempt to defeat four gunslingers who are spiritual masters and defend themselves against him with the likes of butterfly nets or by allowing bullets to pass through their bodies. All of this comes accompanied by much sex, fetishism and violence – the streets do literally run with blood. The film also features a number of genuine freaks and deformities.

Although he has been claimed as a genius, Alejandro Jodorowsky’s film remains surprisingly lacking in intellectual content. Everything in El Topo, from the imagery to the sex and violence, has a brutal in-your-face directness and a lunatically deadpan intensity that verges on the comic. In interviews, Jodorowsky comes across as talking complete bullshit – his explanation of the symbolism behind El Topo is balmy to say the least.

At one point, El Topo and Mara travel through the desert, they are thirsty so he prays and strikes a rock, which erupts with water – Jodorowsky says he chose the rock and intuitively knew it would give water because of the rock’s resemblance to his own penis. (Make what you will of such symbolism). Throughout the filming while playing El Topo, Jodorowsky wore mystical undershorts that exposed his anus and the tip of his penis in order to heighten his creative vision. His claims about the philosophical underpinnings of the film appear as a random jumble of Buddhism, Christianity, Carlos Castaneda, Nietzsche and conspiracy theories.

Not unexpectedly, El Topo appears as a haphazard clutter of surrealistic imagery, constructed with no rhyme or reason other than Jodorowsky’s philosophical pretensions and love of bizarre shock imagery. Which does make for a film that is at least interesting. Jodorowsky is a believer in the theatre of transcendent mysticism – “If you’re enlightened, El Topo is a great picture. If you don’t understand it, you’re a limited asshole.” If anything, the bizarre jumble resembles not so much a mystical experience as it does a Zen parable, something that is not intended to make sense but to disorient with its nonsense collusions and non-sequitirs.

Subsequent to El Topo, Alejandro Jodorowsky has remained an erratic talent, having made only four films in the forty years since. Although, just about every year he turns up at some film festival trying to get a new project, including the oft-mentioned Son of El Topo, off the ground. (The most fascinating of Jodorowsky’s never-made productions was a planned production of Frank Herbert’s Dune (1965) that was announced between 1974-6 with a sensational cast. Jodorowsky’s Dune (2013) is a fascinating documentary made about the failed production).

Jodorowsky’s follow-up to El Topo, The Holy Mountain (1973), is a similar violent, surrealistic but more polished tale about a quest for enlightenment, which the cast reputedly performed while hypnotised. Tusk (1980), about the strange relationship between a woman and an elephant that were born on the same day, was a financial disaster that has remained unseen outside of France. The Rainbow Thief (1990), a meandering tale about a prince who goes to live in the sewers, was disowned by Jodorowsky due to interference from producers.

Jodorowsky’s biggest success, his greatest acknowledgment to commercialism and conventional narrative, and probably his best film, is Santa Sangre (1989), a characteristically violent, sexually contorted and over the top, yet often beautiful tale, of a circus performer who acts as his mother’s arms (which have been severed by her lover) in a knife-throwing act and is driven to kill women by her domineering personality. After a twenty-four year silence, Jodorowsky returned to screens with the surreal autobiographical works The Dance of Reality (2013) and Endless Poetry (2016), as well as the documentary Psychomagic: A Healing Art (2019).