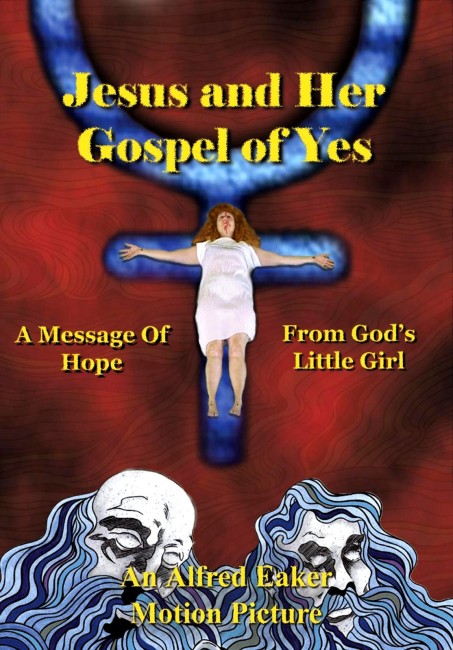 The young girl Jesus is divinely born. Jesus grows up and begins to preach her message, all the while beset by the deviltry of Satan. However, as Jesus is tried by the security forces and sentenced to the cross, others seek to exploit and commercialise her message.

I first encountered Alfred Eaker via his second film W The Movie (2008), a surrealistic satire on the George W. Bush presidency. Eaker is an artist resident in Ohio who works primarily in paint media. Eaker’s films grew out of his work as a performance artist where he appears under the name Blue Mahler (so named for Eaker’s love of the composer) along with his wife who appears under the stage name Pink Freud.

Jesus and Her Gospel of Yes was Alfred Eaker’s first film. Visually, Gospel of Yes is a completely bewildering experience. The nearest film that one might think to compare it to is Prospero’s Books (1991) where the straight narrative of Shakespeare’s original play was overrun by Peter Greenaway’s floridly overripe and absurdist production design and visuals that were constantly interrupting the frame supposedly illustrating the books. Here the story is constantly being overrun by an amazing array of back-projected collages, Terry Gilliam-esque cutout animations and surreally styled frames. The backgrounds and sets have all been designed in a series of modernist styles or are works from various artists that have been optically pasted in (the end credits contains a lengthy list of the various local artists involved and the galleries and websites where one can find their works).

There is almost no narrative thread to the film, other than a vague adherence to the life of Jesus Christ. The film is, if you like, an absurdist nonsense biography of Christ, all as though enacted on the giddy surrounds of a children’s creche as worked over by some modernist artist. The dialogue is often construed in terms of nonsense poetry or in terms of stream of conscious associations – “King of Kings” turns into “King of Kong” whereupon we get a man in a monkey mask running around, for instance. This is something that is way beyond surrealism to approach the cinematic equivalent of a work of experimental theatre. It is quite some time since I have seen a film that so dispatches any footholds to traditional narrative or commercial filmmaking.

Various aspects of the Gospel story are given wacky modern interpolations – Judas becomes a crack addict; John the Baptist lives in a trailer park and eats gummy worms; the Last Supper takes place in a coffee shop and consists of the disciples passing a coffee pot and breaking a bagel; rather than loaves and fishes, Jesus feeds corndogs to the people; God sits watching humanity on a tv set; The Disciples are dressed as Mormons and so on. Being a modern film, Jesus is contrarily incarnated as a woman (co-director and Ohio artist/poet Cheryl Townsend), while we also have a cross-dressing Moses (who snidely announces that he goes by the pseudonym of Charlton Heston).

At times, the film comes with such a dense load of symbols, connections and obscure references that one’s head aches from trying to follow them. Eaker, for instance, takes from the Gnostic Gospels and himself plays the character of Panthera, who it was claimed was Mary’s secret lover and the true illegitimate father of Christ according to one Greek writer. There are mind-boggling references alikening aspects of the Gospel story to Star Trek (1966-9) and Superman, even quotes from The Outer Limits (1963-5).

As Eaker says in his online introduction to the film, this is a work that is intended to be seen multiple times so that its greater meanings can be pondered and grasped. This is an approach to filmmaking that clearly comes from a paint artist – someone who creates works allegorically, where the painted medium means that one is able to stack multiple meanings, symbols and associations into a single static image. Jesus and Her Gospel of Yes is such a bewildering film because it exists in terms of these symbols and absurdist juxtapositions rather than what one expects of a multiplex film, which concerns itself with the business of simply entertaining the masses, explaining every point and signposting symbols, rather than leaving them for the audience to think about.

The point that should also be made is that Jesus and Her Gospel of Yes is not intended as a satire of Christianity per se. Alfred Eaker identifies himself a progressive Catholic and a number of his painted works circle around religious and Biblical themes. Clearly, the film is an attempt to re-present the Christian word in a modern humanist light. If I understand the film correctly, for Eaker, Christ represents vibrant life, freedom and humanist acceptance of all persuasions and a refutation of Old Testament-proscribed legalism. In the latter half of the film, Moses, the bringer of Old Testament law, is painted as a villainous character and seen to be in alliance with a multiple-headed Jerry Falwell character and someone wearing a George W. Bush mask who are seen to have hijacked and perverted the original Christian message. It should also be said that among the wealth of symbolism that sometimes overburdens the film this message that is not always a clear one.