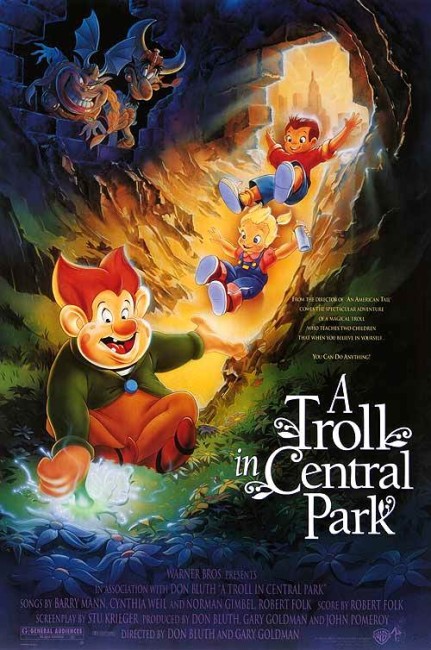 Stanley is a troll who has a green thumb that can make plant life sprout anywhere and likes nothing more in life than to tend his plants. However, Stanley’s plants annoy the troll queen Gnorga and so she banishes him to the surface world. Stanley emerges in Central Park. At only about six inches tall, Stanley finds the human world bewildering. He finds a small cave under a bridge in the park and settles down to raise a green patch there. Gus and Rosie are two children who feel ignored by their parents and sneak out to the park where they discover and befriend Stanley. Watching from afar, Gnorga plots to cause further misery for Stanley. She casts a curse that causes Gus’s tears to become a flood and then abducts Rosie and turns Gus into a troll.

Once, many years ago now, expatriate Disney animator Don Bluth made The Secret of N.I.M.H. (1982), which is still one of the finest films that Disney never made. Bluth has failed to make anything the equivalent of The Secret of N.I.M.H. again. He since went onto make more commercial films such as An American Tail (1986), The Land Before Time (1988), All Dogs Go to Heaven (1989), Rock-a-Doodle (1991), Thumbelina (1994), The Pebble and the Penguin (1995) and Bartok the Magnificent (1999). The majority of these have an utter insipidity to them. Indeed, with each successive film throughout the 1990s, Don Bluth almost seems determined to move as far away as possible from that dazzling artistic quality he displayed on N.I.M.H. Briefly in the late 1990s, the bigger-budgeted Anastasia (1997), and Titan A.E. (2000) allowed Bluth to regain some of the quality of his earlier work again. Alas, Titan A.E. proved to be a massive financial flop that caused Bluth to quit filmmaking altogether.

A Troll in Central Park is one of Don Bluth’s weakest films. It has an incredible banality. It is like an animated film that goes through the moves where nobody has put any feeling or care into it. In a Disney film, for instance, some of the events that occur – the transformation of Gus into a troll, the transformation of Stanley to stone at the end, even the climactic duel between Stanley and Gnorga – would be built up to the epically monumental or filled with incredible emotion but here they are scenes that are almost entirely without any affect or emotion.

Certainly, the animation is nicely drawn. However, the first third of A Troll in Central Park is almost all song and dance and little else bar the usual careening slapstick chases that occupy these films. The sentiments engendered are unbelievably insipid – trips through dayglo dreamland and ditty little epithets about living your dream. You can see how absurdly stacked in terms of feelgood emotions the film is – all the trolls in the film are drawn as classical ugly creatures but because Stanley is the hero, he is drawn cuddly and looks for all the world like one of the Seven Dwarfs.