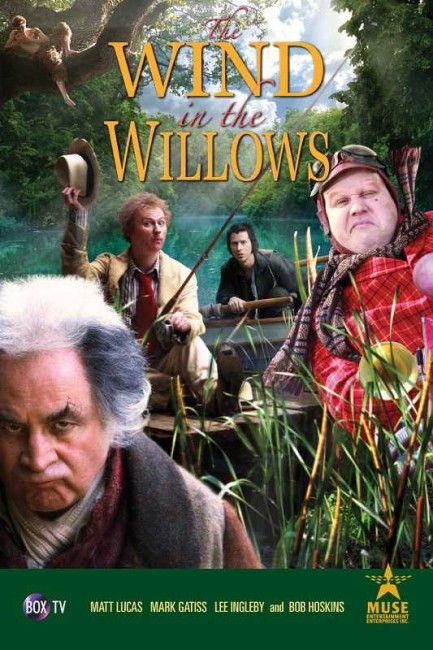 Mole emerges from his burrow and befriends Rat who lives on a nearby riverbank. Rat takes Mole to meet Toad who lives in a mansion he has inherited. Rat first warns Mole about Toad’s obsessions, which have a habit of becoming all-consuming. As they visit, Toad decides on impulse that they will all head off to enjoy life on the road in a horse-drawn caravan. The caravan is run off the road by a motorcar and Toad then develops an obsession with owning a motorcar. He buys several motorcars but his madcap ways end up writing them all off and he is forced to start selling furniture to buy more. In desperation, Mole and Rat venture into the Wild Woods to obtain the help of Badger, the only one known to be able to handle Toad’s obsessions. However, Badger is in the middle of hibernation and cannot be roused before spring. The three of them succeed in imprisoning Toad in his room for his own good only for Toad to climb out the window on a knotted bed sheet. He then steals a car but crashes it, whereupon he is arrested and sentenced to twenty years in gaol. With the aid of the gaoler’s daughter, Toad makes an escape disguised as a washerwoman. He, Mole and Rat set out to get Toad Hall back from the creatures from the Wild Woods that have moved in in Toad’s absence.

This version was made for the BBC by American director Rachel Talalay. Talalay obtained her start as a production manager at New Line Cinema and produced several of the A Nightmare on Elm Street films, before making her directorial debut with the series’ sixth entry Freddy’s Dead: The Final Nightmare (1991) and going onto other films like Ghost in the Machine (1993) and Tank Girl (1995). These did not set the world afire – in fact, all have terrible reputations even if this author has a liking for Tank Girl – and Talalay has been working as a director in television since then, alternating between assignments in the US and Britain. She later returned to film directing with A Babysitter’s Guide to Monster Hunting (2020).

If one has seen one or more versions of The Wind in the Willows in any of its forms, the story is familiar. Nevertheless, Rachel Talalay makes a nicely whimsical production out of it. The woodland and field around the animals shimmers with a CGI-emphasised hyper-real quality. Talalay is surprisingly faithful to the original story, much more so than many of the other adaptations listed here, with she including sections like Mole and Rat’s drift downstream and encounter with the god Pan and the various episodes that occur during Toad’s escape from gaol that many others throw out. That said, the driving of the weasels out of Toad Hall at the end seems to be hurried.

Filmed versions of The Wind in the Willows have the choice to go either of two ways when it comes to portraying the characters – in having the actors wearing masks as Terry Jones did, or most commonly by animating them. Talalay disappointingly takes the approach that most stage productions do in having the characters as essentially humans with a minimal amount of makeup to suggest their animal nature. This is disappointing in the sense that one would have thought a modern version could have done sophisticated things with animatronics or CGI.

In the end, for me, it was the casting that ended up working against The Wind in the Willows 2006. Rachel Talalay has cast several of the roles from out of recent British tv comedy – Matt Lucas, one of the leading lights from tv’s cult Little Britain (2003-8), and Mark Gatiss, one of the central members of The League of Gentlemen and a writer most notably as co-creator of the hit tv series Sherlock (2010– ), as well as Canadian comic Mary Walsh. Mark Gatiss gives a fine performance as Rat but when it comes to Toad, which is the central role of the story, Matt Lucas plays the part in a quavering falsetto that soon becomes extremely annoying. It is an amiable adaptation but Matt Lucas’s performance throws one’s interest in the show off in a big way.<