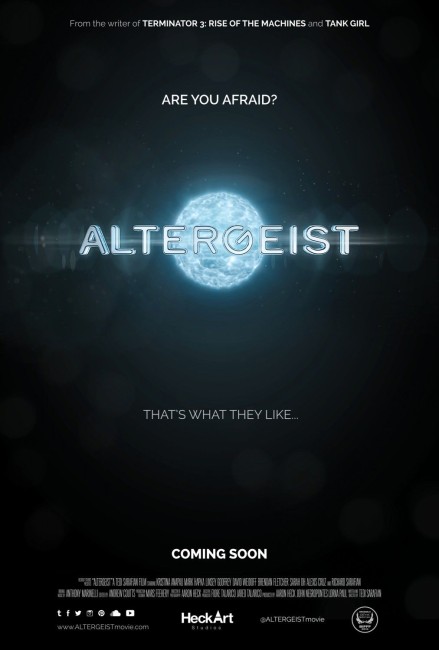 A group of ghost hunters head to the reputedly haunted King’s Ransom winery in Guerneville, California with the intent of shooting footage of whatever they encounter. The estate has a troubled past. As they set up their equipment and begin filming, ghostly figures and mysterious balls of light begin to appear.

Altergeist is a ghost story that is about as generic as they come. The ghost story itself is a genre that has been mined to a point of almost complete exhaustion by countless films usually made for dvd and cable release since the latter half of the 2000s. The very premise of ghost hunters investigating a haunted property and encountering something has itself been ground down by the Found Footage genre – you half-expect Altergeist with its ghost hunters wandering around with cameras to emerge as a Found Footage film but, aside from various interspersed camera-eye shots, it is not.

To his credit, director Tedi Sarafian does try to do something different with the ghost story (or at least the formula of the genre). The characters are created with some conflicts, which give them the appearance of more depths, although none of these are developed anything beyond a couple of scenes and crucially prove to have nothing to do with the rest of the story. And when it comes to the haunted house aspect, Tedi Sarafian’s scares and jumps are tepid and eminently forgettable.

The film does take a strange left field turn at the end, which makes it somewhat interesting. Throughout we get various balls of white light seen moving through the house, akin to something out of a Spielberg-influenced UFO film of the 1980s. You keep wondering what these are as they seem to be pushing Altergeist into the arena of the UFO film than the ghost story you have assumed you are watching.

The film does reach a bizarre ending where [PLOT SPOILERS] the lights are revealed to be creatures from elsewhere (although it is never specified if they are aliens or supernatural in nature). These beings bred out emotions aeons ago and appear to have come to Earth to conduct an experiment to reproduce the emotion of fear so they can transplant it back into themselves. It is about this point that the plausibility of the explanation starts to badly fall down. The film does go out with an interesting final twist where Kristina Anapau comes around to the realisation that she is now one of the black-and-white ghosts.

Tedi Sarafian is the brother of director Deran Sarafian. Tedi wrote the scripts for Deran’s Roadflower (1994), as well as Tank Girl (1995), Terminator 3: Rise of the Machines (2003) and The Possession of Michael King (2014). Altergeist was his directorial debut.