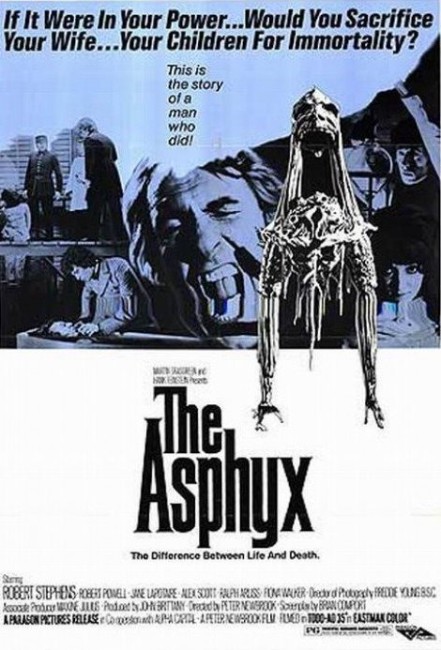 aka Spirit of the Dead

In 1875, while conducting a photographic study of the dying, Hugo Cunningham succeeds in photographing what he realises is the asphyx, a spirit that is trapped eternally attached to the human body and can only achieve release by riding out on the pain of the dying. Cunningham discovers he can trap the asphyx in the beam of a phosphate lamp and that by so imprisoning it, it is possible to achieve immortality.

This rather ingenious little film is one of the lesser recognised efforts to emerge towards the latter days of the Hammer-inspired Anglo-horror cycle that ran from 1957 until around 1976. It was the only film ever directed by Peter Newbrook, who had gained some credit as second unit photographer on Lawrence of Arabia (1962), although Newbrook had also produced Corruption (1967), Incense for the Damned (1969) and Crucible of Terror (1971).

The Asphyx is somewhat reminiscent of the old William Castle B-thriller The Tingler (1959). It emerges as though Hammer Films or one of their imitators had taken The Tingler and beautifully reconstructed it as a scientific fable from the Victorian Age of Reason.

It is a conceptually audacious film – it has an impressive and original idea (of conducting an experiment to capture the spirit of death) that is well above the average horror film. Director Peter Newbrook allows it to unfold with a fascination that holds one spellbound. The scenes of the amorphous asphyx struggling in the incandescent blue phosphate beam accompanied by an unearthly shriek are genuinely eerie.

The Asphyx was not a success when it came out. It was criticised by some as slow moving but that is hardly a fault. The scripting becomes a little murky towards the end when one tries to work out exactly what Robert Powell’s motivation is in blowing himself up. The film benefits hugely from a nicely realised sense of period atmosphere, which is economically conveyed on a medium-range budget.