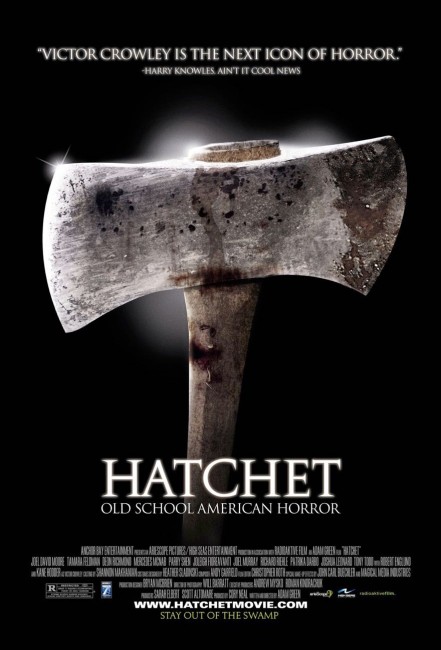 Ben is upset by the break-up with his girlfriend and unable to enjoy himself during the New Orleans Mardi Gras. He sneaks off with his friend Marcus in tow and decides to join a haunted swamp tour. They set out with a party of various others in the dubious swamp boat operation run by Shawn, only for the boat to break down in the middle of the bayous. On land, they find themselves near the cabin of the legendary Victor Crowley, a hideously deformed child who was tormented and then eventually burned alive by other children. Victor proves to be very much alive and now starts hunting them.

Horror cinema of the 2000s has become very much wrapped up in referencing the 1980s, which would appear to be the time period that most of the people making contemporary horror films grew up. We have seen a huge revival of the George A. Romero-styled zombie film, as well as remakes of a great many 1970s/80s titles. The slasher film was revived, parodied and deconstructed a few years earlier with Wes Craven’s Scream (1996), which in turn produced a number of copies. Hatchet is another entry that clearly remembers the 1980s slasher film.

Hatchet pays tribute to Friday the 13th (1980) – Victor Crowley is intended as a homage to Jason Voorhees, the point being made direct by the casting of Kane Hodder, best known for playing Jason in several of the Friday the 13th sequels, as both the deformed hulking killer and his father. The film also comes with a Friday the 13th-modeled surprise ending with people in a boat being surprised after thinking that the hulking killer is dead.

As is almost requisite for this type of film, there is a line-up of genre cameos, including Freddy Krueger himself Robert Englund as the redneck father who gets slaughtered in the opening scenes; Joshua Leonard, one of the victims in The Blair Witch Project (1999), as Englund’s son; Candyman series star Tony Todd as a tour guide; and John Carl Buechler, a makeup effects man and occasional director for many cheap Empire Films of the 1980s, as a crazy fisherman who tries to warn them away.

Hatchet is exxxxxxxtremely gory. Director Adam Green clearly has an enormous amount of fun piling the excess on and taking everything to extremes. We get scenes with Patrika Darbo getting the top of her head torn open; where Robert Englund and Joshua Leonard are torn apart in the opening moments, which ends with literally buckets of blood being thrown at trees; Joel Murray’s head being twisted around and spraying blood everywhere; Perry Shen being beheaded with a shovel; Mercedes McNabb’s arms being torn off and so on.

On the other hand, Hatchet is not a particularly standout or original genre entry. It is however competently well made, which certainly stands it above the majority of slasher films just from the starting line. An added bonus is the undeniable sense of humour that Adam Green gives the film. Particularly amusing are some of the airhead lines that the two bimbos come out with in their mutual bitch fight – “Are you sure the number is 911? Maybe you have to type in a different area code?” and “You do know the vibrator goes in your cooch and not your ear, right?” or the debate that goes “I’m going to call the police and they’re going to send the cops.” “They’re the same thing,” “Are not.”

On the other hand, the film lacks the cleverness of playing and wrapping itself around genre cliches that something like Scream had. All that Hatchet seems to have in its favour is a sense of humour and an extremely high level of gore. That is enough to make it an amiable entry but does not elevate the film to the various modern classic hyperboles that some genre purveyors were reaching for when it came out.

There were three sequels Hatchet II (2010), Hatchet III (2013) and Victor Crowley (2017). Adam Green returned to write and direct the first sequel write but wrote and handed the directorial chair to someone else for the second, before returning to direct the third.

Adam Green subsequently went onto make Spiral (2007), a study in disturbed psychology; Frozen (2010), a survival horror about a trio of people trapped on a ski chairlift; the The Diary of Anne Frankenstein episode of the spoof horror anthology Chillerama (2011); and the Found Footage monster film Digging Up the Marrow (2014); as well as created/produced the tv series Holliston (2012-8). Green also produced the pregnancy horror film Grace (2009).