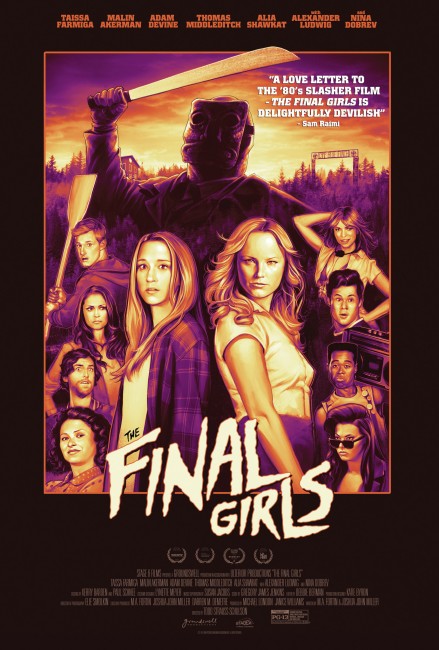 Max is the daughter of Amanda Cartwright, the actress who played a role in the seminal 1980s slasher film ‘Camp Bloodbath’. Her mother is then killed in a car crash. Three years later, Max is struggling through school when she is persuaded by the nerdish Duncan to come to a revival screening of ‘Camp Bloodbath’. She and several friends attend, only for a freak accident to set the theatre on fire in the midst of the screening. To escape, Max picks up a prop machete and cuts a hole in the screen. Instead, they find themselves transported to what they realise is the summer camp of ‘Camp Bloodbath’ alongside the characters from the film. Their modern ways come up against the one-dimensional writing of the characters in the film but Max takes the opportunity to befriend Nancy, the character who was played by her mother. The film’s hulking hockey-masked killer Billy Murphy is lurking. They set out to prevent the characters from being killed by stopping them from having sex, although this proves harder than they think after they start disrupting the film’s plot and then being killed themselves.

The Final Girls was the third feature film for director Todd Strauss-Schulson who had previously made of all things A Very Harold and Kumar 3D Christmas (2011). The film gained enormously positive word of mouth after its appearance at various film festivals in 2015.

The slasher film was at its heyday between around 1980 and 1983 following the successes of Halloween (1978) and Friday the 13th (1980). These led to a great many sequels and imitators, all filled with similar masked, hulking killers and teenagers partying, having sex and so on before being sadistically killed where one of the star makeup effects artists of the day would take great delight in devising novel methods of despatch. The slasher movie burned out within a relatively short space of time but it created a strong imprint and clearly affected the memories of many modern filmmakers who grew up in the era.

The first of the postmodern slasher films came with Wes Craven’s Scream (1996), which slyly turned the slasher into a meta-fiction where the characters and victims were constantly comparing their actions to how people in genre movies would act. Scream in turned produced a revival of the slasher film for the 2000s – plus a good number of remakes of the 1980s originals – although here the victims tended to keep their clothes on and be more genre self-aware, while many of the actors from the originals also made cameo appearances. Scream also inspired a number of other films such as Cherry Falls (2000), Behind the Mask: The Rise of Leslie Vernon (2006), Stage Fright (2014), tv’s hilarious Scream Queens (2015-7) and to some extent The Cabin in the Woods (2012) that wittily mocked the conventions and cliches of the genre.

The Final Girls might have the cleverest take on spoofing the slasher film of any of these – it is a meta-fiction where a bunch of everyday characters, including the inevitable trivia-quoting slasher movie fan, are transported inside the reality of a slasher movie a la Last Action Hero (1993). The result is one of the out and out funniest parodies of the tropes and cliches of the slasher movie.

Over and over the film comes with side-splittingly witty digs and gags – from Adam Devine’s hilarious spoof of a one-dimensional macho jock to the scene where Thomas Middleditch as the nerd of the group stands up to deliver a lecture as to why none of them can get killed because they are not characters, even poses for a selfie with the Jason figure, only to then get a machete in the head. There is a very funny scene where the group are flipping out as transparent blobs start trickling down all around them, only to then find everything has turned black-and-white and they are in the midst of a flashback whereupon they promptly trip over the sign on the ground that announces it is ‘Summer 1957’.

The film also gets a great deal of mileage out of the contrast between modern savvy twentysomethings and 1980s teens – the latter trying to make sense of terms like Pilates or the baffled look when Alexander Ludwig casually mentions to Adam Devine about his two gay dads, and especially Angela Trimbur puzzling over a cellphone and trying to slot it into the tapedeck of ghetto blaster. Malin Akerman gets excited about not having lost her virginity: “Now I’ll be able to save myself for George Michael after all,” which gets an eye-rolling response from Nina Dobrev “I wouldn’t hold my breath, honey.”

The cast are all fine in their roles. Alexander Ludwig played the young male in the also excellent Final Girl (2015) only a few months earlier to some confusion, although that was a part – as a smilingly handsome psychopath – that was at 180 degrees removed from the regular male lead he plays here. A former child actor, the two of these show Ludwig as a promising adult actor.

Malin Akerman feels about ten years too old to be playing alongside a group of teenagers but the film does make a very nice character arc about mother-daughter reconciliations and the girl pegged as bimbo victim in a slasher film who comes to understand there is another whole world out there. It oddly enough feels like the first time in a slasher film where you are made to care about a victim’s death.

Todd Strauss-Schulson next made Isn’t It Romantic (2019) where a woman similarly finds herself trapped inside a romantic comedy.

(Tie for Best Original Screenplay at this site’s Best of 2015 Awards).