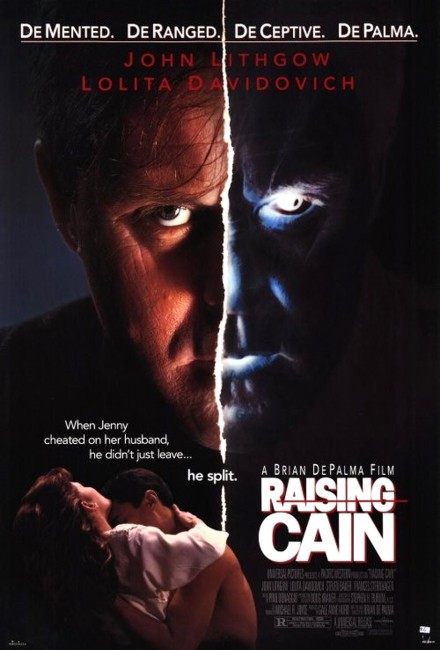 Child psychologist Carter Nix is abducting children with the aid of his evil twin brother Cain. They take the children to their father for use in his psychological experiments. Carter then murders his unfaithful wife and abducts their daughter Amy. As Carter is apprehended, it is discovered that his father is dead. A psychologist realises that Carter was the subject of a series of experiments by his father in creating multiple personality disorder and that both Cain and his father exist only in Carter’s imagination.

Raising Cain was Brian De Palma’s return for the first time in nearly a decade to the psycho-thriller genre he first made himself known in in the 1970s with the likes of Sisters (1973), Dressed to Kill (1980), Blow Out (1981) and Body Double (1984). (See below for Brian De Palma’s other films). In the mid-80s, De Palma renounced much of his work in the psycho-thriller genre (which had attracted a number of attacks from feminist groups) so why he chose to return to the genre with Raising Cain is a mystery. Perhaps he needed to return to commercial safety after the public pillorying he received for the disaster of The Bonfire of the Vanities (1990).

In all respects, Raising Cain is Brian De Palma as usual – the plot reads like a veritable list of familiar De Palma themes and directorial flourishes that one can tick off – the double-identity confusion; the person with a psychopathic split personality; the shock sequence that is revealed to be a dream; the extended flashback sequences; the long dreamy journey; the clues relayed through pictures not words.

There are a number of sequences that demonstrate some of De Palma’s old flourishes of style – in one sequence near the beginning, John Lithgow has drugged Teri Austin but is unable stop her head from lolling as two joggers near; or the dreamy sequence where Lolita Davidovich discovers she gave Steven Bauer the wrong present. There are times that the film also becomes a celebration of Brian De Palma at his worst.

The flashbacks and long pointless dream sequences seem to take over to the extent that for a good part of the middle of the film one is in the dark altogether as to what is supposed to be dream and what is supposed to be flashback (although not to do De Palma a disservice, he does at least make it all clear eventually). In the documentary De Palma (2015), De Dalma explains how the affair scenes were actually meant to be the opening of the film but were pushed back because they were not dramatically strong enough, resultingly in a dramatically uneven plot structure.

At the climax of the film, De Palma sets up a directorial tour-de-force of multiple elements and mini-surprises-within-surprises in one sequence as Lolita Davidovich emerges from a lift onto a balcony. It is a superbly engineered sequence but it seems to mean nothing in terms of affect. The plot lacks the gaping logic holes that Body Double had, but it still contains a ludicrous degree of contrivation that is completely divorced from even the remotest resemblance to human behaviour.

Raising Cain feels routine. What has happened is that during the period of Brian De Palma’s absence from the genre, the psycho-thriller has changed. At the time that Raising Cain was made, the yardmarks of the genre had become The Silence of the Lambs (1991) and Basic Instinct (1992). De Palma’s roots lie with Psycho (1960) and its imitators, psycho-thrillers that contain flourishes of improbable Freudian psychology and founder in gender role confusion.

During De Palma’s absence from the genre, Basic Instinct brought all the sex out into the open, while The Silence of the Lambs created the master killer who is beyond the straight-jacketings of mere psychological motivations and Fatal Attraction (1987) gave us a psycho-thriller wherein the psycho was directly tied to contemporary middle-class anxieties.

Against this, De Palma’s flourishes of style for their own sake, his absurdly melodramatic contortions of human psychology, his relegation of sex to something twisted and guilt-ridden rather than something open and guilt-ridden cannot help but seem out of date. The film could perhaps have been saved by John Lithgow who has been handed the opportunity to give what could have been a tour-de-force of a performance but does little with it.