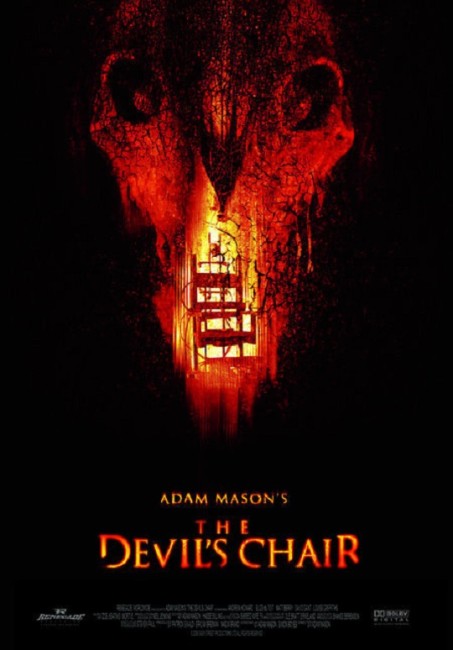 Nick West sneaks into the abandoned Blackwater asylum with his girlfriend Sammy to fool around and take some acid. They find a strange chair there, which comes to life as she sits in it. Afterwards, Sammy has vanished and Nick has no clear idea what happened. He is incarcerated in a psychiatric institution, believed to have killed her. Four years later, due to psychiatric treatment, Nick has now come to believe that what he saw was a delusion. He is released on special orders into the care of academic Dr Willard. Willard has an interest in Dr Blackwater, the psychologist who set the asylum up and was a dabbler in the occult. Willard believes Nick is not crazy and is intending to return to the asylum to ascertain what truly happened. Willard sets up camp in the abandoned building with Nick and his three assistants and starts to look into Dr Blackwater’s occult experiments. As Nick gives dire warnings of what will happen, various of the assistants sit in the chair – only for it to come to life, dig devices into their body and whisk them into another dimension where they become the prey of a demon figure.

The Devil’s Chair was the third film from up and rising British director Adam Mason. Mason had previously made The 13th Sign (2000) and Dust (2001) and would considerably impress with his next film, the tough and brutal Broken (2006). Mason would subsequently go onto other genre films such as Blood River (2009), Luster (2010), Pig (2010), Hangman (2015) and I’m Just F*cking With You (2019), as well as the script for the Joe Johnston-directed thriller Not Safe for Work (2014). All of these show Mason as a growing and increasingly promising genre talent.

The Devil’s Chair was one of Adam Mason’s earlier films. It comes from a point when Mason was working with lesser budgets and gives the impression that he and his crew had gotten the use of an abandoned hospital or some such facility and decided to set a film around its environs. Mason does try to disguise this with fidgety hyperkinetic camerwork, although this proves more irritating than anything else. Mason’s clear inspiration for The Devil’s Chair was the Clive Barker classic Hellraiser (1987) – this is even mentioned during one of Andrew Howard’s voiceover at one point. The Devil’s Chair could almost be a low-budget Hellraiser (excepting that Hellraiser was a low-budget film itself). Both films follow a similar plot arc where people activate a device that drags them into a separate dimension where they encounter unworldly demonic figures that then slaughter them.

The central upfront idea is nothing particularly original, however what propels The Devil’s Chair from being an efficient horror/gore film to the decidedly interesting is the abrupt and ingenious twist that comes in the last twenty minutes. What has up until that point seemed a horror film about a scientific team investigating the occult forces unleashed in an asylum and encountering an artefact that drags them into another dimension where they are slaughtered by a demon is abruptly turned on its head. Here [PLOT SPOILERS] it is revealed that we are in the midst of a The Cabinet of Dr Caligari (1919) or Shutter Island (2010) type scenario where the other dimensional realm and demon figure are illusions that exist inside Andrew Howard’s mentally disturbed mind and that he has slaughtered everybody. There is a considerable cleverness to the way the film builds up through Andrew Howard’s recovery with dire warnings about being dragged back into the situation, leading us to believe that there is an occult menace in the asylum. The writing and wilful misdirection here is extremely clever. The film ends on a memorable gore-drenched bloodbath before a perfect ending where Andrew Howard departs in a car with his illusionary dead girlfriend sitting beside him.

One of the film’s pluses is Andrew Howard, a regular in all of Adam Mason’s films subsequently. With six foot plus frame, working class accent, shaven bullet head and ice-cold blue eyes, Andrew Howard could almost be a serial killer version of Jason Statham. Since The Devil’s Chair, Andrew Howard’s career has been on the rise, he having had bit parts in Guy Ritchie’s Revolver (2005), Woody Allen’s Cassandra’s Dream (2007), Transformers: Revenge of the Fallen (2009), Limitless (2011) and a memorable turn with an amazingly convincing Southern accent as the sheriff in the remake of I Spit on Your Grave (2010). Adam Mason and his regular co-writer Simon Boyes deliver some particularly captivating voiceover dialogue for Howard.