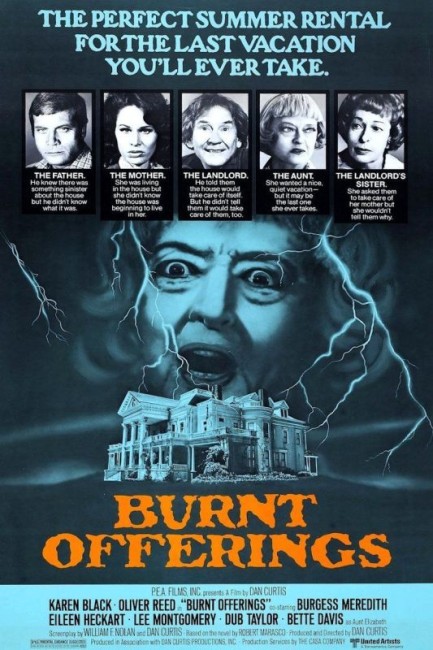 Ben and Marian Roth find a large old rundown country house being offered incredibly cheaply and take a summer lease. Once they move in, Ben finds himself prone to strange outbursts of violence, while Marian spends all her time upstairs tending the old lady that nobody else has met. As strange accidents befall each of them, the house appears to be drawing on their suffering to physically rejuvenate.

In the early 1970s, producer Dan Curtis was a major genre contributor. Curtis began work as a producer on the cult Gothic soap opera Dark Shadows (1966-71) and directed/produced both of the film spinoffs House of Dark Shadows (1970) and Night of the Dark Shadows (1971). Dan Curtis then produced and occasionally directed tv movie adaptations of a number of genre litarary classics – The Strange Case of Dr Jekyll and Mr Hyde (1968), Frankenstein (1973), The Picture of Dorian Gray (1973), Dracula (1974) and The Turn of the Screw (1974). Curtis also made a number of original tv movies, including The Norliss Tapes (1973), the anthology movies Trilogy of Terror (1975) and Dead of Night (1977), as well as the cult hit The Night Stalker (1972) and its sequel The Night Strangler (1973).

Dan Curtis has co-written the script for Burnt Offerings with William F. Nolan, a veteran sf and thriller writer, who wrote The Norliss Tapes, The Turn of the Screw and Trilogy of Terror for Curtis, but is best known for co-authoring the novel that became the basis for Logan’s Run (1976). They in turn adapt a 1973 novel from Robert Marasco, a minor horror writer who also authored the Catholic boys boarding school Gothic Child’s Play (1972).

Strictly speaking, Burnt Offerings is not a haunted house film – it is more a psychic vampire house film – but in all essential regards it conforms to the traits of the haunted house genre. The film’s one novelty is the concept of the house itself. There are no ghosts here, just an ominous house that appears to feed on malice, physically renovating itself with each accident or death. There are some reasonable effects in the scenes where we see the old boards physically crumbling off the house to reveal brand new ones underneath.

Unfortunately, this remains a good idea, nothing more. Dan Curtis lets the film unfold at a plodding pace. It is almost as though he was conceptually still making another tv movie. He even plods along like he was trying to pad time between commercial breaks. Everything is shot through with a wistfully autumnal lens that wrings any atmosphere of foreboding out of the film. It seems to take forever to wind up to surprises – that the house is regenerating, that there isn’t anybody upstairs – that the audience has guessed over half-an-hour before.

Oliver Reed proves a solid trooper, while Bette Davis is okay in a filler role as the auntie, although gives the impression she wants to get her teeth into something more substantial. Karen Black, who became famous in her cult role in Dan Curtis’s Trilogy of Terror, gives a bland performance that lacks much conviction. The one other complaint is that the title Burnt Offerings is a misnomer – there are no sacrificial offerings being made, nor anything or anybody that ever gets burnt.