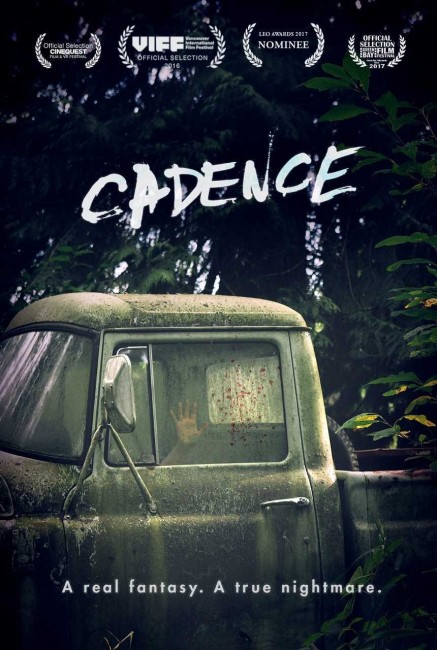 While her parents go away for two weeks, teenager Cadence Fisk is preparing to relax on their farm with her boyfriend, rock star Taylor Lake, as he reaches the end of his tour. They happily reunite but Cadence is troubled after seeing visions of figures murdered and hearing noises in the house. Taylor’s two friends KC and Jay then turn up but Cadence dislikes them being there, especially KC’s obnoxious attitude. She wants them to go but they are reluctant. They push her to hold a paintball game to decide whether they can stay one more night. Cadence is shocked during this when she shoots Jay with her paintball gun only to find that he has been shot for real.

Cadence is a debut film for Canadian director Alex Lasheras who had previously made several short films.

It took me a long time to get into Cadence. It seemed a capably well-made film. It is a well-shot and certainly does not look made on the low-budget it was. On the other hand, it is vague about what is happening. Lasheras seems to mount scenes that suggest something ominous is about to happen but never pushes the jumps for anything that rattle an audience. None of the first two-thirds of the film did anything interesting. It takes a long time for the film to get past the teen romance and mood to actually go anywhere.

However, Alex Lasheras then does an M. Night Shyamalan on us and abruptly, confusingly switches from the teen horror film to a different scenario that takes place in the same location and features all the same supporting characters but a different, younger Cadence. Here incidents and the roles people play happen quite differently, with both scenarios working as parallel realities that mirror the other – Taylor’s two friends are now two hicks that have camped on the farm; the mother has the scar; Taylor is not Cadence’s boyfriend but the pop star she idolises who she learns has met a tragic accident; her father picks the missing axe when he hears noises and so on.

I was reminded a good deal of Afraid of the Dark (1991), a British art film that tells one story then does an abrupt reversal to show that this is just one boy’s paranoid view and that the world is actually a very different place where the details between two perspectives reflect one another but not quite. You get the same sense here. The other film one was reminded of was Passion of Mind (2000) in which we had two Demi Moore’s on either side of the world who each dream of the other’s life when they go to sleep and how these mirror each other.

This second part worked quite well with a distorting mirror effect. No real explanation is offered for the two points-of-view. Disappointingly, the Q&A that followed the screening afterwards at the Vancouver International Film Festival revealed that Alex Lasheras lacked a clear idea what was going on himself. There he stated that he first intended one of the Cadences to be a ghost and then that this was changed throughout shooting to become about a teenage girl going through a fugue state as a result of a traumatic incident.

That disappointingly makes Cadence into no more than another film like Abandon (2002), Identity (2003), Secret Window (2004), Black Swan (2010), Shutter Island (2010), The Ward (2010), Dream House (2011), Goodnight Mommy (2014) or Lavender (2016), all of which create absurdly contrived psychological fugue states for the purpose of conducting a contrived left field conceptual reversal on us. Moreover, you cannot help but feel that a film that can be so interchangeable about its big reveal is one that has not been particularly well thought out beforehand.