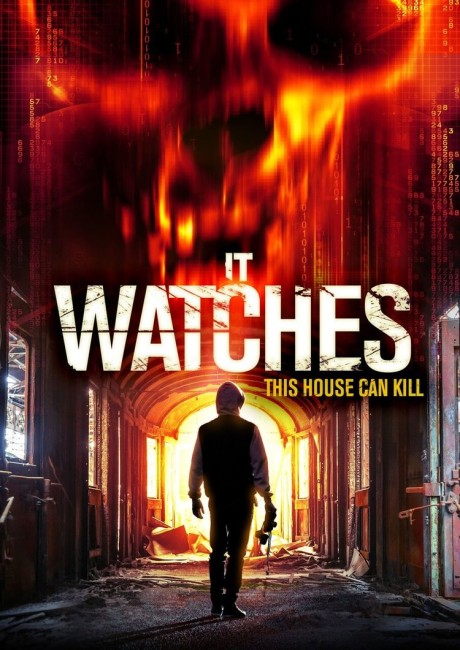 Andre is released from hospital, recovering after an accident in which he has suffered partial memory loss. He is put up in a house that his friend Robert has been house-sitting after Robert is called away on work. Settling in, Andre comes to believes that figures are lurking around the house and sees things possibly moving. When he invites lady friend Rachel over, the neighbour Guy comes by to pass on a police warning about escaped convicts in the area but begins to act threateningly.

It Watches has clearly been made on a low budget. It gives the impression that Parker, frustrated with trying to find money for something better budgeted, grabbed a digital camera and shot something off the fly in and around his or his leading man/co-writer/co-producer Ivan Djurovic’s home. Much of It Watches has been shot with handheld camera – it could easily have been made as Found Footage.

With news of the remake of It (2017), there were a preponderance of It- titled films we had around the same time – It Lives in the Attic (2016), It Stains the Sand Red (2016), It Comes At Night (2017). It Watches feels like it has jumped aboard the bandwagon and been slapped with a soundalike title – even though we never get any indication what the ‘it’ that is watching might be.

It Watches is a micro-budgeted film but David Parker ramps up a reasonable degree of tension out of the house filled with strange artwork and scenes where Ivan Djurovic discovers cameras set up watching him or photos that reveal the house’s owner has been stalking the girl he has invited over on a date. The creepiest scene is where Ivan Djurovic settles down with his date with Sanny Van Heteran and they receive a visit from neighbour James Duval who says he has a warning from the cops that there are escaped convicts in the area. While Djurovic is away checking the doors are locked and Duval and Van Heteran are left alone, Duval suddenly turns on her and starts asking questions about whether Djurovic has had sex with her and then comes menacingly close, telling her to leave and then putting on a pair of gloves “because he doesn’t want to leave fingerprints.” When Ivan Djurovic returns, she has gone and the rest of the film leaves us with the uneasy feeling that something bad has happened to her.

Where the film’s potentially interesting head of steam falls apart is when it comes to the ending. This is a post M. Night Shyamalan ending where everything we assume is turned on its head. [PLOT SPOILERS]. Here we learn that Ivan Djurovic is in fact a serial killer but was suffering from one of those bizarre amnesia/fugue states that exist only in thriller fiction rather than real world psychiatry where he had no memory of being a killer following an accident. For reasons inexplicable, the police decided on an absurd set-up where they left the amnesiac killer Djurovic alone in a house on the pretext that he is looking after the place for a friend who was house-sitting for someone else. It baffles credibility that the police would create this set-up while choosing to ignore the mountain of evidence in the house that Djurovic was a serial killer – like actual videotapes of him torturing and killing people. For reasons that would surely make any sane police captain question the safety of the operation, they also allow him to invite a girl over for a date. The end of the film leaves you confused whether Djurovic being a killer was split personality or some bizarre form of amnesia, or even whether James Duval was a real neighbour or for that matter what happened to Sanny Van Heteran.