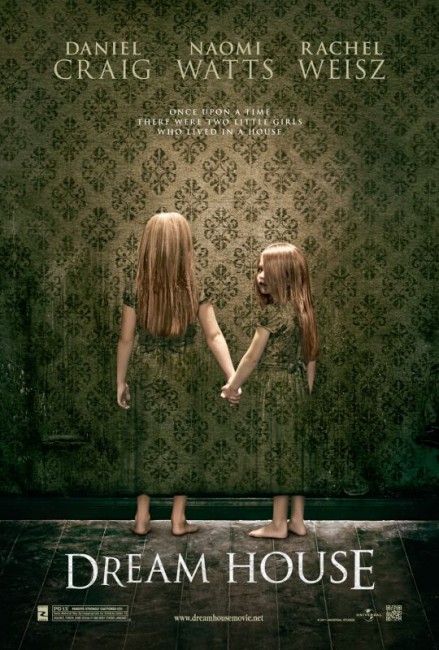 Will Atenton leaves his job as a book editor in New York City and retires to the small town of New Ashford with his wife Libby and their two young daughters Trish and Dee Dee in the new house they have brought there. Soon after he arrives, strange things begin happening. Will discovers that the house was previously owned by Peter Ward who lost his mind and slaughtered his entire family. He learns that Ward has been released from a psychiatric institution and believes that he has returned and is stalking Libby and the girls. His determined pursuit of the trail of Ward takes him to the psychiatric institution, only to find that the doctors there insist that Will is Peter Ward, that he killed his family and that Libby and the girls only exist inside his mind.

Dream House may well be the last gasp of M. Night Shyamalan-ism. That is to say the end of the genre fad that came about for several years after The Sixth Sense (1999) where Shyamalan and a host of others created films that came with sudden last minute surprise reversals of expectation that revealed that everything we had assumed throughout was not the case at all.

One of the better latter day Shyamalan copies was Martin Scorsese’s Shutter Island (2010) with its abrupt reversal to show that the sinister activities apparently going on at an asylum were all taking place in the damaged mind of Leonardo DiCaprio, who was a patient there haunted by the fact he had murdered his wife and children. Dream House feels like a blatant attempt to copy Shutter Island – man moves into a house with his family, thinks it haunted and/or that a killer is stalking him but then discovers his past as a psychiatric patient and realises that the family and home he sees are hallucinations in his mind due to his refusal to confront the fact that he killed his own family.

Now, normally I would accompany the above paragraph with a plot spoilers alert for any readers who wish to avoid having the main surprise of the film ruined for them. In the case of Dream House, I have chosen not to – for the simple reason that Dream House itself gives the main surprise – that Rachel Weisz and the children do not exist and that Daniel Craig himself is the wanted killer – away in its trailer. This way well be the most miscalculated publicity campaign in recent years and the worst case of “seen the trailer, seen all you need to see about the film itself”. Try and imagine if the trailers for The Sixth Sense had announced that Bruce Willis was dead before you went in to see the film or if Shutter Island had stated that Leonardo DiCaprio was a psychiatric patient all along.

With the spoiled surprise in your mind, you spend about the first hour of the film as Daniel Craig discovers that he lived in the house where a killer did and believes that Peter Ward is now targeting his family waiting to get to the point we remember from the trailer where the doctor at the asylum (Brian Murray) patiently explains to Daniel Craig that he is Peter Ward. It feels impossible to engage with any of the suspense when we know from the outset that we are only being misdirected. Critics and audiences responded with overwhelming negativity and Dream House died a quick death at the box-office.

Production company Morgan Creek’s choice to give everything away in the trailer was such an ill-advised decision that stars Daniel Craig and Rachel Weisz (who both met on the set and later married) refused to take part in the publicity campaign for the film. There was also the highly contentious issue surrounding Morgan Creek have a bad habit of interfering with final cuts of films when it comes to genre films – insisting that additional material be shot to spice up both The Exorcist III (1990) and Nightbreed (1990) and most notoriously dumping Paul Schrader’s original Dominion: Prequel to the Exorcist (2005) and having the entire film reshot as something more visceral with Exorcist: The Beginning (2004). Here they announced themselves unhappy with the unscary film that director Jim Sheridan turned in and conducted reshoots. This resulted in Sheridan suing (although failing) to have his name removed from the credits and publicly denouncing Dream House following its release.

I thought for a time that Dream House might be being far cleverer that I was giving it credit for and perhaps using the trailer to mislead an audience where it would proceed to subvert this with a further twist. However, this turns out not to be the case. After we get to where all is explained to Daniel Craig, there are various scenes with him trying to argue with Rachel Weisz that she and the girls are dead. Maybe the only interesting thing that we get here is how the film hovers in a state of ambiguity as to whether they are solely in his imagination or are ghosts, with the film appearing to eventually come down on the side of the latter. The only other twist that Dream House proceeds to put on the premise is to then give us a guessing game of who the real killer was. This is not particularly sophisticated in terms of its answer – one needs no look no further than the suspect who has a permanently mean disposition and the figure that lurks around on the periphery of the plot with no defined purpose.

The main problem I had with Dream House was the contrived nature of the set-up. We are asked to believe that Daniel Craig was so traumatised by the sight of his wife and children murdered that he refused to countenance the acts he had conducted and created an entire dissociated identity for himself as Peter Ward. This is movie psychiatry rather than real human behaviour but I was prepared to give the film enough rope here (even if the end reveals that he did not murder them at all). However, we are then asked to accept that he is returned into the community and goes back to his old home, which he proceeds to imagine populated by an entirely new wife and daughters.

Now, I cannot say I know the exact ins and outs of psychiatric law in New York State but it seems to me that psychiatrists releasing a man into the community who was suspected of being a killer and had problems so extreme that he created a state of selective amnesia and an entire new identity for himself inhabited by imaginary people would be opening themselves up to a vast case of neglect if not incompetence – especially if they allowed the man out into the world without any sign of him regaining his old personality or to return unsupervised to the site of the traumatic incident.

Even aside from that, the film has Daniel Craig interacting with various locals in the town – cops, neighbour Naomi Watts and her daughter, a realtor, a group of teens who invade the house – and not one of them ever seem to recognise him or more importantly insist on referring to him as Peter Ward. To me, that is stretching a fantastical notion that the film asks of us way beyond all reasonable credibility.

Jim Sheridan is an Irish director better known for solid dramatic work that draws from his Irish background with the likes of My Left Foot: The Story of Christy Brown (1989), The Field (1990), In the Name of the Father (1993), The Boxer (1997) and In America (2002), as well as writing the Magical Realist Irish drama Into the West (1993). In more recent years, Jim Sheridan has taken on commercial projects in the US mainstream to uneven effect with the likes of the 50 Cent film Get Rich or Die Tryin’ (2005) and Brothers (2009).