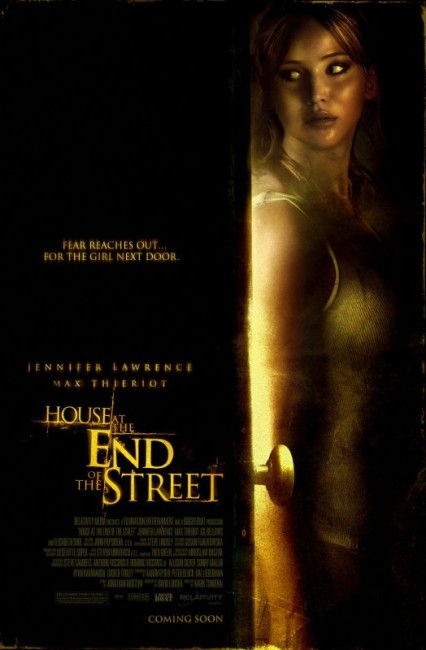 Teenager Elissa Cassidy and her mother move to a new town. After moving into their new home, they learn that they were able to obtain the place cheaply because the house next door was where young Carrie Anne Jacobson went insane and slaughtered her parents several years ago. Elissa then meets and befriends Carrie Anne’s now grown brother Ryan who lives alone in the house, although many of the locals shun him because of what happened. Though her mother tries to keep them apart, Elissa defies her and is attracted to the shy Ryan. What she does not know is that Ryan keeps Carrie Anne a prisoner in the cellar. Elissa’s entrance into Ryan’s world brings out the secrets he keeps.

House at the End of the Street is a psycho-thriller that came out and did modest box-office while earning no good reviews. It gives the impression that it was either quickly slung together after the meteoric rise of star Jennifer Lawrence following the huge hit of The Hunger Games (2012), or else had been a film made prior to that that was quickly retooled for release to theatres to capitalise on her name whereas in all other circumstances it would have been dumped to the arena of dvd/cable.

I was impressed with Jennifer Lawrence’s maturity and strength in The Hunger Games. Whether or not House at the End of the Street was made before or after her success there is a matter for debate. If it was, it shows she is suffering from poor choice and is likely to end up shuffled around in a series of teen roles and will be forgotten before five years have passed; if it was made before her name had risen then it is more excusable as something that a relative unknown takes just to get any job. Certainly, the meteoric rise she has made as an actress in the few years since would more than clearly demonstrate the latter.

The plot set-up – decent teen keeps a mentally disturbed member of his family locked up a prisoner in the basement – harkens back to an older form of crazed relative locked up in the cellar/attic thriller that we saw in works like The Beast in the Cellar (1970), The Unseen (1981) or House of the Long Shadows (1983). You could also draw comparison to a film like The Little Girl Who Lives Down the Lane (1976), which this has many similarities to this in the set-up of the teenager living alone in their house and guarding a secret and the story arc involving the entrance of a romantic interest.

Although House at the End of the Street is like a crazed-relative-in-the-cellar thriller that has been retooled for pretty young teen leads and romance emphasised over the thriller element. In reality, it is a story that you feel would play out better with actors in their thirties – lone woman comes to stay in a new house, befriends and is attracted to the shy, socially shunned man next door etc.

Despite the spate of bad reviews, I started to get into House at the End of the Street. Non-genre reviewers often tend to come down on genre cinema like this a good deal more critically than regular material. Jennifer Lawrence and Elisabeth Shue are fine actresses and play off one another reasonably well. Director Mark Tonderai gives the film a beautifully photographed polish and edits in a way that focuses on the inner strengths of the characters. It was here I was starting to almost believe that House at the End of the Street, generic and all as its plot set-up seemed, had the potential to be more.

Alas, you can almost pinpoint the place where House at the End of the Street dies on screen. It is the point where the film feels the need to pull a M. Night Shyamalan-esque twist about two-thirds of the way in. [PLOT SPOILERS]. Here we learn that Max Thieriot does not keep his mentally deranged sister a prisoner in the cellar after all. What we believed were scenes of him tending her and she trying to get free is in fact him having abducted a series of girls and imagining that they are his sister. The end of the film with him locked up in an asylum, facing the camera just like Anthony Perkins at the end of Psycho (1960), gives the impression that there may not even have been any Carrie Anne at all.

This is a Shyamalan-esque twist ending of the worst order. These Shyamalan-esque endings are manipulative pieces of writing that are essentially dependent on scriptwriters conducting a conjuror’s sleight of hand trick in persuading audience’s to look one way, believing one thing is going on, before pulling the rug out in a big surprise to show us that that wasn’t the case at all. The degree of misinformation that we are given here borders on blatant falsification, and when the big twist is pulled the result is groan-worthy. (Indeed, screenwriter David Loucka’s previous script was Dream House (2011), which was similarly built up around another big mid-film carpet pull from under the audience and the result ended up being a widely pilloried disaster). We have seen far too many M. Night Shyamalan copies in recent years for any of the surprises to be interesting or original any more.

Moreover, the twist is one that ends up giving the film some unpleasant implications. There is a scene where Elisabeth Shue’s mother forbids Jennifer Lawrence from seeing Max Thieriot unless there is another person present. We reel aback from this scene, wondering what is going on here. The scene doesn’t seem presented in any light where we are meant to regard Elisabeth Shue’s actions as anything other than the way a parent would normally act and you cannot help but think that this seems overly harsh and controlling. You suspect that the script is setting this up for later scenes where Jennifer Lawrence rebels against her mother to be with Thieriot. In other scenes, we see Thieriot being treated with prejudice by the locals and a scene where he is bullied and beaten up, which seems set to become part of a standard arc where Jennifer Lawrence falls in love with the strange loner whose sensitivity only she can see.

Alas, the twist ending throws all of this on its head – where it would seem that Elisabeth Shue’s control freak parent was right in her suspicions and that the macho school bully that beats Max Thieriot and the locals who treated him with suspicion were justified all along. In other words, what we have is a film that, whether such was directly intended it or not, comes out on the side of controlling parental authoritarianism and ignorant small town prejudice and even tacitly supports bullying.

In the director’s chair is relative newcomer Mark Tonderai, a British tv director who had previously made the halfway reasonable road movie psycho-thriller Hush (2008). Tonderai has subsequently disappeared into directing tv, although he did subsequently co-write Day of the Dead: Bloodline (2018), before returning to direct the ridiculous voodoo film Spell (2020). The film was originally to be directed by Jonathan Mostow, director of Beverly Hills Body$natchers (1989), Breakdown (1997), U-571 (2000), Terminator 3: Rise of the Machines (2003) and Surrogates (2009), who takes a story credit on the finished film.