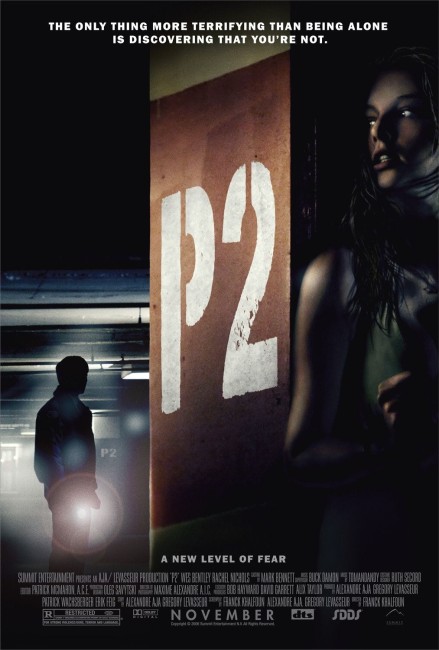 Angela is working late on Christmas Eve in her firm’s office in New York’s Arcadia Building. She is one of the last people to leave, intending to head off to spend Christmas with her sister. As she enters the car park, she is abruptly chloroformed. She comes around to find she has been made a prisoner by the building’s parking supervisor Thomas. He has been watching her for some time and has decided to make her captive while the building is closed for the three days of the holiday. He just wants to become friends, being sure that she will love him given a chance. He has also taken prisoner a colleague who drunkenly tried to force himself onto Angela and urges her to kill him. She makes all effort to escape.

P2 comes from Alexandre Aja, who has made a strong emergence on the horror movie stage in the 00s first with High Tension (2003) made in his native France and then breaking into the English-language market with the remake of The Hills Have Eyes (2006), followed by Mirrors (2008), the remake of Piranha (2010), Horns (2013) and Crawl (2019). With P2, Aja co-writes and co-produces with his regular creative partner Gregory Levasseur but has handed the creative reins over to Frank Khalfoun, who had previously appeared as an actor in High Tension. (The title P2 incidentally refers to one of the various parking levels of the building where the film takes place).

P2 has taken undeniable inspiration from the modern cycle of imprisonment films that began with Saw (2004). The film takes some time to lead in – although it does open with the eye-catching image of the trunk of a car in the parking lot suddenly bursting open and a pair of cuffed hands shooting straight up into the air.

The set-up is standard but once Franck Khalfoun lets the suspense kick in, P2 starts to work rather well. There is a very gory scene where Wes Bentley repeatedly drives a car into Simon Reynolds as he is tied to an office chair, splattering him against the wall and then dragging him away underneath the car.

There are some gripping scenes with Rachel Nichols trying to get out of the office past the vicious security dog and later having to beat the dog to death with a tire iron; trying to use her cellphone to call for help, only to drop it when she holds it through a grille to get better reception; a quite surreal scene where Rachel Nichols tries to escape in an elevator and Wes Bentley floods it with a firehose; she breaking into the rental agency office and calling 911 but being put on hold, only for the call to finally be answered just as Wes Bentley comes; escaping in a car, only for Wes to ram her just as she approaches the exit. At times, the film feels like a single exercise designed to torture Rachel Nichols by dashing every hope she raises.

Wes Bentley, best known as the weird neighbour in American Beauty (1999) and an actor who has kept his profile just bubbling beneath the radar ever since, is cast as the psycho of the show. Bentley has chosen to play the role as a nice guy psycho – the conception of the role is that he is someone who just wants to be Rachel Nichols’ best friend. Unfortunately, this is a role that does not suit Bentley at all – he is too handsome and simply fails to look the type of guy who is socially isolated and has no friends. There are not many shades to Bentley’s character, certainly not enough to be interesting – the friendly psycho is all he has in his arsenal and there is nothing to his performance beyond that. The show however is carried by Franck Khalfoun’s relentless twists.