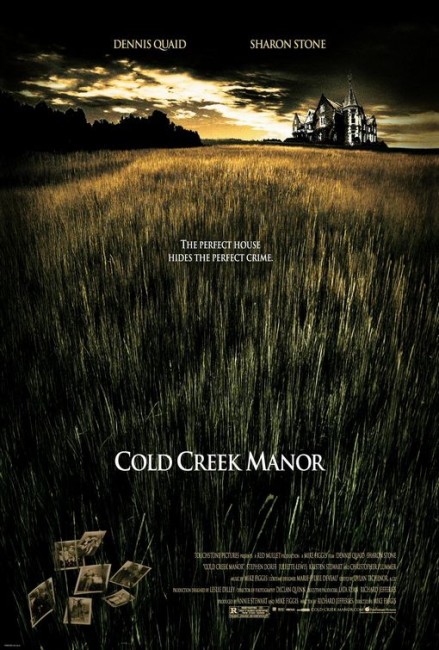 After their young son is nearly run over in the street, Cooper and Leah Tilson decide to give up high-flying careers in New York City and move to the countryside. In rural Bellingham, they buy up the huge old Cold Creek Manor, which is going cheaply, and convert it into their dream house. Cooper finds much material left behind by the previous owners and becomes fascinated with the idea of making a documentary about the house’s history. Dale Massie, the house’s previous owner, then turns up and asks for a job. Cooper hires him but then becomes suspicious after Dale says he has been in jail. When the house is inundated by a plague of snakes, Cooper blames Dale and fires him. Dale then turns nasty, promising revenge. At the same time, Cooper begins to uncover evidence that Dale was responsible for the murder of his own wife and children.

Cold Creek Manor is a film that came out and just as quickly disappeared from theatres without attracting anything but forgettable reviews. It had the appearance of being an effort that should have been worthwhile. Certainly, it had prominent names like Sharon Stone, Dennis Quaid and Juliette Lewis, in the cast (not to mention a completely unknown Kristen Stewart). And at the helm was British director Mike Figgis who has made films such as Stormy Monday (1989), Internal Affairs (1990), Liebestraum (1991), Mr. Jones (1993), The Browning Version (1994), One Night Stand (1997) and Timecode (2001), as well as was nominated for an Academy Award for Leaving Las Vegas (1995).

Alas, Cold Creek Manor goes nowhere. It has all the feel of a name director dabbling in genre material that he otherwise feels beneath him and producing only a warmed-over hodgepodge of cliches. Cold Creek Manor is the sort of torrid Southern Gothic that was being produced in the 1970s – a B movie that has somehow been given an A-budget treatment. The A-budget polish does offer many benefits. Production designer Leslie Dilley conceives a wonderfully Gothic mansion. And an experienced and celebrated director like Figgis knows how to find subtle intonations and nuances in his cast’s performances.

The person who shines in the film is Stephen Dorff who plays with dangerous, sexually charged swagger. Figgis likes to parade him around in bare chest and Dorff exudes a palpable charged threat whenever he is on screen. Eventually though, Cold Creek Manor befalls routine thriller mechanics. It is never a film that hinges around tight twists of plot; rather Figgis hangs it up on contrived pieces of action like car chases and snakes loose in the house. It is competently directed but the twists and plotting that come are unremarkable.

Beneath it all, Cold Creek Manor buys into the same subtext as Backwoods Brutality films like Deliverance (1972) and The Texas Chain Saw Massacre (1974) – of pitting city slickers against Southerners, who are once again typecast as ignorant country hicks. Also, as in Straw Dogs (1971), the progenitor of these films, it is seen that the presence of a sophisticated city woman stirs up something primal in the ignorant locals.

There is a point that Mike Figgis starts to go beneath the tired thriller elements and get inside the characters – Dennis Quaid’s drinking, Sharon Stone being tempted to have an affair and possibly even by Stephen Dorff – but the film never brings these out in any way that is dramatically relevant to the story. For that matter, the film never even tells us why Dale killed his wife and children. For all its’ promise, Cold Creek Manor feels like a B movie that somehow strayed onto a studio’s A-list.