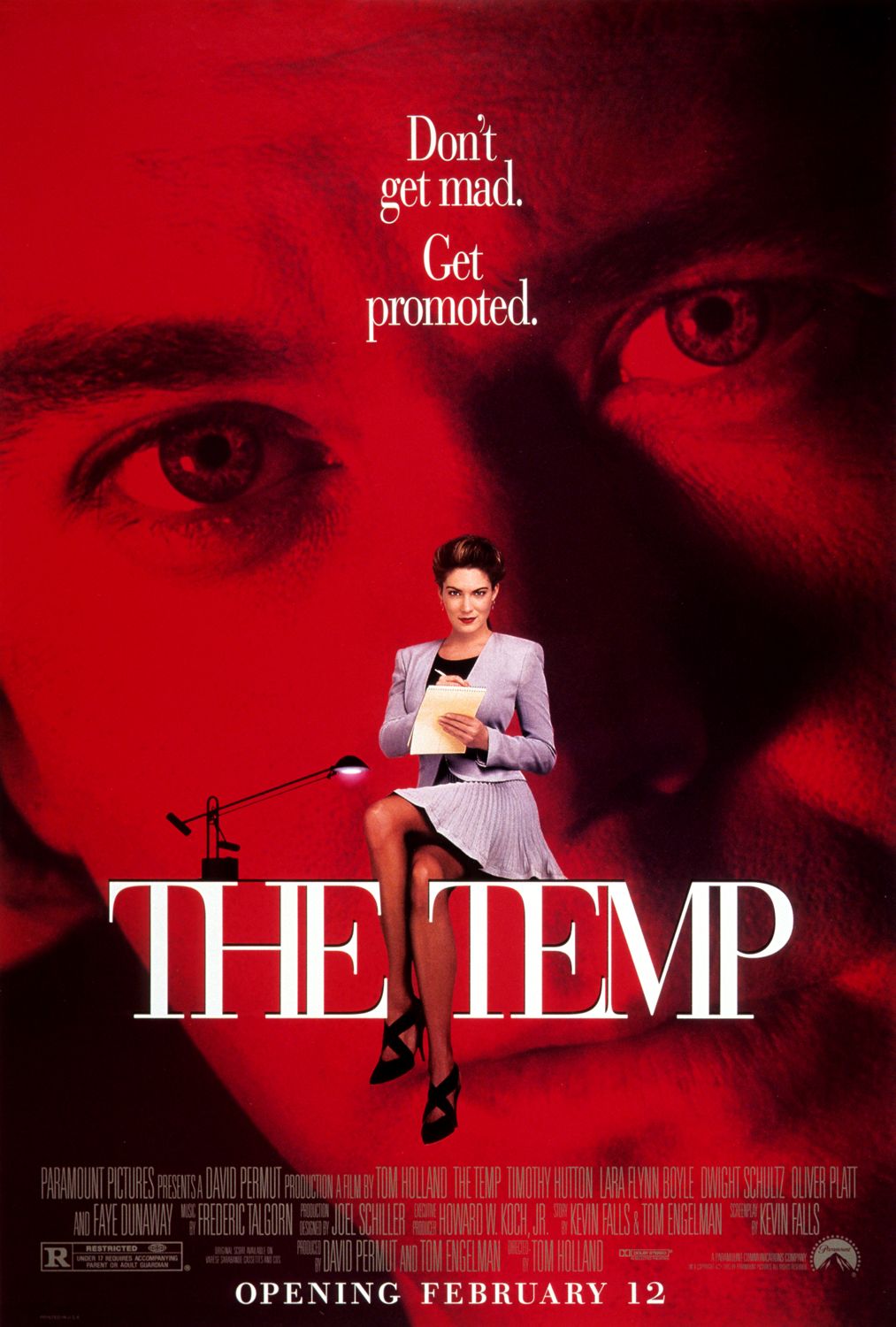 Peter Derns, a marketing executive at the Appleby Cookie Company, gets a new temporary secretary in Kris Bolin. She proves incredibly efficient at reorganising his office. When Peter’s regular secretary returns, his hand gets chewed up in an accident with a paper shredder and Kris is appointed to his job. People around Peter start to meet with similar suspicious accidents and Peter proceeds up the corporate ladder with remarkable progress. When Peter starts to realise that Kris is the one responsible for the accidents, she suddenly gets herself appointed to his old job. He then finds that she is now using the same underhand tactics against him.

Upon its release, a number of critics raced to label The Temp as a Golden Turkey and saw its only merits as unintentional camp. This, one suspects, lies more in the presence of Faye Dunaway and a certain current critical view that seems to regard everything she does these days as high camp. Dunaway certainly takes the opportunity to chew up the scenery, throwing wonderfully dramatic anxiety attacks and making the most of lines like “You’ve got the recipe for crunchy almond on your [computer] menu.”

Certainly, the idea of a psycho film being conducted within the confines of office politics (inside a cookie company, no less) has a good deal of camp potential to it – the environs seem laughably banal. More interesting is the naked view the film offers of the underlying anxieties of the 1990s psycho film. In the psycho film’s migration from the exploitation domain of sundry Halloween (1978) and Friday the 13th (1980) copycats during the 1980s to that of the A-budget thriller in the late1980s/early 1990s in the likes of Fatal Attraction (1987) and Single White Female (1992), the genre suddenly transformed into a hotbed of middle-class anxiety.

During the late 80s/early 90s, the American middle-class (particularly the middle-class male) seemed to have been at a virtual siege – with the uncertainties brought on by the massive corporate restructuring and layoffs; the increasing inroads made by women in achieving equality and against sexual harassment in the workplace; and the desire for equality demanded by minority racial and sexual groups even down to the creation of minefields of philological equality. The Temp reads like a naked exposure of these middle-class male anxieties. It is a single wildly paranoid caricaturisation of women as schemingly manipulative and desirous of usurping the male position in the workplace.

The Temp suffers from some fundamental confusions. It starts out as what seems a smother thriller a la the likes of Fatal Attraction et al with Lara Flynn Boyle obsessively attaching herself to Timothy Hutton, getting rid of people who stand in the way of his success and of her being his secretary. About halfway through, the thrust of the thriller changes and suddenly becomes about her killing her way up to the top of the corporate ladder and the smother relationship turns to one of rivalry. The change of tone jars and the film cannot seem to find a middle-ground between her come-ons and her scheming against him.

The film was apparently heavily interfered with by Paramount who cut out many of the horror elements. What irritates most about it is its sheer predictability – supporting characters virtually have ‘Victim’ stamped on their foreheads, like the moment Oliver Platt swipes a wasp and loudly states “If I was stung by one of those and didn’t get to hospital in time, I’d buy the Big Ranch.”

Timothy Hutton gives an unlikeable performance – he seems so scruffy and uncaring that one wonders what Lara Flynn Boyle keeps seeing in him to get obsessed about. On the other hand, she is perfect for the part. With narrow, freckled face, watery grey eyes, thick painted eyebrows and perpetually nervous edginess, Lara Flynn Boyle’s beauty remains a seductive and threatening enigma. She has one particularly appealing sequence in a lake with Timothy Hutton on an inner tube where she proposes having sex with him right there in front of everybody hidden only by the water. The one other good performance in the film comes from Maura Tierney who comes across as surprisingly open and natural as Timothy Hutton’s wife.

The Temp is probably the worst film made by director/writer Tom Holland who has also made Fright Night (1985), Child’s Play (1988), which started the whole Chucky phenomenon, and the Stephen King adaptations The Langoliers (mini-series, 1995), Thinner (1996) and Rock, Paper, Scissors (2017). Prior to becoming a director, Tom Holland who had previously written the scripts for The Initiation of Sarah (1978), the revenge drama Class of 1984 (1982), the transformation film The Beast Within (1982), Psycho II (1983), the invisible companion film Cloak and Dagger (1984), Michael Winner’s psycho-thriller Scream for Help (1984) and the story for the remake of Fright Night (2011). The psycho secretary film was also done around the same time in The Secretary (1995).