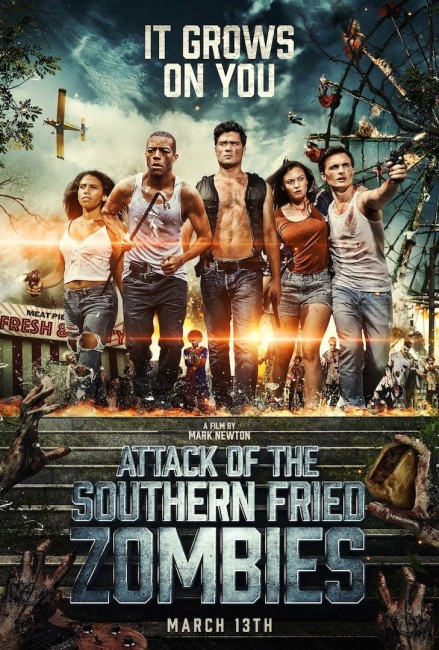 Lonnie works as a crop-dusting pilot in the small town of Charleston, Mississippi. His current assignment is to drop an experimental serum designed by scientists from GloboBioTech to curb the runaway kudzu in the area. Meanwhile, three guys go out to the shack of the drug dealer Creighton to obtain some marijuana only to find Creighton has become a zombie who turns and bites Asher. The others drag the infected Asher back into town where the local music festival and fair is in full swing. The zombie infection quickly spreads. Caught in the midst of this, Lonnie tries to reconnect with and save his ex Kayla even though she is at the festival with another date.

The interesting thing about Attack of the Southern Fried Zombies is that, despite its title, it is not a zombie comedy or made tongue-in-cheek. The tone is light but it takes itself and its characters seriously, never goes outrageously over-the-top nor sits winking at the audience how ridiculous it is being. The film was originally made under the name Kudzu Zombies but was renamed the more tongue-in-cheek Attack of the Southern Fried Zombies when it came to release. This was clearly an attempt to appeal to the audience for the gonzo zombie film even though it ends up misrepresenting the film as a type of comedy it is not.

Not that Attack of the Southern Fried Zombies might not have been helped by planting its tongue-in-cheek. The straight zombie film feels like it has been played out creatively. All the elements here – the scientific experiment that has unforeseen effects, the dead stumbling through town, the hero reconnecting with his lost love throughout the course of the mini-apocalypse, the desperate attempt to get to [fill in the blank] and save the day – are tried and true elements.

About the only major differences is that the film takes place in rural Mississippi – although despite the ‘southern fried’ part of the title, this is of no relevance and the film could be set anywhere in smalltown America – and the zombies have their insides filled with kudzu (a plot element that is barely explored in any way). Everything plays out by the book. The film does mount to a moderately vigorous zombie outbreak where director Mark Newton does a passable job of making digital gore work for him.