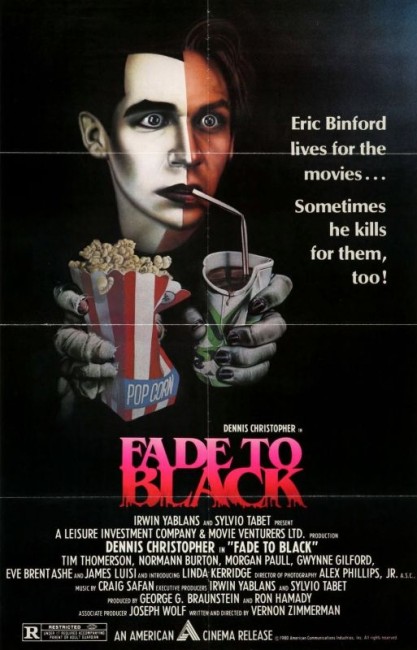 Eric Binford is an introverted young man who works with a Venice, California, movie advertising firm and lives at home with his controlling wheelchair-ridden Aunt Stella. Eric’s only passion in life is watching classic movies. Eric meets and becomes fixated on an Australian starlet who is an exact ringer for Marilyn Monroe – only for her to stand him up on a movie date. When Aunt Stella knocks over Eric’s movie projector, he angrily pushes her wheelchair down the stairs and kills her in imitation of the scene in ‘Kiss of Death’. He now goes out into the world dressed as characters from various movies – Count Dracula, Hopalong Cassidy, The Mummy – and kills those who have treated him badly.

This is an interesting little psycho film from the great era of slasher films. Although it is often slotted in amongst its contemporaries, Fade to Black isn’t really a slasher film. Much more interesting is the fact that it predates the fad for psycho films that obsessively quote and reference other films that began with Kevin Williamson’s Scream (1996). Indeed, Vernon Zimmerman was doing the whole psychos taking their inspiration from other films around about the time that Kevin Williamson was still a pimply teenager sitting in the back row of Halloween (1978) and Friday the 13th (1980) for the first time.

Zimmerman has an original idea for a movie psycho – one who takes his inspiration from movies. In any other slasher film this would merely be the opportunity for a series of classic movie pastiches – as indeed this film does spend some of its time doing. However, Zimmerman is much cleverer than that and explores the idea in some depth and becomes surprisingly playful with it.

Dennis Christopher is not merely a movie-inspired psycho but one that prefers the cinematic illusion to real life. The people he kills are those who disrupt his viewing of films or the illusion that he exists in while watching them. Even his fixated love interest is a Marilyn Monroe lookalike. Zimmerman conducts some wonderful interpolations of imagery:- Dennis Christopher outfitted as Bela Lugosi’s Dracula sitting in a theatre eating popcorn as he watches Night of the Living Dead (1968); a scene where he approaches a streetwalker while dressed as Dracula and his conversation with her becomes a witty variant on Lugosi’s “children of the night” speech from Dracula (1931).

Especially appealing is a scene where Linda Kerridge’s Marilyn Monroe lookalike takes a shower, which immediately becomes a parody of the Psycho (1960) shower scene, whereupon the figure that fulfils the role of Norman Bates sneaking up on her is Dennis Christopher in Dracula costume – but his knife is only a pen – “I only wanted your autograph” – and its spilt ink becomes the blood flowing down the shower plughole.

Footage from other films – Mark of the Vampire (1935), The Creature from the Black Lagoon (1954), the Christopher Lee Dracula/The Horror of Dracula (1958) – is used throughout. Sometimes this is done with clever irony – such as the use of the down-the-stairs murder from Kiss of Death (1947) or the James Cagney grapefruit scene from The Public Enemy (1931) as ironic counterpart to Dennis Christopher’s feelings of frustration with his aunt (Eve Brent Ashe). The climactic scene is elaborately set up to recreate James Cagney’s famous “top of the world Ma” scene from White Heat (1949).

Dennis Christopher was briefly touted as a new emerging name around the time in films like Breaking Away (1979) but his preference for withdrawn introverted characters never allowed him to flourish much as a leading man. A far more interesting name among the cast is a 28-year-old Mickey Rourke who plays a bullying jerk of a co-worker at the place where Dennis Christopher works. Tim Thomerson, a couple of years before he started to find fame in various Empire/Charles Band and other low-budget genre films, plays the investigating detective. Australian actress Linda Kerridge who plays the Marilyn Monroe lookalike was seen at the time as being a star about to be launched on the Hollywood stage but never went onto to do anything else beyond half-a-dozen B movies.

Fade to Black was produced by Irwin Yablans, the man who also produced Halloween and Tourist Trap (1979), posters of which are seen in the background of the advertising firm where Dennis Christopher works. Vernon Zimmerman had made a handful of other undistinguished films such as The Unholy Rollers (1972) and Deadhead Miles (1973). He was probably most famous for writing the drive-in classic Bobbie Jo and the Outlaw (1976). His other genre entries are the scripts for Hex (1973) and Teen Witch (1989).