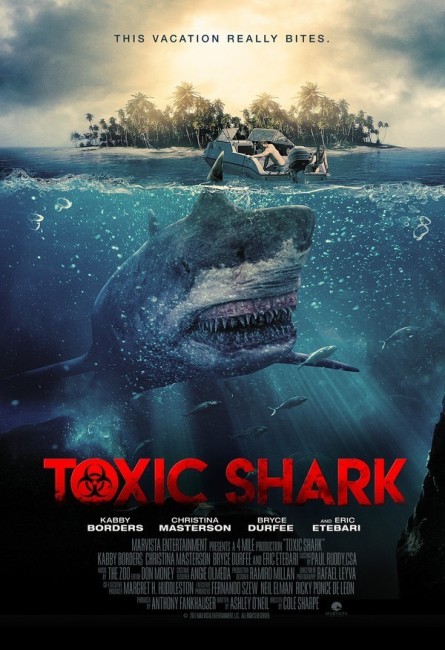 Sam and his two friends arrive at a resort on an island off the coast of Puerto Rico that advertises itself a health getaway for singles. The resort is managed by the shady Reese who is trying to minimise the fact that his staff have been mysteriously disappearing, including an EPA inspector come to check the high toxicity levels of the waters. Sam settles in only to find his ex-girlfriend Eden is also at the resort with two of her friends. Eden’s friend Gabriella returns from a swim in the sea bitten and the bite soon causes her to become red-eyed and crazed. In the water, a shark that spouts a plume of toxic waste is on the attack. With the telecommunications cable to the mainland eaten through by the shark and Reese trying to do everything to minimise the peril, the group try to fight off the shark attacks and find a means of escape from the island.

Amid the plethora of gonzo killer shark films, Toxic Shark is a perfectly average entry – not the bottom of the barrel, not the best there is, simply an adequately made B movie. Unlike ‘Sharknado and most of the titles listed above, it takes itself relatively seriously – it is not constantly winking at the audience or inviting them to join in and celebrate just how ridiculous it is being.

Within its particular genre niche, Toxic Shark is passably well made. The shark effects are cheap but adequate as these films movies go. The shark itself looks good, the effects of it popping up to chomp on people slightly less so. The actors are competent enough – in particular, Eric Etebari who goes to town and gives a highly entertaining performance in the role of a Murray Hamilton-like resort owner who is on the constant hustle. The plot does fall into the hokey in odd places – like the rather absurd scheme to defeat the shark at one point that involves using a bagful of magnets.

On the other hand, this is a film that is somewhat hamstrung by its title. You suspect it could have gotten by perfectly well as B killer shark film. However, in order to pitch itself among the modern gonzo killer shark fad, it has had to append a ridiculous title. Thus in order to justify the ‘toxic shark’ aspect, we have the absurd effect of the shark swimming around spewing a plume of bright green toxic waste out of a borehole just like a whale. Just as in Zombie Shark, the waste (and the shark’s bite) also has the effect of turning people it touches rabid, resulting in a horde of zombie-like figures running around attacking others.