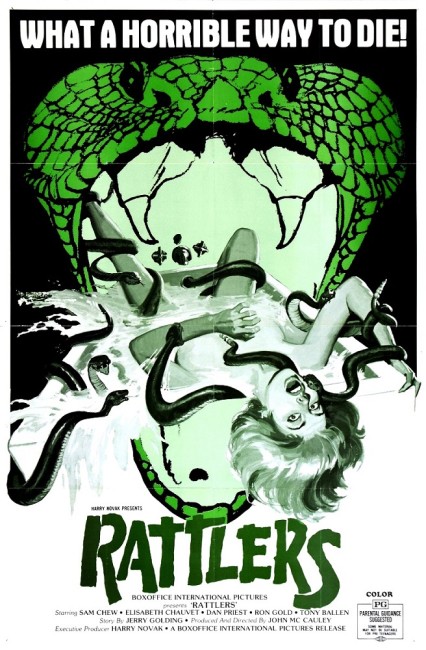 A small town in the Mojave Desert experiences an unusual number of deaths caused by rattlesnakes. Herpetologist Tom Parkinson is granted a leave of absence from his academic position to go and consult. The sheriff’s department assigns Tom the aid of photographer Ann Bradley. The search takes Tom to the nearby military base where the cause may lie in the disused mine where Colonel Stroud has ordered supplies of the biowarfare chemical CT3 dumped.

The 1970s brought a spate of films where animals turn on and attack humanity. The genre was started with Alfred Hitchcock’s The Birds (1963). It was followed with the surprise success of the boy befriends rats saga Willard (1971) and then the blockbuster success of Steven Spielberg’s third film Jaws (1975). Others amid the cycle included Frogs (1972), Chosen Survivors (1974) with vampire bats attacking survivors in a nuclear fallout shelter, the ant takeover film Phase IV (1974), Dogs (1976), Grizzly (1976), the killer worm film Squirm (1976), Day of the Animals (1977), Kingdom of the Spiders (1977), the killer dog film The Pack (1977), the killer bat film Nightwing (1979) and others. (For a more detailed overview of the genre see Animals Attack Films).

Rattlers is not a particularly interesting variant on the genre. To its credit, it does appears knowledgeable about the topic of snakes and drops a number of interesting facts about them throughout. There is a rather fascinating scene early in the film with herpetologist Sam Chew recapturing a cobra after it gets loose in his laboratory and endangers a co-worker.

The main problem with the film is that John McCauley’s direction is not the most enervated. The snake attack scenes are generally okay but are far too sparsely interspersed to offer much. The rest of the material is dull stuff with Sam Chew and Elizabeth Chauvet driving around the desert investigating. The script does have the two of them get into a debate about workplace sexual equality with she challenging his fairly chauvinistic views (although not long after that the two of them settle down as an item)

The plot winds up on a military conspiracy that comes out of left field with the explanation that the snake attacks were caused by a military bioweapon that had been dumped in a mine. At the climax, the mine is blown up before the film goes out on the cliche twist ending that suggests the menace is not ended.

Rattlers was the first of only two films directed by John McCauley who has since vanished into obscurity, along with almost everybody involved in the film. McCauley’s one other film was Deadly Intruder (1985) about a killer escaped from an asylum.