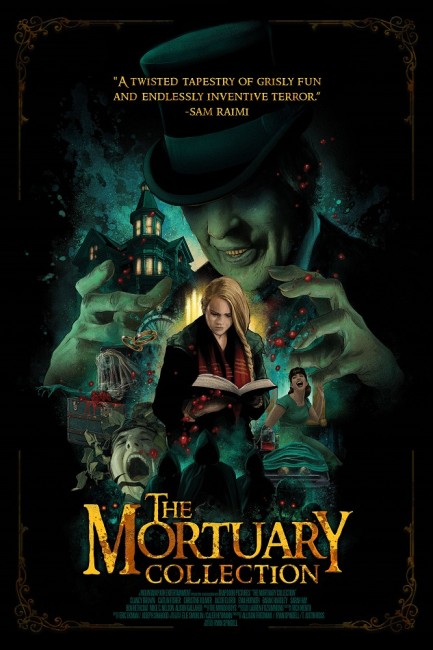 In the town of Raven’s End, Sam responds to a Help Wanted sign at the town mortuary. The mortuary’s owner, the sinister-looking Montgomery Dark, tells her some of the stories of the people he has tended. 1:- At a college party, the beautiful Emma enters the bathroom to go through the contents of the wallets she has pickpocketed from partygoers while making out with them. She then opens the bathroom cabinet only to find a tentacled creature inside. 2:- Jake is the head of a university fraternity and shows new pledges how to give out condoms to girls as a way of working who to pick up. In the course of doing so, Jake meets Sandra and invites her to a party. There he hooks up with her but throws the condom away during sex. In the morning, Jakes finds he is undergoing physical changes and an examination reveals that he is pregnant. 3:- Wendell Owens’ wife Carol slips into a vegetative state. Wendell’s doctor shows him how he could give her a fatal overdose of pills. However, when Wendell does so, things proceed to go wrong. The situation spirals out of control as he attempts to dispose of the body. 4:- A babysitter tends the child in the Kubler family home before discovering that a maniac has escaped from the local asylum and is in the house with her. A violent fight ensues between the two of them.

The horror anthology film has been with us since the silent era. It gained a popularity during the 1960s and became a trademark for Amicus Films in a series of films beginning with Dr Terror’s House of Horrors (1965). It was revived in the 1980s with George Romero’s Creepshow (1982), while recent years have seen the rise of multi-director anthologies such as The ABCs of Death (2012), V/H/S (2012) and others. (For a more detailed overview of the genre see Anthology Films).

Ryan Spindell is a newcomer director who makes his feature-length debut with The Mortuary Collection after making a series of short horror films since the mid-2000s. Some of Spindell’s other shorts circulate around the same town and venues. One of these, the 22-minute The Babysitter Murders (2015), is incorporated to become the fourth episode here.

As with any anthology, the episodes vary a good deal in quality. The Mortuary Collection ranges between the too slight and a sense of appealing dark and mordant humour. The film’s reputation has been pumped up by various commentators but in truth it is a strictly average example of the anthology – weak in some areas, decent in others. The film does boast Clancy Brown, made up like an octogenarian who seems only a few steps away from death’s door, whose great basso voice is wonderfully suited to the role of the narrator.

The first segment – none of the episodes are given names – is set in a bathroom at what would appear to be some campus party as a woman (Christine Kilmer) takes refuge and goes through the wallets she has picked from the pockets of various attendees. She then opens the door of the bathroom cabinet and finds it is a portal leading into darkness from which tentacles emerge and try to drag her in. You commend the segment for its polished mood and Kilmer’s performance but it is never much more than a shaggy dog sting in a tale – the whole episode only runs to eight minutes and seems far too brief.

The second episode in my opinion works the best. It delves into the thorny contemporary issues of campus jock culture and sexual consent. We meet Jacob Elordi who is well-cast as a charismatic fraternity head who uses the promotion of safe sex as a pick-up tool only to then encounter sexily nerdy Ema Horvath. The twist that comes is that after tossing away the condom during sex with her, he wakes in the morning to find himself pregnant. The episode comes with a mordantly grotesque sense of humour that plays out with some amusement.

The third episode features Barak Hardley as a husband who makes the decision to use an overdose of pills to put his comatose wife out of her misery – only for things to start going wrong as she keels over at the dinner table and impales her forehead on the ceramic toy he bought her as a gift. From there, things start to progressively spiral out of control as Barak attempts to move the body out of the apartment only for the elevator to stall, the elderly neighbour to want to call the police and so on. Ryan Spindell’s mordant sense of humour again comes to the fore.

The final segment consists of Spindell’s short film The Babysitter Murders. This also stars Caitlin Fisher from the wraparound segment as a babysitter before finding that an escaped maniac is in the house with her. An energetically violent scuffle ensues before she splatters the intruder’s brains with the tv set. The episode’s sole novelty is to then throw a twist ending on this that reverses expectations.