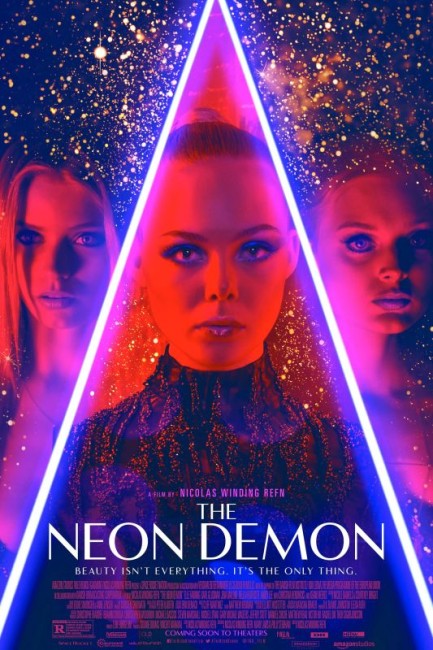 Sixteen year-old Jesse’s parents are dead and she lives on her own in a Los Angeles fleapit motel. She makes a break as a model where she is seen as having an extraordinary naturalness of beauty. She is immediately sought after and begins a meteoric rise through the fashion world. She is befriended by the makeup artist Ruby but the other models are highly jealous. Behind the bitchiness of this world, Jesse senses disturbing forces and is plagued by nightmares.

Danish director Nicolas Winding Refn first gained attention with Pusher (1996), the story of a problem-ridden petty drug dealer, which became a festival and arthouse hit and even underwent an English-language remake. Refn followed this up with two sequels Pusher 2 (2004) and Pusher 3 (2005). He went onto other works such as Bleeder (1999), a grim portrait of a man’s psychological fracturing, and his first English-language film Fear X (2003), a psychological thriller with John Turturro trying to find the reason for his wife’s killing, the brutally tough prison drama film Bronson (2008), the Vikings in America film Valhalla Rising (2009), had a hit with the highly acclaimed, award-winning action film Drive (2011) and then made the critically divided Only God Forgives (2013).

Nicolas Winding Refn is first and foremost a stylist. His films come with an impeccable formal cinematographic composition and use of colour that reminds you of directors like David Lynch and Dario Argento. If it is nothing else, The Neon Demon is a breathtaking absorption in mood and style.

Refn is also a director who regards plots as an irrelevance. Not so much in the way that some of the bone-headed directors in the action and horror field do – or indeed the surreal psycho-thriller narratives of Argento – but more in the way that Terrence Malick’s films, particularly his most recent ones, do where they become more impressionistically layered scenes of mood and internal emotional reflection. Both directors, you get the impression, want us to feel what their protagonists do more so than they are interested in the twists and turnings of plot.

On the other hand, this is not always satisfying in Refn’s hands. The Nicolas Winding Refn films I have enjoyed the most have been ones like Pusher, Drive and especially the brilliant Bronson, which have always anchored his opaque stylistics with a top-drawer performance and/or a plot. Other works like Valhalla Rising and Only God Forgives seem to be allowing Refn too much freedom to indulge and resultingly collapse into beautifully made works that leave audiences at arm’s length as to their happenings.

In recent years, Nicolas Winding Refn has been associated with studio works like The Equalizer (2014), the long-touted remake of Logan’s Run (1976) and, as The Neon Demon goes into release, has announced interest in DC’s Batgirl. All of which leave me absolutely fascinated to see how any of these would emerge under Refn’s hand but equally also thinking that his approach is almost diametrically opposed to the blockbusters that the studios would expect him to deliver.

The Neon Demon is not exactly the same but at least could be said to exist in similar headspace as recent films excoriating Hollywood’s dark and twisted underbelly like Starry Eyes (2014) and David Cronenberg’s Maps to the Stars (2014). Apparently, Refn kept comparing the film to Valley of the Dolls (1967) during shooting – if anything, it could be considered a remake of Valley of the Dolls as directed by Dario Argento. The theme is not a particularly original one – that Hollywood venerates beauty above all else. This is delivered in some particularly biting lines and observations – in particular, Alessandro Nivola’s “There is nothing else except beauty” speech. The main problem here is that Elle Fanning is held up as an ideal of beauty and naturalism that everyone else aches to have. It may seem a case of the Emperor’s New Clothes, or it could just be personal tastes in beauty, but I find Elle Fanning rather plain and just kept wondering what there was about her that everyone else found so special.

Refn shoots the modelling scenes with a hypnotic dangerousness – the opening scene where Karl Glusman shoots portfolio shots with Elle Fanning drenched in blood is set up like an Argento murder set-piece; the scenes with Desmond Harrington getting Elle to strip and then covering her body with gold paint have a glittering erotic fascination and an almost predatory dominance on his part. Oddly, though it is promoted as a horror film, there is nothing in The Neon Demon that feels like it is a horror film up until right near the end. It could almost pass as a regular film about the underbelly of Hollywood or about the modelling profession, albeit a film of glittering and beautiful surfaces filled with troubling and uncertain depths.

It is only in the last fifteen minutes that the film suddenly does a dogleg into demented horror. [PLOT SPOILERS]. Here Elle Fanning thinks that motel manager Keanu Reeves is in her room, forcing a knife down her throat and wakes to hear what sounds like the girl in the neighbouring room (that we have been told is only thirteen) being raped (what is happening and who it involves we never find out). She flees to ask the help of friend Jena Malone only for Jena to sexually come on to her. After being rejected, Jena goes away to the mortuary where she works and does a Kissed (1996) and sexually relieves herself on top of a female corpse. Elle then finds herself stalked through the mansion by Jena and the other two models wielding knives before Jena pushes her into the empty swimming pool where she lies twisted and bleeding. It is not entirely clear what happens to her but we then see Jena covered in blood in a bathtub while the other two have stripped and are washing blood off themselves in the shower. Next Jena is seen watering the garden and an area that may have a body buried in it, while she strips naked in the moonlight and appears to gush a large amount of blood from her womb. Next, we have a modelling shoot where Bella Heathcote falls ill and then coughs up an eyeball before gutting herself with a pair of scissors, as friend Abbey Lee watches on aghast and then with a shrug takes and eats the eyeball herself.

I sit wracking my brain and trying to understand what all of this means. There is the obvious point that beauty is dangerously alluring and that Hollywood/those in the modelling industry/those seeking to be models are either pathologically obsessed with having it or gaining it to the extent that they will devour it. Exactly what the necrophilia scenes and images of Jena Malone gushing blood under the moonlight are all about though is a puzzle, while the abrupt motivations of the characters in these scenes seem bafflingly cryptic at best.

(Nominee for Best Director (Nicolas Winding Refn) and Best Cinematography at this site’s Best of 2016 Awards).