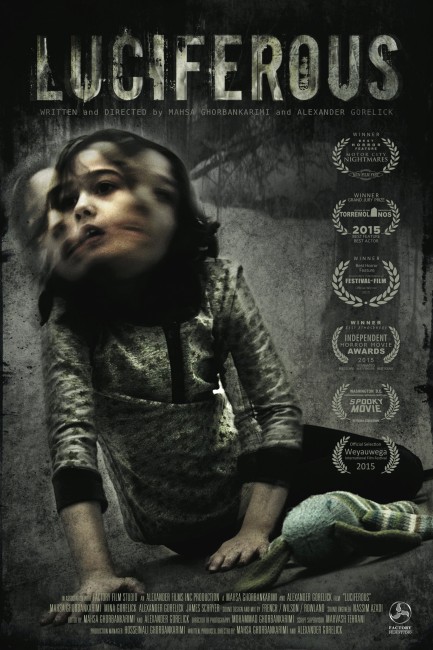 Alex and Mahsa are a married couple living in Toronto with their young daughter Mina. Alex has a fall in the woods and is hospitalised with head trauma. Recovering at home afterwards, Alex begins to experience mood changes, becoming quick to anger. He is also certain that there is a presence in the apartment, which he believes is his dead friend Peter. As Alex’s behaviour becomes more brooding and disturbed, Mahsa tries to persuade him to seek help.

Luciferous was a micro-budgeted film made by and starring husband and wife Mahsa Ghorbankarimi and Alexander Gorelick. Both are immigrants to Canada – Gorelick comes from the former USSR (the region nowadays known as Belarus) and Ghorbankarimi from Iran. Both have worked in the film industry in Toronto for over a decade – Ghorbankarimi in the lighting and compositing department at several Canadian visual effects and animation houses, while Gorelick works in animation and in particular stop-motion animation where he has directed several short films.

I had put off watching Luciferous for some time. The title alone suggested another B movie trying to ride the coattails of Insidious (2010) and offering another copycat title – but one that was being made after every other Insidious copycat had taken all the sinister-sounding adjectives – see also Sinister (2012), Pernicious (2014), Demonic (2015), The Diabolical (2015), Ominous (2015), Ominous (2016) and Malicious (2018) – forcing the filmmakers to make up one of their own.

I was surprised though to find that ‘luciferous’ is an actual word in the English language. However, it does not mean what the filmmakers seem to think it does. You can bet they either took it or made it up thinking that was an adjective that meant “having the quality of Lucifer (ie. The Devil)” whereas it means something completely innocuous in actuality. Collins English Dictionary defines it as meaning “bringing or giving light” and notes that it is an archaic term that has largely fallen out of use since the 18th Century.

Luciferous and the way it has been made held my attention for some way in. The digital camerawork – this is a film that you feel almost should have been Found Footage but it isn’t – has some effect in its calm and understated naturalism. Not to mention that the film has the frequent feel of the two filmmakers blurring a line between fiction and reality – Gorelick and Ghorbankarimi cast themselves as a married couple who share the same names as themselves, while their own daughter Mina plays their daughter Mina and everything has been filmed in their own apartment. When Mahsa tells Mina a story of growing up overseas before she emigrated there and how they enjoyed it when the power and lights went out, you wonder if she is telling a made-up story or something that actually happened to her.

The background of shots loom with all manner of sinister effect – the pet snake devouring a mouse in the little girl’s room, a chair sinisterly rotating of its own accord. There is an unnerving camcorder-shot scene of Mina’s birthday party as a voice comes from offscreen (presumably Gorelick’s) whispering about how he is trying to make himself stop doing bad things.

There are some undeniably uncanny images – the figure of a man in a suit with a white cloth wrapped around his face appearing in the periphery of shots and later seen moving through the apartment, often so subtly you are not sure if he is there. Or an image where Alexander Gorelick abruptly wakes up to find the apartment filled with people with their backs turned to him.

One of the main problems of the film is that nobody on screen is an actor. Mahsa Ghorbankarimi emerges the best and engenders reasonable sympathy. On the other hand, Alexander Gorelick unwisely places himself at the centre of the show. Unfortunately, he has only one method of acting, which to go from zero to histrionic in no time at all where he expostulates every emotive point with his body. With his bony six-foot plus frame, lumbersexual beard and long hair, he already looks alienated before he begins his descent. The main problem – and one that a better actor would have worked with the director to achieve – is that the film establishes no baseline of normalcy and Gorelick just puts the foot to the pedal and revs it up to histrionic straight off the bat. It is a ludicrous kind of over-acting and gets in the way of the sympathy that should be engendered as we watch his descent into madness.

The other thing that kills the film is its ending [PLOT SPOILERS], which opts for a mundane resolution where all of the aspects about Gorelick thinking he is being haunted, possessed and so on are actually being caused by one individual who has been gaslighting them as part of some obscure, never explained game.