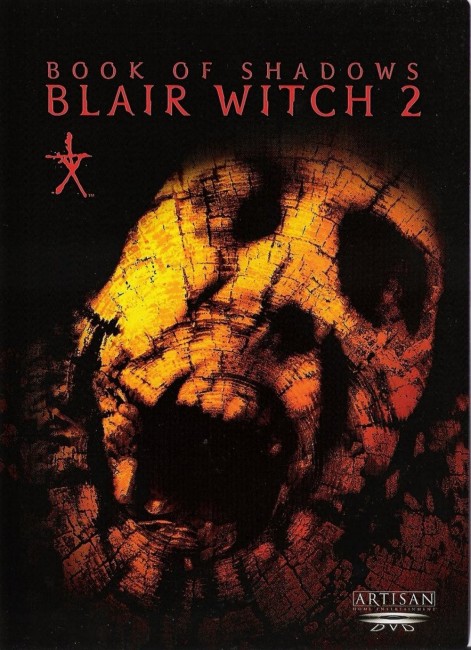 A group of people – two researchers writing a book on the Blair Witch myth, a Wiccan witch and a psychic Goth – join the Blair Witch Hunt, a tour run by Jeffrey, a Burkittsville huckster, of the sites that appeared in the film ‘The Blair Witch Project’. After spending one night at the site in the woods where the people disappeared, the group wake up unable to remember four hours of time and with one of the girls having miscarried – possibly murdered – the baby she was pregnant with. Gathering at the abandoned warehouse where Jeffrey lives, they try to puzzle out what happened but are soon surrounded by increasingly stranger happenings, including the murder of their numbers.

Whether you hated it or not, The Blair Witch Project (1999) was the runaway phenomenon of 1999. It was the first shot-on-video film to become a multiplex hit and inspired a sensation with its no-budget mock-documentary look and claims to authenticity. It was also the first film that became a hit, not through promotion but through Internet word-of-mouth, with people calling it the scariest movie ever made and the like. Of course this then resulted in an anti-hype backlash – “nothing ever happens … it isn’t scary … the camerawork makes you nauseous.”

Hits like The Blair Witch Project are usually only lightning-strikes-once events. In Hollywood terms, such a success invariably mandates a sequel. Realizing that the original’s no-budget, mock-documentary approach was something that could only work once, this time around the creative team have not tried to replicate the style. Book of Shadows: Blair Witch 2 is a film with a reasonable budget, using professional rather than amateur unknown actors; is shot in 35mm rather than video; and has a soundtrack that marshals a substantial line-up of contemporary Goth artists. Of course, this has certain drawbacks – when Book of Shadows tries to conduct the same effect as the first film in giving the characters the same name as the actors it is ruined because it is using actors whose faces are known. The film at least gets around this with an opening credits announcement that tells us that it is a fictionalised account of events.

This time the two directors of the original, Daniel Myrick and Eduardo Sanchez, have stepped back and handed the reigns over to documentary filmmaker Joe Berlinger. What is interesting about the choice of Joe Berlinger as director is that Berlinger was previously known for two documentaries he co-directed about the West Memphis Three, Paradise Lost: The Child Murders at Robin Hood Hills (1996) and Revelations: Paradise Lost 2 (1999), plus the subsequent Paradise Lost 3: Purgatory (2011). These are fascinating documenataries set around a true incident where two Goth teenagers in a small Arkansas town were convicted of the murders of three boys. Berlinger remained cautiously non-committal as to their guilt throughout the documentaries but what eventually emerges from them is a picture where the evidence for the teens’ conviction was slim and their branding as Satanists and child murderers came about more as a result of smalltown superstition over one of them being a Wiccan.

Book of Shadows: Blair Witch 2 was regarded as a big disappointment by almost all fans of the original, which it is, although it is not entirely an uninteresting disappointment. Being made in the era of the post-Scream (1996) horror movie, it is no longer just a sequel but a sequel that readily deconstructs its predecessor. It throws in all sorts of questions about the authenticity of the original, not to mention a few acidic barbs in the direction of Heather Donahue’s acting. This film’s cleverness is to use the real world reaction to the film’s success as part of its fiction. The opening of the film uses clips from Jay Leno, Conan O’Brien, various news shows and MTV, even a Roger Ebert review, as comments on the phenomenon. It then jumps into a series of scenes interviewing the inhabitants of Burkittsville, which offer an amusing series of portraits of the impact of the Blair Witch phenomenon in the real world – the woman that talks about the prohibitive cost of posting the souvenir rocks she markets; the housewife who never goes out to the mailbox without her makeup on in case she is being filmed; the sheriff trying to stop hordes of curiosity seekers. Mixed in with these one later realizes is appearances from the actors, such that one is no longer sure what is documentary and what is faked. We also go behind the scenes in Jeffrey’s warehouse where we see his base of operations for the sales of Blair Witch memorabilia on the Internet – a peculiar mirroring of the real world in that Burkittsville memorabilia was also being offered for sale on the official Blair Witch website.

However, Book of Shadows disappoints in its latter half. Here Joe Berlinger ventures into far more traditional horror movie territory. He certainly creates some effective atmosphere but Book of Shadows has the same problem that too many A Nightmare on Elm Street (1984) clones do – it dissolves into a blurred mess of dream, hallucination and video illusion, one where the filmmaker’s desire to continually pile on effect ends up blurring any distinguishing footholds for its audience to the point that it does not make much sense. There are certainly a good many confusions and loose ends – case in point being that the titular Book of Shadows never makes an appearance anywhere throughout. Further, the promotional campaign made extensive use of lobby stands that detailed the history of the Blair Witch and Burkittsville and introduced the character of Jeffrey with the suggestion that he was somehow connected with the activities of the serial killer as a child. However, none of this has any relevance or even makes an appearance in the finished film – all that appears of Jeffrey’s background is an opening scene and various allusions to his history in a psychiatric hospital but nothing else.

The single most annoying aspect about Book of Shadows is the sudden and abrupt ending. Aside from stopping the film in its tracks and leaving much unresolved, it is an ending where Joe Berlinger contrives to completely reverse the first film. While the first film posed as a documentary that had been left behind and wound the viewing audience into its fiction, the sequel leaves us with the sudden insight that there is an enormous gulf between what we and the characters perceive and between what is recorded on video. In effect, the film taunts the fans of the original and says that video does not tell the truth, a position that far too nakedly exposes the willing fiction that the first film invited its audience to join.

Looking back, one of the great surprises is that the Blair Witch series never became a franchise that was relentlessly milked until audiences tired of it like the Paranormal Activity films were. It may say something about how much audiences reacted negatively to Book of Shadows . Sixteen years later, Adam Wingard took the reins up again with Blair Witch (2016).

Joe Berlinger has subsequently returned to documentary-making. The most famous works he has turned out since has been Metallica: Some Kind of Monster (2004), Whitey: United States of America v. James J. Bulger (2014), Tony Robbins: I Am Not Your Guru (2016) and Intent to Destroy (2017), among others. Berlinger later returned to genre material with the film Extremely Wicked, Shockingly Evil, and Vile (2019) about serial killer Ted Bundy at the same time as he also made the documentary tv series Conversations with a Killer: The Ted Bundy Tapes (2019).