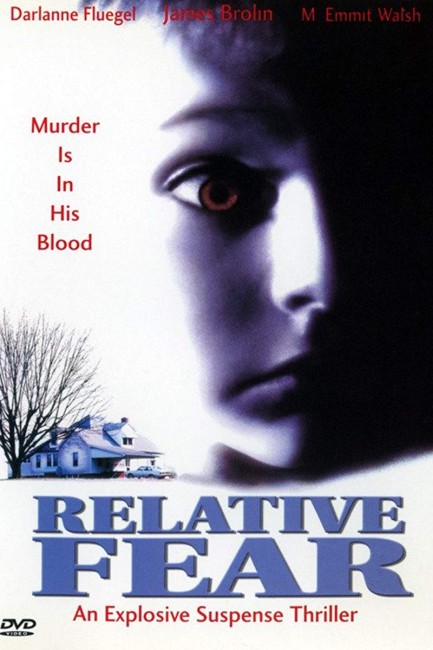 Linda and Peter Pratman’s four year-old son Adam is autistic and nothing they try seems to make him communicate. One by one, people that treat Adam cruelly then start being killed. The only suspect appears to be Adam himself. As Linda digs into the past, she comes to believe that Adam may have been swapped at birth with the child of a woman who is a criminally insane killer.

Relative Fear was one of a spate of evil killer children films that came out around the same time in the mid-1990s and also included the likes of Mikey (1992), The Good Son (1993) and Daddy’s Girl (1996). Relative Fear at least offers the novel variation on the others in that the (possibly) killer child is also autistic.

Relative Fear was made by Canadian director George Mihalka, a regular genre hand who has also made B-budget horror films such as the original My Bloody Valentine (1981), The Blue Man/Eternal Evil (1985), Psychic (1992), Watchtower/Cruel and Unusual (2001) and Race to Mars (tv mini-series, 2007). The script interestingly comes from Kurt Wimmer, later the director of Equilibrium (2002) and Ultraviolet (2006).

Like the rest of George Mihalka’s films, Relative Fear is unexceptional – in fact, it is dreary in most regards. Victims are predictably set-up – you can see the target they have on their forehead from the moment they seem to cross Adam. Most of them have their means of dispatch heavily foreshadowed – M. Emmet Walsh’s reliance on his oxygen mask, Linda Sorenson and the dumbwaiter. Moreover, Mihalka directs with a blandness that wrings any potential suspense out of his set-ups. The lamest scene is when the killer bursts through the door quoting Jack Nicholson’s line from The Shining (1980) – “I’m home, honey” – which falls flat either as a joke or as genre reference.

Like most of the aforementioned killer child films, Relative Fear draws inspiration from the classic in the field The Bad Seed (1956). Relative Fear does so even more than the others in terms of the plot device about the mother believing that her child has been erroneously substituted with the child of a murderer and as a result having inherited a ‘bad seed’. However, the film also sets up some unpleasant associations when it starts to suggest that autism is an inherited genetic malfunction along with psychopathology. Although to the film’s credit, it does offer a surprise twist that reveals the killings as being conducted by someone other than the autistic child.