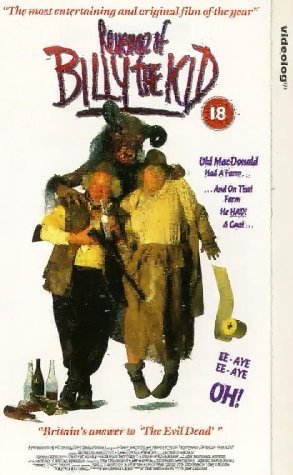 The hayseed MacDonald family maintain a farm on Gomorrah Island. After Gyles, the father of the family, has sex with a goat, it gives birth to something mutated. They go to kill it but the daughter Ronnie insists on taking the creature to raise it herself, naming it Billy. However, Billy soon makes an escape. Growing into an upright-walking goat-human hybrid, it begins to kill everything on the island.

Revenge of Billy the Kid was a British entry into the 1980s splatter comedy fad. It was a debut feature for director Jim Groom and most of those involved who raised the money to make the film independently. This initially proved to not be enough to complete the film. After exhaustive efforts to raise the completion financing through the usual channels failed, the production team did so after placing ads in national magazines. The film was completed and released four years after filming started. Alas, the resulting film ended up being a flop that did little business and was barely even seen on video outside of the UK. (Although it is perfectly possible the reasons for this could be that the title may have led audiences to assume that it was a Western).

When the film went out, the video promotion advertised it as being in the same vein as The Evil Dead (1981) – Jim Groom even includes an Evil Dead poster on the wall of Dean Williamson’s bedroom. The film clearly sees itself in the vein of US-made splatter comedies of the era such as The Evil Dead, Re-Animator (1985) and numerous imitators. (There were several British attempts to venture into this genre during this period – see also I Bought a Vampire Motorcycle (1990) – but these never seemed to hit the stride in the way their American counterparts did).

In terms of the over-the-top 1980s splatter comedy, you could say that Revenge of Billy the Kid aims in the general direction but never particularly gets there. What it seems to lack is the same enthusiastic full tilt gore or black comedy that these others do. What we have could be considered more as a hayseed idiots farce with occasional moments of bloodletting. The goat hybrid creature does turn up but it is a creature effect of variable, frequently unconvincing, effectiveness.

The major thing that drags Revenge of Billy the Kid down is its comedy pitch. The film chooses hayseed yokels as its central characters – if it were an American film, they would have all been played as hillbillies. I have low patience for comedies in which all the characters are played as idiots – the humour with the family here seems to go on and on often without point. Equally, the film also derives a good deal of its comedy from copious jokes about farts, pissing and the muck around the farm. There are times that Groom digs underneath to strike a vein of black humour that suggests the film could have been much more than this but then we return to the idiot humour and this drags the show down.

Jim Groom subsequently went on to make one other horror comedy with Room 36 (2005), as well as the documentary Legend of Hammer Vampires (2008). He has subsequently since made a series of short documentaries for the extras of dvd re-releases of various Hammer films.