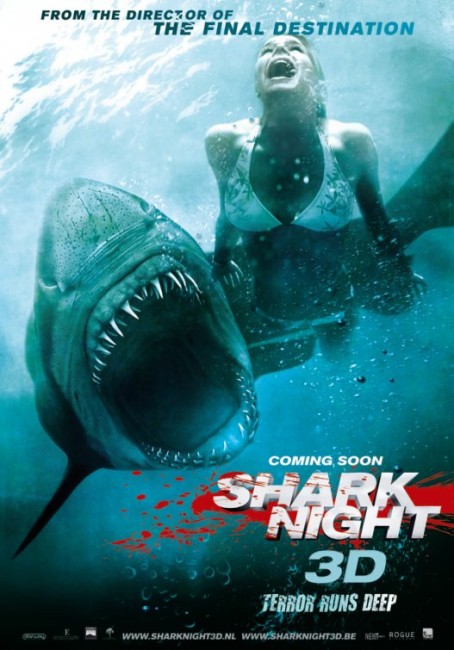 A group of six friends at Tulane University accompany Sara Powski back to her family holiday home on a lake in the Louisiana bayous. While they are waterskiing on the lake, Malik has his arm torn off by a shark. As they try to get him to a hospital, the sharks attack the boat, blowing it up and devouring Malik’s girlfriend Maya. Sara’s former boyfriend Dennis agrees to take two of the group to get medical help but instead throws them to the sharks. As the others become victims or are thrown in to be devoured by Dennis, it is revealed that Dennis and associates have introduced the sharks to the lake in the hopes of making millions by creating snuff shark kill movies.

Shark Night 3D – which proudly bears the 3D above the title even in this version seen flat – is another attempt to make a B movie for 3D. The rapidly becoming tiresome gimmick of 3D became all the in-thing in 2010-1 and was hailed as the one thing that would save plummeting box-office receipts (by jacking up prices), only to be so badly exploited by films that did not need to be seen in 3D – Cats and Dogs: The Revenge of Kitty Galore (2010), Yogi Bear (2010) – or were so badly post-converted into 3D – Clash of the Titans (2010), The Last Airbender (2010) – that audiences were tiring of it by the end of 2011. It is a gimmick that in one’s opinion adds precisely nothing of any substance to a film experience. The most fun to be had among these 3D films is in fact those that choose to see it for the ridiculous gimmick it is and throw absurd things out of the screen at the audience. The remake of Piranha (2010) was the first of these – throwing gore, chomping piranha, nude underwater girl-on-girl ballets and body parts, even severed penises out of the screen at an audience. Another was the recent Sex and Zen 3D: Extreme Ecstasy (2011), which threw erotic couplings, breasts and the like out of the screen.

Shark Night 3D was almost certainly dreamt up not long after Piranha. It has been conceived in a similar attempt to tap exactly the same idea of a tongue-in-cheek cheesy 1980s styled B movie with the added benefit of sharks and severed body parts coming out of the screen at an audience in 3D. The two films even have very similar plots about teens on a vacation at a lake being isolated and picked off by killer fish.

Shark Night 3D received almost universally bad reviews when it came out. To add a contrary voice, I thought it not a bad movie at all, more a case of a reasonably well-budgeted movie trying to be a bad movie in quote marks and frequently planting its tongue in its cheek. Shark Night 3D was made by former stuntman David R. Ellis. Ellis made his directorial debut with Homeward Bound II: Lost in San Francisco (1996) and has gone onto make other works such as Final Destination 2 (2003), Cellular (2004), Asylum (2008) and The Final Destination (2009).

The principal film in David R. Ellis’s oeuvre of note here is Snakes on a Plane (2006), which gained reasonable attention because it was a well-budgeted film that planted tongue entirely in cheek and determined to be a ridiculous B movie. I would argue that Ellis has conceived Shark Night 3D in a similar vein. More than anything, the spate of bad reviews tended to show that audiences took the film more seriously than the filmmakers intended – it is hard to see how reviewers could have missed it, maybe what they needed was what Snakes on a Plane did in signposting that it was all tongue-in-cheek in loud, clear and extremely obvious terms that nobody could miss.

The cast are the typical teen complement of a slasher movie. The characters seem to only be able to be identified apart by their physical characteristics – the nerd, the tattooed chick, the rich girl, the token Black guy. All of the guys come with perfectly sculpted abs and most of the girls spent the bulk of the film changing into or wandering around in bikinis. (This is one of those 00s chaste teen horror films pitched down to the PG-13 crowd so nobody actually gets naked or makes out. It is amusing to contrast the opening scene in Shark Night 3D with the almost identical one in Jaws (1975) – where Jaws featured a girl going skinny-dipping and getting devoured by the shark, Shark Night 3D by contrast features a girl fooling around in the water and then getting devoured not by going skinny-dipping but instead by going back to retrieve the bikini top her boyfriend whips off). This is one of those films where the central characters seem so self-absorbed and the film so determined to flaunt their perfect looks and world of designer privilege at us that we only want to cheer when they start getting devoured. Equally, on the other side of the coin, all the Louisiana locals are caricatured as so ignorant, perverted or filthy that they seem only one step up the evolutionary chain from the sub-human hillbillies in Deliverance (1972).

Most of the cast are actors of no distinction taken directly from the latest teen sensation tv series – aside from Joel David Moore and Joshua Leonard, one of the original The Blair Witch Project (1999) trio, the only familiar name I had heard of among these before was Sara Paxton. Here Paxton spends almost the entire half of the show in a blue bikini, while she has been given a most unbecoming short haircut that makes it look as though her face has been botoxed into a single frozen expression of surprise throughout. Her lack of conviction at doing something as simple as letting us believe she is piloting a jet boat is astonishing.

If Shark Night 3D has stayed down around this level, it would have been the ridiculous film that most reviewers are dismissing it as. On the other hand, it leaps in with a frequent over-the-top absurdity that makes it undeniably amusing. In a sequence that almost rivals the shark blowing up a helicopter scene in Jaws 2 (1978) for entertaining preposterousness, we have a scene where the jet boat is rammed by a shark, causing it to impact with a dock and blow both of them up in a large explosion. The shark attack scenes become increasingly more absurd &ndash; like where a shark leaps out of the water to devour Joel David Moore out of a tree, or where Chris Zylka is snatched off a jetbike by a shark speeding towards him and leaping out of the water.

About the point that Sinqua Walls gets his arm torn off by a shark and then gets up from his bed (still in perfect health) and picks up a spear to wade out into the water and settle the score with the shark in hand to hand combat for the killing of his girlfriend, we can more than clearly see that Shark Night 3D does not want audiences to take it seriously. By the time we get to the climax with the various backwoods hicks revealing a scheme to make snuff shark kill videos of college kids being devoured for internet distribution and Sara Paxton straight-facedly telling her backstory about how her ex Chris Carmack tried to kill her with a rigged scuba kit when she decided to leave him, where she survived and accidentally chewed up his face with the propeller of her boat as she departed, the film has entered into the realm of the enjoyably ridiculous. David R. Ellis even manages to pull off a climax that both hits this sense of the ridiculous at the same time as generating a fair degree of tension in the scenes with Dustin Milligan tied to a chair being dangled over a trapdoor above a shark pool and with Sara Paxton, still not varying in expression, inside a shark cage as a shark tries to force its way inside.