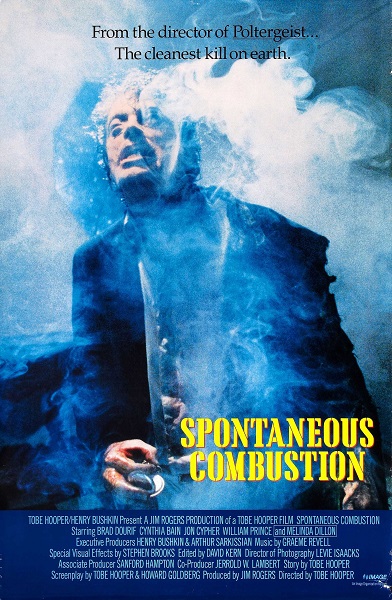 In 1955, Brian and Peggy Bell become test subjects for a drug that will immunize them to the radiation from an H-bomb blast. Not long after, they give birth to a child but the child causes them to spontaneously combust in the delivery room. In the present day, the same child, Sam Kramer, now a university student, discovers a terrible ability to create fires whenever he is emotionally distressed.

In the far distant past, Tobe Hooper made a classic called The Texas Chain Saw Massacre (1974). Some of the less tolerant members of the horror press started accusing Tobe Hooper’s career of being little more than a single note followed by a long downslide. It is not a view that one entirely agrees with as Hooper has made some commendable films – Salem’s Lot (1979), Poltergeist (1982), Lifeforce (1985) and The Texas Chainsaw Massacre 2 (1986), although opinion about the merits of these widely differs. After Spontaneous Combustion (and indeed all the films that Tobe Hooper has made in the 1990s), it becomes increasingly harder to keep defending him. (See below for Tobe Hooper’s other films).

Spontaneous Combustion is an amazingly silly and incoherent film. The plot, which has been tiresomely ripped off from Firestarter (1984), seems to have been randomly slung together, with Tobe Hooper and co-writer Howard Goldberg happy to leave gaping holes and make the rest up as they go along.

Anything that the film might have aspired to is wrecked by Brad Dourif, who gives another of his deranged, tortured performances, most of it yelled out at the top of his voice, which sends the film totally offbeam. Almost as silly is Melinda Dillon’s quaveringly fake Germanic accent in a role of little purpose.