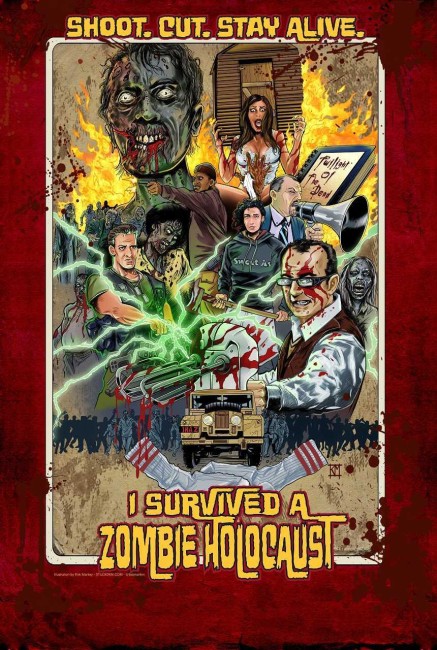 Wesley Pennington gets a job working as a production runner on the set of the zombie film Tonight They Come under the director S.M.P.. Wesley has dreams of being able to sell his own script for a zombie film but soon finds that he is regarded as the lowliest person on the set. He develops an attraction to Susan Ford, the manager of the set canteen. After being asked to drive one ill crew member back to town, Wesley realises that they are facing a real outbreak of zombies. As the film set is rapidly overrun by the zombies, Wesley tries to rescue Susan and make it to freedom with a handful of others.

I Survived a Zombie Holocaust is one of the numerous zombie comedies that has emerged from the late 2000s. The revival of the genre that came in the mid-2000s with hits like Resident Evil (2002), 28 Days Later (2002), Dawn of the Dead (2004) and Shaun of the Dead (2004) was jumped aboard by a shuffling horde of imitators that soon revealed that the zombie film had a fairly limited number of plots available to it.

The New Zealand zombie film was first conducted (sort of) with David Blyth’s Death Warmed Up (1984) and received its full flowering with Peter Jackson’s Braindead/Deadalive (1992), which could be considered the forerunner of the modern zombie comedy. I Survived a Zombie Holocaust is the first NZ film made during the era of the modern zombie film, although it could very much be a successor to Braindead – you get the impression that director Guy Pigden has taken much influence from Jackson.

The idea of the slasher film that takes place on the horror movie set was in danger of taking off for a time a few years ago with a handful of low-budget films like Lights Camera Dead (2007), Bleading Lady/Star Vehicle (2010), Fright Flick (2011) and Silent But Deadly (2011) but I Survived a Zombie Holocaust is the first zombie film to take such an approach. The zombie film on a film set was subsequently far more wittily conducted (sort of) in the hilarious Japanese One Cut of the Dead (2017), while The Snarling (2018) offered a werewolf film that takes place on a zombie film set.

The opening film-within-the-film scenes with the impossibly handsomer-than-life Mike Edward charging in with heroic certainty, lantern jaw and a series of excruciating Schwarzenegger-esque quips – “Fork you,” as he despatches a zombie with a fork and “Shut your trap” as he despatches another with a bear trap – sets in as a promising parody of the zombie genre.

Thereafter, the film plays out with a fairly simple premise but for the fact that it takes place on a movie set. Much of the film’s humour comes in broad caricatures – each of the characters have a single distinctive characteristic and this is simply repeated whenever they come on. Harley Neville is played as such a nebbish that he belongs more in a Woody Allen film – all that is missing is the series of self-deprecating one-liners. The entire film becomes an extended catalogue of humiliations that are heaped upon Harley with everybody on the set delighting in berating him, calling him an idiot and ordering him about.

There is the odd amusing line – an infected Reanin Johannik stumbles onto set with a usual zombie growl and slaver to be greeted by director Andrew Laing “Is that her American accent?” followed by her vomiting blood “Oh God, she’s purging on set.” Elsewhere, Mike Edward pushes through a horde of zombies pawing at him to get to his trailer with a dismissive “Fans!” By about the halfway point though, all of this starts to slide into fairly predictable comedy.

Things however pick up when we arrive at the zombie outbreak in the second half of the film. It is here that Guy Pigden starts to draw on what Peter Jackson laid down in Braindead. The film gets the balance of broad humour and horror comedy mostly right. The level of gore is high and the makeup effects not too bad with even a number of these that are undeniably amusing – Harley Neville despatching a zombie with an eggbeater at one point. Jackson still has the advantage in terms of sheer dementia but this emerges as an enjoyable copy.