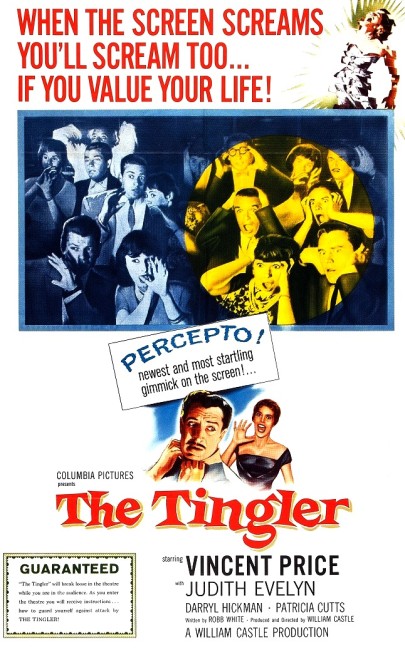 Ollie Higgins visits coroner Dr Warren Chapin to claim the body of his wife’s brother, who has been executed by electric chair. Chapin notes how the body died in a state of great fear and the spine has been snapped by an incredible force. He believes that this was caused by a living creature that he has named The Tingler. Chapin believes that The Tingler is a parasite that lives inside every human’s body and feeds on fear but can be destroyed by screaming. Chapin wants to capture a living Tingler. He locks himself in his lab and takes some LSD but is unable to prevent himself from screaming and thus killing his Tingler. Chapin then decides to use Higgins’s deaf-mute wife Martha as a subject in an experiment. He wants to scare her – because she cannot scream, she will be unable destroy her Tingler, meaning that he will be able to capture it. He sets about scaring Martha with various staged phenomena but instead this kills her. Chapin succeeds in extracting a live Tingler from her dead body. Meanwhile, Chapin and his unfaithful wife Isabel have been blackmailing one another. She now seeks to dispose of him by unleashing the captured Tingler.

William Castle (1914-77) was one of the great genre producers and directors of the 1950s/60s. Castle was not a terribly great filmmaker but what he specialised in was promotional gimmicks. With Macabre (1958), he issued an insurance policy with Lloyd’s of London against audience members dying of fright; in House on Haunted Hill (1959), cinemas were equipped with a skeleton that was winched across the theatre at an appropriate point; in 13 Ghosts (1960), audiences were given ghost viewers – glasses with pieces of coloured cellophane over them that allowed them to see the ghosts; in Homicidal (1961), there was a Fright Break where the faint of heart could leave the theatre; while Mr. Sardonicus (1961) had the opportunity for audiences to vote on an ending where the title character would either be saved or doomed. (See bottom of the page for a full listing of William Castle’s genre films).

The Tingler was William Castle’s greatest moment of triumph (unless you count Rosemary’s Baby (1968) – but he was only producer on that). The Tingler has become a cult classic. Watching it you can see why – it has everything including an outrageously entertaining premise, Vincent Price, William Castle at the height of his gimmick-based ingenuity, wonderfully torrid scenes of marital in-battling between Price and his calculating tramp of a wife Patricia Cutts. We even LSD trips – The Tingler was the first film to ever depict an acid trip (Robb White recounts how he tried some LSD on the advice of Aldous Huxley, back at a time when it was still a legal drug, and then incorporated it into the film). It is a wonderful little B film that lives up to its cult reputation in every way.

The concept of The Tingler and its being defeated by the “release of fear tensions” (ie. screaming) is positively ingenious (although the idea that something the size of what the Tingler is finally revealed to be could hide inside the human body undetected is preposterous). Frequent Castle collaborator Robb White turns in a tautly effective screenplay – there is a fine twist that reveals Philip Coolidge as having deliberately murdered his wife. Although the final seemingly tacked-on twist ending with her returning to life and coming after him makes no sense.

As a director, William Castle seemed driven by the crude sensationalistic approach of a P.T. Barnum more than anything. His actual style as a director was frequently flat and pedestrian. That said, some of the time here Castle’s brute force shock theatrics could prove effective. The scenes trying to scare deaf-mute Judith Evelyn – where she is pursued by a man in a mask waving a knife, with hatchets being thrown and death certificates placed on bathroom mirrors – have a mechanical pedestrianness. However, these are transcended by one wonderful scene where the water in a bath turns blood red (in a film that is otherwise shot in black-and-white) as a hand reaches up out of it.

Where William Castle always succeeded was when it came to his gimmicks – not through any necessary imagination but more through his brazen hucksterism. With The Tingler, he was at the height of ingenuity after which he never achieved the same again. Castle’s inspired scheme here was the wiring up of theatres with electroshock buzzers beneath the seats, which would zap people at selected intervals (although the extent to which this was done and the number of theatres that were wired up was not as widespread as B movie myth would have it).

There is a marvellous prologue where William Castle himself appears to introduce the film: “At any time you are conscious of a tingling sensation, you may obtain immediate relief by screaming. Don’t be embarrassed about opening your mouth and letting rip with all you’ve got.” The film ends with another blank screen and Castle’s voice: “Ladies and gentlemen, just a word of warning, if any of you are not convinced you have a Tingler of your own, the next time you are in the dark, don’t scream.”

The finest moment in the film occurs near the end where Castle has The Tingler get loose in a silent movie theatre. There is that wonderful moment where the screen goes completely blank (this was probably the point where the electroshock buzzers were turned on and audiences jolted out of their wits). Castle’s voice again appears to assure audiences that there is no cause for alarm. A couple of moments later The Tingler is seen in silhouette entering the projection booth, whereupon Castle invokes the audience to scream for all they are worth and stun The Tingler. It is an absolutely glorious moment where both the film and the meta-filmic combine – the invocation is as much to the audience that is watching the film and being jolted as it is anything to do with what is going on on screen.

In recent years, there have been a number of remakes of William Castle films and a remake of The Tingler was at one point announced, although has yet to emerge.

William Castle’s other films of genre note as producer-director are:– as director of Crime Doctor’s Manhunt (1945), the sixth in a series of Columbia crime thrillers, of which Castle directed several, featuring a forensicologist against a split-personalitied killer; the psycho-thriller Macabre (1958); House on Haunted Hill (1959); the haunted house film 13 Ghosts (1960); the psycho-thriller Homicidal (1961); Mr. Sardonicus ((1961) about a man with his face caught in a grotesque frozen smile; the juvenile comedy Zotz! (1962) about a magical coin; the remake of The Old Dark House (1963) for Hammer; the Grand Guignol psycho-thriller Strait-Jacket (1964) with Joan Crawford; The Night Walker (1965), a psycho-thriller about a dream lover; the prank phonecall psycho-thriller I Saw What You Did (1965); the psycho-thriller Let’s Kill Uncle (1965); the ghost comedy The Spirit is Willing (1967); the reality-bending sf film Project X (1968); as producer of the classic occult film Rosemary’s Baby (1968); as producer of the anthology series Ghost Story (1972-3); Shanks (1974) with Marcel Marceau as a puppeteer who can resurrect the dead; and as producer of the firestarting insect film Bug! (1975).