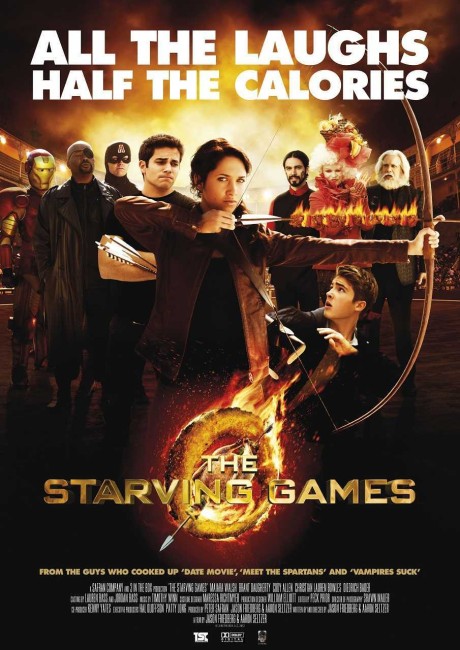 In the totalitarian future, President Snowballs has devised The Starving Games in which youths chosen from the various districts are pitted against one another to fight to the death, which is televised in order to placate the masses. In District 12, Kantmiss Evershot volunteers to protect her younger sister Petunia from being selected, while Peter Malarkey is also chosen as the male contestant. In the arena, they fight against competitors from the other districts before it is discovered that the idea of a romance between the two of them could be a ratings hit.

Rather than predecessors in this vein like Mel Brooks and the Zucker Brothers who have affection for the targets of their parody, Friedberg and Seltzer seem like kids who were raised on mainlined watchings of MTV and celebrity gossip shows who have developed a particular brand of ADD where they are only obsessed with The Now and mocking and sneering at the hits and celebrities of the last five minutes and forget anything six months after it came out. They seem like the alarming number of people who frequent celeb sites like Gawker whose sole purpose in life seems to be making catty, bitchy putdowns of the famous. All of their films are mind-numbingly stupid – they only recreate scenes from other films and play out moron denominator gags around them. Almost all of their films as directors have ended up on this site’s Worst of the Year lists.

With their previous film Vampires Suck doing little business, one held out hopes that people had lost interest in bankrolling Friedberg and Seltzer brand of idiocy. While most of their other directorial efforts had come out one per year, even two films per year in the case of Meet the Spartans and Disaster Movie, it has been three years in between Vampires Suck and The Starving Games. The Starving Games floated around for a time under the title of The Biggest Movie of All Time 3D, which was intended as a parody of Avatar (2009). By 2013, with Avatar four years old – a century ago in Friedberg-Seltzer ADD think – they now take up spoofing the contemporary teen hit of The Hunger Games (2012) – indeed, The Starving Games was released two weeks before the Hunger Games sequel The Hunger Games: Catching Fire (2013). (The Avatar parody is still there but relegated to only a single scene). We also saw another Hunger Games parody not long after this with The Hungover Games (2014).

As with Vampires Suck and its take on the Twilight series, Friedberg and Seltzer seem to be paying a little more respect to plot – although what this means in actuality is that they adhere more closely to the plot laid down in their primary target and are less random and all over the place. The Starving Games follows The Hunger Games fairly closely on all major points (as though Friedberg and Seltzer were too unimaginative to do anything else). There is the odd spoof fired in the direction of The Hunger Games – Effie’s headdress is a bowl of fruit that is frequently toppling over; President Snowballs admits that he got the idea to hold The Hunger Games from films like The Running Man (1987) and Battle Royale (2000).

Mostly the film heads for a series of obvious gags – when Maiara Walsh turns up in Katniss’s flaming dress, it really is on fire; when Peeta/Peter admits a secret crush for one of the fellow contestants, it turns out to be one of the other guys. The film’s more amusing idea is to treat The Hunger Games like a US sports tv show with commentators, halftime breaks and replay highlights spoofing the style of these shows. The most fun to be had is Friedberg-Seltzer regular Diedrich Bader who plays a parody of Donald Sutherland with booming fake gravitas.

There are a various spoofs of other films of recent as well – the arrow that Maiara Walsh shoots in the opening scene hits a lookalike of James Franco’s Oz arriving by balloon from Oz: The Great and Powerful (2013); the Harry Potter characters turn up in District 12 and are banished for being in the wrong franchise; the characters from The Hobbit: An Unexpected Journey (2012) turn up in the cave where Maiara Walsh and Cody Allen Christian take refuge; the climax features parody lookalikes of the teams from The Expendables (2010) and The Avengers (2012) entering the ring and being obliterated. There are various jibes thrown in the direction of celebrities such as Honey Boo Boo, Psy, Oprah Winfrey, Taylor Swift and Mel Gibson and phenomena like Angry Birds.

What should at least be said is that Friedberg and Seltzer seem to be improving. Somewhat should be the codifier. Their films no longer seem as moronic and crass, there is even something that vaguely heads in the direction of creating a funny gag – I found myself mildly amused by one scene where a Taylor Swift lookalike turns up and serenades a dying contestant. It still makes for a film that is moronic, stupid and obvious, just being quieter and less crass about it.