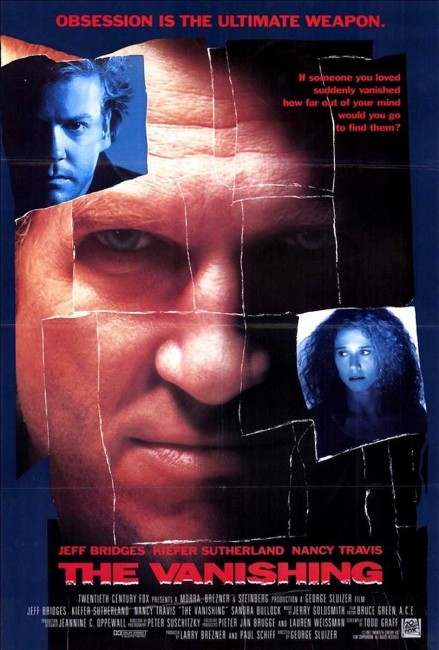 While on vacation with his girlfriend Diane Sawyer, Jeff Harriman stops at a gas station where Diane goes in to buy a packet of cigarettes. However, she fails to return. Searches by Jeff and the police fail to ever find her. Three years later, Jeff is still obsessed with Diane’s disappearance. His involvement with waitress Rita Baker seems to cause his obsession to drop off – although, Rita finds that he is only hiding it from her. Following an appeal on television, Jeff is then contacted by chemistry teacher Barney Cousins who offers to show him what happened to Diane.

The Dutch film The Vanishing (1988) was a grippingly good psycho-thriller that left audiences buzzing over its obsessively layered mystery and jolt twist ending as they left theatres. The reasoning that has gone on behind this remake is depressing. Like Three Men and a Baby (1987), Look Who’s Talking (1989), Point of No Return (1993), True Lies (1994), Diabolique (1996), Just Visiting (2001), Vanilla Sky (2001), Funny Games U.S. (2007), The Girl with the Dragon Tattoo (2011) and Contraband (2012), not to mention the fad that grew after the success of The Ring (2002) – all foreign-language films that have been remade in English – the sole reasons for its making seem to be the assumption that American audiences are unable to understand subtitles. The first Vanishing did what it did so well that there is no need for this version and the attempts to make this film more “commercially accessible” only result in an appalling diluting of eveything that made the original memorable in the first place.

In the screenplay from actor Todd Graff, the original film’s multi-layered story – which was told via a complex series of crosscuts and flashbacks that eventually came together as an ingenious jigsaw puzzle – has been thrown out for a linear plotline. The new film also lacks the directorial obsessiveness of the original – the way the original, like its lead character, returned to the same site over and over again from different angles and points of view. At most, this version offers up a single pallid flashback. The new plot holds no surprises – excepting what happened to Sandra Bullock’s missing girlfriend.

The single most asinine thing about the remake is the new ending. What made the original so shocking was its ending where the Jeff Bridges character (played by Bernard-Pierre Donnadieu in the original) tells the Kiefer Sutherland character (Gene Bervoets in the original) that he could only find out what happened to his girlfriend if he went through what she did, whereupon Bervoets/Sutherland’s takes the drugged coffee and wakes up in the darkness to find that he has been buried alive, at which point the film fades out. Director George Sluizer, in statedly feeling that American audiences were unable to handle downbeat endings, sees fit to now add a completely different ending wherein the Sutherland/Bervoets character is saved from his entombment. It is an ending that appallingly misunderstands everything that made the first film’s conclusion so shocking.

Almost as bad is the plot trail that the remake has to take to get to its new ending, which depends on such ludicrous contrivations as the missing girlfriend’s name just happening to anagrammatically rearrange into ‘Are Vanished’ [it doesn’t, despite what the film says] and Nancy Travis, in one extraordinary leap, being able to guess that such is a computer password; a telephone answering machine that can, after being left forgotten on record, spontaneously turn to play; a mentally deranged woman with perfect recall regarding licence numbers; a ludicrously improbable congame pulled on the Motor Vehicle Registration Department in order to obtain vital information; such convenient devices as chloroformed telephone receivers and Jeff Bridges’ underage daughter telling Nancy Travis she is off to conduct a secret love-affair; and a laughable finale where Jeff Bridges is dispatched by being impaled in the head with a flimsy handsaw blade.

The remake introduces a new character in Nancy Travis. (The character of Bervoets/Sutherland’s new girlfriend was present in the original but little more than wallpaper). However, this is something that works almost too well, as Nancy Travis’s strong-headed and sympathetic playing makes her the most spirited character in the film. The character works well in showing up Kiefer Sutherland’s obsessiveness – these being some of the few scenes where this version generates some feeling. Nancy Travis tends to even overshadow Jeff Bridges’ psycho – he has some good moments but behind Bridges’ narrowed eyes the character seems impenetrable, and moreover, he lacks the comic undertow that made Bernard-Pierre Donnadieu’s character conversely so threatening in the original.

It is not uncommon to see a remake so disastrously misunderstand what made an original work so effectively. That George Sluizer, the director of the original (who also co-wrote the original’s screenplay), conspired in this version seems a failure that is unforgiveable.