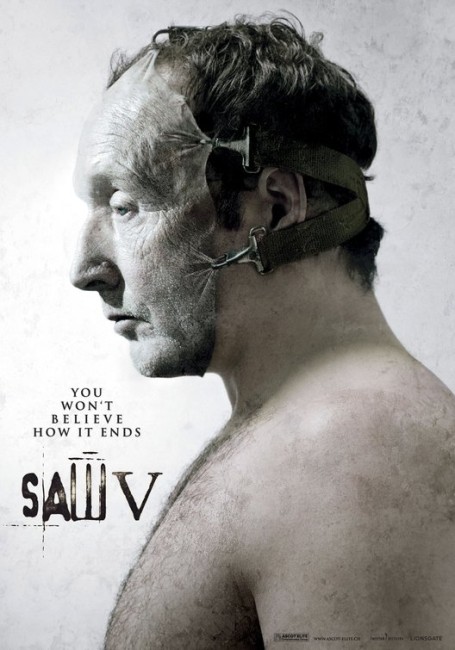 Police detective Mark Hoffman is declared a hero and promoted for having rescued a child from Jigsaw’s traps. Meanwhile, FBI Agent Peter Strahm survives a Jigsaw trap. Placed on medical leave, he begins investigating. After realising that Hoffman has been on every single Jigsaw case, Strahm suspects that he might be a Jigsaw associate. Hoffman remembers back to when he created a Jigsaw-type trap so that he could kill the man who murdered his sister and leave the killing blamed on Jigsaw. He was then discovered and abducted by Jigsaw who offered him the opportunity to become an apprentice. Meanwhile, a group of five people have been placed inside a houseful of Jigsaw traps and have to make their way through these to get to freedom.

One positive aspect about the Saw series, as compared to other horror franchises such as the Friday the 13th or A Nightmare on Elm Street series, is that a great deal of attention is paid to plotting continuity between the films. Both the Friday the 13th and A Nightmare on Elm Street films resurrect their nemeses with a minimum of fuss and get them about their usual business as quickly as possible, either ignoring or sweeping under the carpet the continuity holes or the improbabilities about the means of doing so.

The Saw series by contrast keeps expanding the original saga out and revealing all manner of alternate plots and co-conspirators hidden inside the margins – the latter sequels almost approach something like Back to the Future Part II (1989), which created another entire storyline hidden around the edges of the events of Back to the Future (1985). Were the Saw series a Friday the 13th/Elm Street film, John Kramer would surely have been resurrected from the dead by now.

The downside of this is that anybody who has not followed the continuity of the Saw series exceedingly closely is almost completely lost in the labyrinthine plot taking place. I have seen all of the other Saw films and have a reasonably good memory for details but must admit to being lost trying to follow things that were happening and how they slotted into the events of the other films. It is never clear, for instance, which scenes are flashbacks and which are taking place in the present. It becomes increasingly apparent that the plotline we see in Saw V is not taking place in a linear line and that some of the events shown may have even preceded the events of the other films. Saw fansites are abuzz with debate over how the timelines of the various films slot together.

The other point that one would make is that, unlike the other films in the series, Saw V has clearly been constructed open ended with several plot strands left uncompleted for the subsequent Saw VI (2009). This film ends effectively, albeit decidedly abruptly, with Scott Patterson caught in a trap by Costas Mandylor. Mark Rolston’s secondary FBI agent and his investigation, which we are given the impression is being manipulated by Costas Mandylor for reasons unknown, is left unresolved just as he enters Jigsaw’s lair. There is also a B-plot running through the film of a group of five people placed in a house of traps a la Saw II, but the fate of the last two survivors is left unresolved. There is also a minor subplot about John Kramer’s wife Jill (Betsy Russell) receiving a box as bequeathment in her husband’s will but this is opened without us finding out what the contents are. All that seems missing as the end credits roll is a big notice saying ‘To Be Continued’.

Darren Lynn Bousman, who directed all the other sequels, has departed the series to make Repo: The Genetic Opera (2008) and has been replaced by David Hackl, who served as production designer on all the other Saw sequels up to this point and second unit director on the previous two. The absence of Darren Lynn Bousman does result in a Saw film that is somewhat tamer than the other sequels. There are only a handful of traps – one with Scott Patterson trapped with his head in a glass box that is filling with water and forced to perform a tracheotomy on himself in order to breathe; the opening sequence where Joris Jarsky is placed under a pendulum device (a sequence that is stolen from Edgar Allan Poe); and various head severings, hands in buzzsaws and people electrocuted during the scenes with the five in the house. As opposed to Bousman who determined to linger on every gory detail and spare us nothing, David Hackl’s camera even shies away from showing things at times.

The other thing that the series now misses under David Hackl is Darren Lynn Bousman’s sickly green subterranean lighting schemes, which have been replaced by a much blander lighting scheme, something that has a tendency to make Saw V look a good deal cheaper.

Director David Hackl subsequently returned to the horror genre with the wilderness survival film Into the Grizzly Maze (2015) and the non-genre Life on the Line (2015).