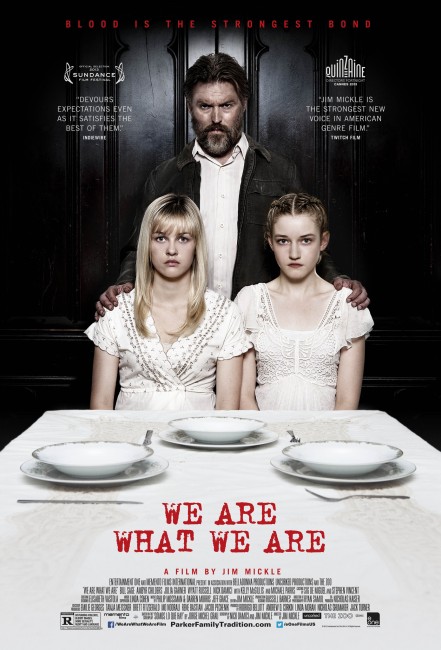 In a small nowhere town, Emma Parker collapses and dies while returning from shopping in the township. As her family adjust to this news, the oldest daughter, the teenage Iris, is told by their father that she will now be responsible for providing for them. At the same time, the town doctor Doc Barrow finds a fragment of human bone while walking in the nearby woods. He investigates on his own and ties this to an inordinate number of people that have gone missing in the area. With her assumption of household duties, Iris discovers that it is part of the family tradition, one that extended back to pioneer days, to kill the missing they have abducted and cook their flesh for the rest of the family.

We Are What We Are (2010) was a film from Mexican director Jorge Michel Grau that received quite reasonable international word of mouth. It concerned the activities of a family of cannibals as the mantle of responsibility is passed to the eldest son following the father’s death and follows their stumbling attempts to hunt. What made the original such an unusual film was Grau’s refusal to give an explanation as to what was going on, leaving only cryptic hints and suggestions. While We Are What We Are enjoyed modest success, it is not exactly a film that cries out for an English-language remake. Nevertheless, that is what it gets here.

The remake comes from Jim Mickle who is shaping up as a promising name. Mickle had first appeared with Mulberry Street (2006) concerning a deadly infection, which received some good festival buzz, and then made the even better post-holocaust vampire film Stake Land (2010) under the aegis of Breaking Glass Pictures. Subsequent to We Are What We Are, Mickle went onto make the adaptation of the Joe R. Lansdale thriller Cold in July (2014), the time travel film In the Shadow of the Moon (2019) and to create the tv series Sweet Tooth (2021- ) about post-apocalyptic animal hybrids.

While the remake retains a general faithfulness to the basics of the original, there are a number of noticeable changes made. For one, Mickle has swapped the sexes of the principals – in the opening scenes, it is the mother rather than the father of the family that dies; while it becomes the eldest daughter rather than the son who must accept the mantle of responsibility in killing to provide.

Mickle also eliminates the cryptic nature of the original and gives an explanation – the family are suffering from Kuru Disease, an existing condition found among the tribes of New Guinea who have eaten human flesh. The pursuing detective is replaced by Michael Parks as the town doctor who starts to investigate after discovering the bones of the bodies they have buried on their property as these are washed up in the aftermath of a storm.

The remake certainly does not set out to replicate the Mexican film scene by scene. On the other hand, while more clear about what is going on, it is no less frustrating a film than the original. While the Mexican film was urban set, this is rural and so Jim Mickle gives it a very laidback, sedate pace as he takes in the ordinary, uneventful life of the family.

Having seen the Mexican film, we are in the frustrating position of knowing what is going to happen – and having to wait a long time before anything starts to occur. Furthermore, there are none of the scenes here with the children having to learn to go out and hunt so the drama about the cannibalism is even more muted.

Nevertheless, when the remake finally arrives at actually being a horror film, Jim Mickle does deliver some modest effect – the abrupt jolt where a make out session ends with one party getting a shovel in the head and [PLOT SPOILERS] especially the grimly effective ending where the children turn on the father.