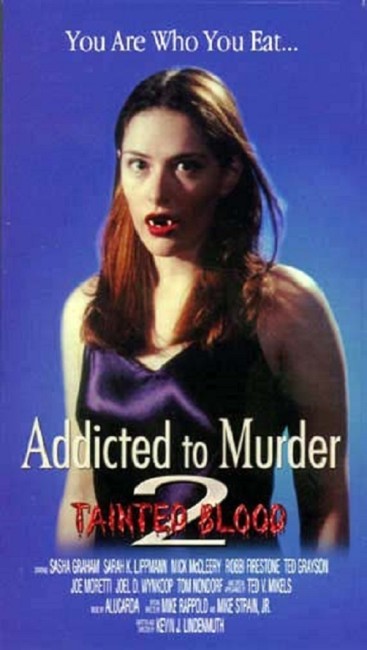 aka Addicted to Murder 2

In present day New York City, Tricia, a newly born vampire, struggles with her condition, attracting victims through ads placed in the personals column. However, her bumbling attempts draw the attention of her sire, the long-lived Angie, who sends Jonathan to stop her.

For a time, Kevin J. Lindenmuth was one of the most interesting directors working within the usually creatively impoverished arena of the no-budget, shot-on-video independent horror film. Lindenmuth has made a number of films since his debut with Vampires and Other Stereotypes (1994), most of which are anthologies where he collaborates with other filmmakers. He personally sells the films via mail order and his own website (www.lindenmuth.com). Addicted to Murder: Tainted Blood is a sequel to Addicted to Murder (1995), Kevin Lindenmuth’s second film, a conceptually ambitious effort that dealt its vampirism with considerably fascinating ambiguity. Lindenmuth’s regular actors Mick McCleery and Sasha Graham repeat their roles from the first film.

Most no-budget, shot-on-video films are cheap pastiches of other works. Indeed, one suspects some filmmakers end up in the no-budget arena because they creatively lack an ability to do anything more than copy other works. The tide of cheap clones of Friday the 13th (1980), The Terminator (1984) and Hellraiser (1987) would make a very large trash pile somewhere. The vampire film is another overused theme in this arena.

Addicted to Murder: Tainted Blood has its share of cheap effects but Kevin Lindenmuth’s interest is in telling a character driven story – the film is far more of a character ensemble piece than it is ever a shock/effects film. Some of the characters strands seem unconnected, although all tie together nicely by the end and overall the characters grip with some originality. Most original of these is the novice vampire played by Sarah K. Lippmann. This is a vampire unlike any you have seen before – the vampire as modern women querulously venturing into the singles scene. There are some very funny scenes with her dates running out of the house going “She bit me,” or the expressions on her face as she contemplates biting her best friend.

Kevin J. Lindenmuth is a director who improves with each film. From Vampires and Other Stereotypes to Tainted Blood, he has moved from a director of promise to one with an extraordinary grasp of mise en scene. Addicted to Murder: Tainted Blood is filled with clever scenes that Lindenmuth sets up, leading his audience to expect one thing and then deliberately overturning expectation.

In the opening minutes here, a stalker enters a house after a woman and terrorizes her, before expectation is reversed and it becomes apparent that he is not a stalker/rapist but that he believes she is a vampire and wants her to make him one. It is a scene that hovers between whether to believe him or not before the tables are eventually turned and he becomes the victim. For a time, we perceive Sarah K. Lippmann as a lonely single woman going out on dates and trying to find a worthwhile man but then this assumption is overturned and it becomes wittily apparent that she is a vampire using the personals column as a means of soliciting victims.

There are marvellous little vignettes and throwaways dotted throughout the film – like the scene where Lindenmuth regular Mick McCleery picks up a woman hitch-hiker who tells him all about her luck charm. A few minutes later we see him closing a dumpster and holding the charm “Look’s like you ran out of it.” It is a scene of great subtlety that never spells anything out for the audience but waits for them to decipher the clues. There is another nifty scene where a vampire executioner comes upon a misbehaving vampire and pulls out a pair of pliers, holding them up to his mouth: “You know what happens when a vampire can’t feed for several months?”

Addicted to Murder: Tainted Blood is a fine little film, made with considerably more imagination than any bigger-budgeted rivals. If Kevin J. Lindenmuth were given the budget of a reasonable or even B Hollywood movie, one suspects the results would prove quite remarkable.