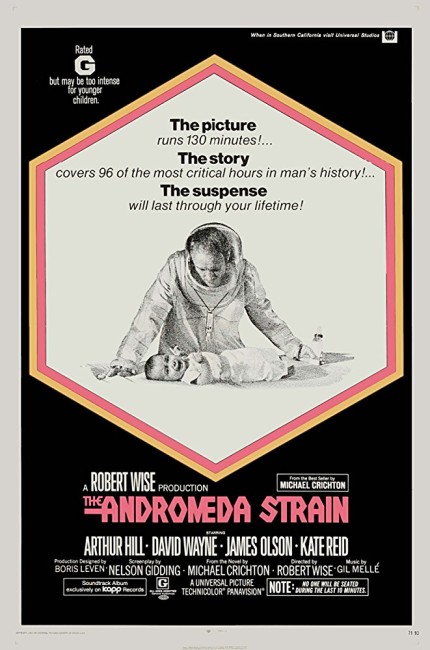 The US military track the returned Scoop 7 satellite to where it has come down in the small town of Piedmont, New Mexico, only to find that it has returned with an extra-terrestrial virus that has wiped out the town’s entire population with the exception of the town drunk and a baby. A group of doctors and scientists are hurriedly assembled at a top-secret containment facility in the Nevada desert that is safeguarded against infection to the maximum degree. They must work around the clock find a way of stopping the menace before it spreads.

The Andromeda Strain is where Michael Crichton’s name became known. Crichton graduated from Harvard Medical School in 1964, became a doctor and then published the novel version of The Andromeda Strain (1969), which duly became a best-seller and was then adapted into this film. .(Although he had earlier published five crime novels under the pseudonym John Lange).

The film of The Andromeda Strain was a big hit – one of the biggest science-fiction hits in the pre-Star Wars (1977) blockbuster era. Michael Crichton was then able to ride a considerable wave of success in the 1970s on the basis of The Andromeda Strain. He published a number of other novels and cinemas saw an adaptation made of his The Terminal Man (1974), before he made his directorial debut with the tv movie Pursuit (1972) and then went on to direct the theatrical release of the highly successful Westworld (1973) and several subsequent films (see below).

The Andromeda Strain came out at the peak of a wave of science-fiction films that began with 2001: A Space Odyssey (1968). 2001 came at the height of the Space Age, a time where it seemed that the whole of science-fiction’s yearning to reach outward to the stars was about to be achieved by the Moon Landing. Contrarily though, instead of celebrating this triumph, 2001 and the host of films that followed and took up its themes throughout the 1970s – the likes of Planet of the Apes (1968) and sequels, THX 1138 (1971), Silent Running (1972), Zardoz (1974), Phase IV (1974), The Man Who Fell to Earth (1976) and all of Michael Crichton’s work – turned away and saw the future and outer space as inhospitable, while becoming overwhelmed by the pessimistic belief that the world was doomed by self-destruction and overpopulation, even that the animal kingdom was rebelling against us. The problem was that at the time of the Moon Landing, which had been a vision of Camelot and John F. Kennedy’s post-War boom, society had fallen in underneath America, had become fractured and divided by political assassinations, youth riots, Vietnam and the Age of Love and its radical challenge to the dominant social paradigm.

Amid this, Michael Crichton was a prophet of anti-science sounding single-note polemics about the dangers of rampant technology. A weird dichotomy runs through Michael Crichton’s work. He loves technology – his books come heavily researched and filled with graphs and diagrams. Indeed, the science and detail in Crichton’s books always eclipses his human characters, which are wooden. Yet for all his impressive flourishes of hard science, Michael Crichton is a rampant technological alarmist who fears that we have created systems that have become so sophisticated that they are going to go out of control and destroy us. For all the scientific detail that goes into The Andromeda Strain, it is also a very pessimistic film. The story is filled with dark ironies – like the amazing hi-tech biological containment bunker nearly being destroyed by something as small as a piece of ticker tape caught in the printer and then nearly blown up by its own safety procedures where a nuclear device cannot be turned off due to a lack of off-switch stations caused by uncompleted construction.

In a repeated design schema that was spread across films like 2001, THX 1138, The Andromeda Strain and The Terminal Man, before being parodied in Woody Allen’s Everything You Always Wanted to Know About Sex * But Were Afraid to Ask (1972), the future was seen as a place where technology had reached a point of pristine, antiseptic perfection, where even mankind’s presence was seen as an unwelcome disease that was infecting techno-topia. The Andromeda Strain, for example, features a blinding white-on-white design and lighting scheme where humans seem like rats in a maze. There is an overwhelming sense in the film of people becoming increasingly immersed in science and technology, dehumanized and reduced to programmable data. In the perfect image of this dehumanization, there is a scene where James Olson responds and starts to flirt with a luscious sexy voice on the PA before he is clinically informed it is in fact that of an old lady who records these voices for a living.

The Andromeda Strain was directed by Robert Wise. (See below for Robert Wise’s other films). Robert Wise is an old school director who always respects the material, not an ego-driven director who needs to stamp his own imprint on the work. He was always someone quietly dedicated to making a good film and has almost invariably made a classic no matter which of the many genres he has worked in. Out of all the screen adaptations of Michael Crichton’s work, The Andromeda Strain is the most faithful. Robert Wise crafts it as an immensely exciting detective story – it may be the first bacteriological whodunnit. Great effort is made to obtain authenticity and realism, with Wise adopting a documentary-like approach shuffling back and forth between government offices and labs, using much in the way of official jargonese, even displaying some of Michael Crichton’s graphs. The scenes with the scientists working around the clock to isolate the virus, especially navigating the interior of the capsule at microscopic size and the eeriness that comes in the discovery of the lifeform present, are completely gripping.

The Andromeda Strain is one of the few science-fiction films that takes a great deal of effort to make sure its’ science is correct down to the nth detail. This is also one hard science film that never talks down to its audience and works all the better for it. It is also one of the few science-fiction films that actually portrays the mundane process of real science. The characters in the film are deliberately made blank – the real stars of the film are the monitors, twirling mechanical arms, lab rats and sanitary procedures.

What is also interesting about The Andromeda Strain is the casting of Kate Reid, who gives an amusingly peppery performance amid the mostly anonymous players. Most notably, in the book the character is male, while in the film she is a woman. The change highlights the fact that Robert Wise and co are attempting to depict a real woman scientist. Contrast Kate Reid to the usual women scientists cast in science-fiction films – one notable example being Raquel Welch in Fantastic Voyage (1966) who is cast as a scientific assistant solely for sex appeal – while here Kate Reid is just one of the film’s players, not present as a function of the story’s need to have a token woman or create romance.

The Michael Crichton was later remade as a tv mini-series The Andromeda Strain (2008), which considerably elaborated on the events of the film/book.

Michael Crichton’s brand of technological alarmism eventually ran its course by the mid-1980s where Star Wars (1977) opened up intergalactic venues with much friendlier regard and essentially tamed technology. By the end of the 1980s, Crichton’s directorial career appeared on the wane and he returned to writing novels. That was until he published a certain novel called Jurassic Park (1990), which propelled his career into the stratosphere after it was filmed by Steven Spielberg as Jurassic Park (1993) and brought Crichton back to screens all over again. Michael Crichton’s films as director were Westworld (1973); the medical conspiracy thriller Coma (1978); the non-genre The Great Train Robbery (1979) about a Victorian heist; Looker (1981) about virtual models; Runaway (1984) about a police squad dealing with amok robots, Crichton quit the director’s chair again following the flop courtroom thriller Physical Evidence (1989). Following the success of Jurassic Park, there were highly successful adaptations of most of his books – Rising Sun (1993), a non-genre thriller from Crichton’s alarmingly racist novel about Japanese business practice; Disclosure (1994), a quasi-sf thriller about sexual harassment; Congo (1995), a modern lost city quest; Twister (1996), a Crichton original screenplay about tornado chasers; The Lost World: Jurassic Park (1997); Sphere (1998), an underrated film about the investigation of an underwater UFO; The 13th Warrior (1999), from Crichton’s Eaters of the Dead (1976), a reworking of the epic legend Beowulf with Neanderthals; the time travel film Timeline (2003); and the tv series remake of Westworld (2016– ). Crichton also created the hit tv medical drama ER (1996-2009).

Robert Wise has directed a number of classic films including Run Silent, Run Deep (1958), West Side Story (1961) and The Sound of Music (1965). Wise’s other genre films are:– The Curse of the Cat People (1944) and The Body Snatcher (1945), two classic psychological horror films made for Val Lewton; the human hunting film A Game of Death (1945); the science-fiction classic The Day the Earth Stood Still (1951); the haunted house classic The Haunting (1963); Audrey Rose (1977), a courtroom drama about reincarnation; and Star Trek – The Motion Picture (1979).