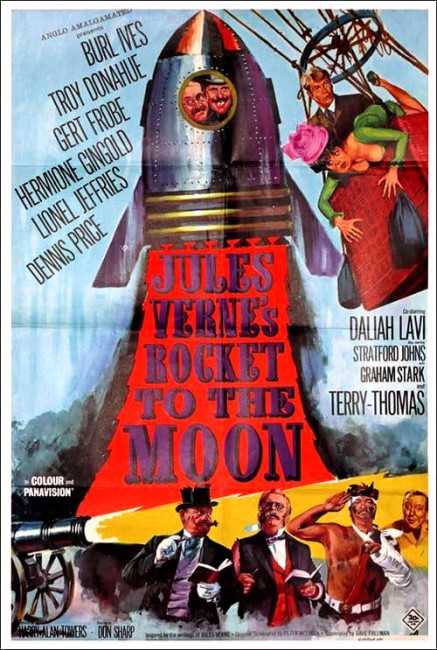 aka Blast-Off; The Journey That Shook the World; Those Fantastic Flying Fools

It is the great Victorian Age of Science where everyone is trying to make new scientific discoveries. When his business goes up in fire, the showman Phineas T. Barnum flees from financial ruin in the United States and travels to England. Barnum is invited to a lecture by the German explosives expert Siegfried Von Bulow where Von Bulow proposes the idea of sending a projectile to the moon using a powerful new explosive. Von Bulow is ridiculed but Barnum thinks the idea is marketable and sets about finding the financial backing in order to build a giant cannon to fire the projectile. Braving foreign spies, saboteurs, crooked accountants and the romantic woes of his engineer, Barnum determines to launch the rocket.

The 1950s and 60s offered a fad for films based on the works of Jules Verne. This was started off with Disney’s excellent and serious 20,000 Leagues Under the Sea (1954). However, it was the Academy Award winning adaptation of Around the World in Eighty Days (1956) that paved the way that the majority of these subsequent Verne adaptations took where they became colourful and silly works that were like circus/variety shows with numerous stars in guest cameos and where everything was played with a distinct tendency towards campy unseriousness.

Despite the title, Jules Verne’s Rocket to the Moon, there is no Jules Verne connection in the film. Certainly, the film does have some nominal similarities to Jules Verne’s From the Earth to the Moon (1865), which was a serious work about a gun club that makes plans to build an enormous cannon to launch a projectile to The Moon using a powerful new explosive. For anybody coming on the Jules Verne connection or even expecting a science-fiction film, Rocket to the Moon is a cheat. Most of the various retitlings and the film’s advertising campaign lead one to expect a trip to the Moon or even that we see the rocket launched, which the film entirely fails to provide.

More than anything, Jules Verne’s Rocket to the Moon is a slapstick chase/caper film in the then box-office tradition of films like It’s a Mad, Mad, Mad, Mad World (1962), Those Magnificent Men in Their Flying Machines (1965) and The Great Race (1965) – something that is clearly evidenced by the casting of Gert Frobe and Terry-Thomas, regulars from this type of farce. As with most of these films, there is much slapstick running about – a lot of people are blown up but nobody is ever killed, maimed or even harmed, and there is the inevitable silly vehicle chase sequence. Alas, Rocket to the Moon is on the decidedly slight side and everything is over before it all begins.

Most of the sizeable name cast play to the gallery in hammy over-the-top performances as became the fashion for these films, with Lionel Jeffries in particular being downright awful. Troy Donahue plays with a handsome stolidity and completely fails to get into the spirit of the madcap farce the others do. The only one who gives a decent performance is Gert Frobe.

The film nominally uses the real life character of showman and notorious self-promoter Phineas Taylor Barnum (1810-91) as its hero. There is some occasional truth to the portrait in that P.T. Barnum did tour Europe and meet Queen Victoria in the mid-1840s, although the rest of the film about his attempting to build a rocket must be regarded as complete fiction.

Australian-born Don Sharp who later became a regular director within the British horror industry making the likes of Kiss of the Vampire (1962), Witchcraft (1964), Curse of the Fly (1965), the first two of the Christopher Lee Fu Manchu series The Face of Fu Manchu (1965) and The Brides of Fu Manchu (1966), Rasputin The Mad Monk (1966), the psycho-thriller Dark Places (1973), the undead biker film Psychomania (1973) and the lost world film Secrets of the Phantom Caverns/What Waits Below (1984).