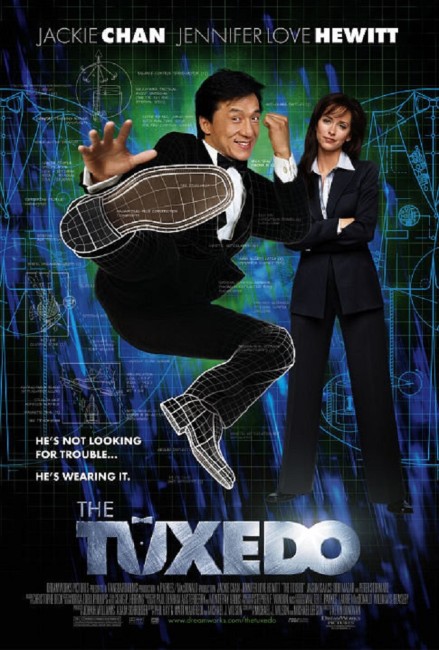 New York cabbie Jimmy Tong is recruited by the covert ops agency CSA as chauffeur for top agent Clark Devlin. Devlin is then hospitalised by a bomb explosion, so Jimmy puts on Devlin’s tuxedo and takes his place. Jimmy then finds that the tuxedo is a highly sophisticated piece of technology that reacts with his body to turn him into a dazzling fighting machine and provide gadgets and utmost cool for all occasion. Along with novice CSA agent Dell Blaine, who thinks that Jimmy is Devlin, he is plunged into trying to stop a plot by bottled water manufacturer Deidrich Banning to infect all drinking water with a virus that fatally dehydrates the body.

There was a time Jackie Chan was seen as one of the great comic geniuses of Hong Kong cinema. Chan made astounding works of martial arts cinema such as Police Story (1986) and sequels, Armour of God (1986) and sequels, and Twin Dragons/Double Dragon (1992). Chan became a multiple-disciplined force, not only acting, but directing and choreographing the martial arts sequences for several of his films. His specialty became a high-energy blend of martial arts and slapstick comedy. He had a reputation for doing his own stunts and often indulging in considerable peril to do so. Some of his films, especially Drunken Master II (1994), are regarded as supreme masterworks of HK cinema.

Following the breakthrough success of Rumble in the Bronx (1995), Jackie Chan was then discovered by American mainstream cinema. Chan was one of the first and without question the most successful of Hong Kong actor to make it as a crossover artist. Unfortunately, when he did so, what resulted were tepid middle-of-the-road comedies such as Rush Hour (1998), Shanghai Noon (2000) and their various sequels, before the nadir reached by The Tuxedo and The Spy Next Door (2010), which had Jackie playing babyistter to unruly kids. Chan found himself caricaturised as an imperturbably comic little man with some occasional cool moves, even literally as a cartoon character with the animated tv series Jackie Chan Adventures (2000-5).

What Jackie Chan has become after moving to the mainstream is almost the antithesis of what he used to be. Chan has cut back on his stunts due to his increasing age – he was 48 when he made The Tuxedo. Now he only plays out as a comic figure with a funny accent – somewhere between Charlie Chan and Charlie Chaplin, if you like. All that made Jackie Chan famous has been abandoned or watered down by directors that seem to know little about staging martial arts sequences.

The Tuxedo is probably likely to be the low point of Jackie Chan’s American career – at least one hopes that he does something to regain form after this. [Alas, such was not the case with Chan appearing in increasingly dire films like The Medallion (2003), Around the World in 80 Days (2004) and The Spy Next Door]. The Tuxedo is one of several films capitalising on the fad for spy spoof movies following the success of Austin Powers, International Man of Mystery (1997). [It came out the same year as Undercover Brother (2002), which was also by peculiar coincidence a spy movie spoof that featured the star of the show having to substitute for a cameoing James Brown].

The Tuxedo is a one gimmick film – Jackie Chan is an ordinary guy who accidentally gets a tuxedo that is a spy supersuit. The film lamely stretches itself out around the slapstick potential of this single gag – of Chan finding the tuxedo constantly lighting ladies cigarettes for him, producing id’s out of a pocket printer and so on. There are a number of frenetically silly slapstick scenes with Chan in the suit demolishing rooms, doing James Brown imitations and an embarrassing sequence in a hotel room with a woman trying to tear his pants off. There is a world domination plot but this is indifferently developed around the slapstick set-pieces.

Jackie Chan doesn’t get to do much in the way of martial arts and what there is is conducted with little in the way of skill upon the part of director Kevin Donovan or the choreographer. Jennifer Love Hewitt is gorgeously elegant but the abrasive sarcasm of the character quickly wearies. Jason Isaacs, once mentioned as a potential James Bond, brings a touch of cool but is on-screen far too little.