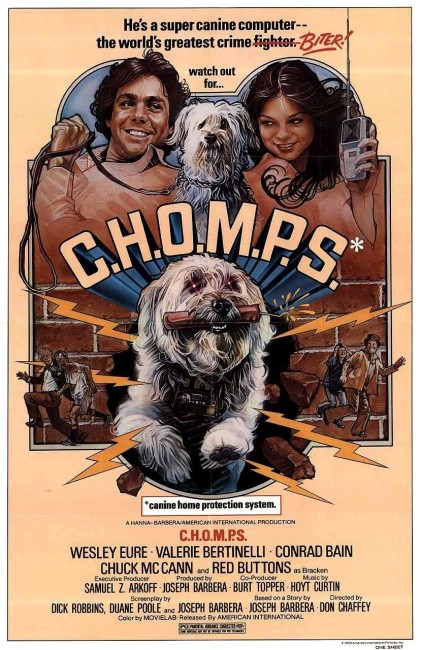 Security systems designer Brian Foster unveils his invention, the Canine Home Protection System, or CHOMPS for short, a home security system designed in the form of a robot dog that comes with built-in x-ray vision, super-strength and sound effects. Brian’s boss dismisses the idea but then CHOMPS apprehends car thieves in a cross-town chase and this makes the tv news. Soon Brian becomes a centre of media attention but then has to deal with a rival corporation that wants to steal CHOMPS.

How Don Chaffey has comes down from the days when he directed films like Jason and the Argonauts (1963), even Hammer’s One Million Years B.C. (1966). In the mid-1970s, Chaffey emigrated to the US where he directed a good deal for Disney and in television. (See below for Don Chaffey’s other genre films).

This sub-Disney clone is an improbable co-production between Hanna-Barbera, creators of Yogi Bear and The Flintstones, and Roger Corman’s old home stables American International Pictures. It was almost certainly conceived in terms of trying to copy the success of Benji (1974) and sequels. At the time it was made, C.H.O.M.P.S. was intended as a big screen breakout vehicle for Valerie Bertinelli, then the teenage star of tv’s hit sitcom One Day at a Time (1975-84). Wesley Eure, her boyfriend in the film, was actually in a gay relationship with Richard Chamberlain around the time the film was made.

The exercise sure dredges a particular barrel. When you have a dog dubbed over with a dull, disinterested voice and coming out with lines like “hand over that bone, turkey,” you know you are in for a bum film. The dreary photography, the disco Muzak soundtrack and the bumbling performances drag the film out excruciatingly.

Being a kid’s film, nobody can ever get hurt so it is filled with bizarre opportunities for people to break falls by landing in dust bins, pools and bins of flour. It may possibly be a hidden message reflecting the crime statistics of our times, or methinks a plot device, but the story does seem to require an inordinate number of robberies to happen throughout.

Don Chaffey was a director who made a handful of films during the Anglo-horror cycle, including several for Hammer’s exotica cycle with One Million Years B.C. (1966), The Viking Queen (1967) and Creatures the World Forgot (1971). Elsewhere, Chaffey directed Ray Harryhausen’s Jason and the Argonauts (1963) and the psycho-thriller Persecution/The Terror of Sheba (1974). In the 1970s, he moved over to work in US television and also made Disney’s Pete’s Dragon (1977).