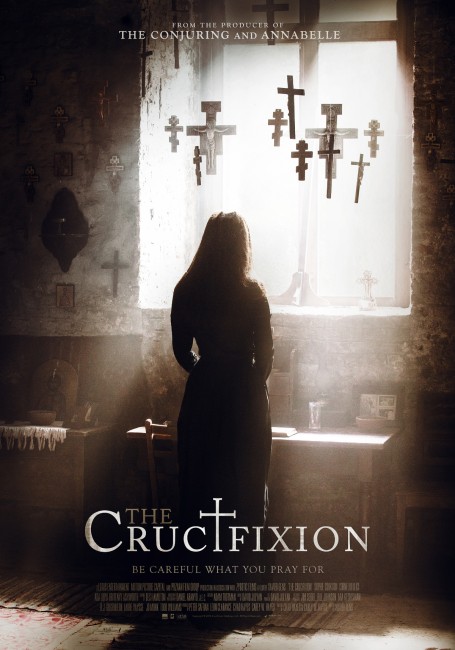 In 2004, Nicole Rawlins, a reporter for The New York Sentinel, presses her editor to allow her to go to Romania and cover a story about Sister Adelina Marinescu, a nun who died after being crucified during an exorcism conducted by Father Dumitru. Nicole travels to the village of Tanacu where she begins an investigation into Sister Adelina’s death, talking to Father Dumitru in jail and others who were involved. As she determines to prove that there is no such thing as spiritual phenomena, she begins to experience manifestations of evil around her.

Following the success enjoyed by The Exorcism of Emily Rose (2005), there have been a number of films over the last few years that have revived the possession and exorcism genre. As with Emily Rose, we now have many of these claiming to be based on true stories. See the likes of Blackwater Valley Exorcism (2006), The Rite (2011), The Possession (2012), The Conjuring (2013) and Deliver Us From Evil (2014). Indeed, The Crucifixion comes written by Carey W. & Chad Hayes who also wrote The Conjuring and its sequel The Conjuring 2 (2016) and who seem to be aiming to corner a market on this sub-genre of “True-Life” exorcism stories. (The two come from a Baptist background and their interviews are littered with quotings of Bible verses).

The Crucifixion comes from French director Xavier Gens. Gens first emerged in 2007 with two films – the gore-drenched Backwoods Brutality effort Frontiers(s) (2007) and the English-language videogame adaptation Hitman (2007). He followed these with the sensational nuclear fallout shelter drama The Divide (2011), the X is for XXL segment of The ABCs of Death (2012) and Cold Skin (2017) about people of a lighthouse at siege from amphibian creatures. He has also produced Cell (2016).

I anticipated The Crucifixion a good deal. I had not been too enthused by Xavier Gens’ earlier films but he had blown me away with emotionally raw and devastating The Divide. I was interested to see what he was going to do to top this. The possession and exorcism genre has started to seem incredibly tired in the last few years due to far too many films cycling through the same limited number of plots. The hope was that Gens would do something amazing with the genre.

Sadly to report, he doesn’t. The film still draws on the same collection of cliches about possession and manifestation. The central figure, another token American character to sell the film to US audiences (even though Sophie Cookson is herself a British actress) and her arc between atheism and belief througout the course of the film is a cliche that was laid down by the very first entry in the exorcism genre The Exorcist (1973).

About the only thing that The Crucifixion adds that is new is that rather than the usual Roman Catholic priests, it locates everything amidst the Eastern Orthodox church. Even then, the mix of Eastern Orthodox superstition vs atheism/belief is something that was done far better by the Romanian-made Beyond the Hills (2012). Gens passes through all of the cliches without doing anything to animate or make them interesting in the slightest.