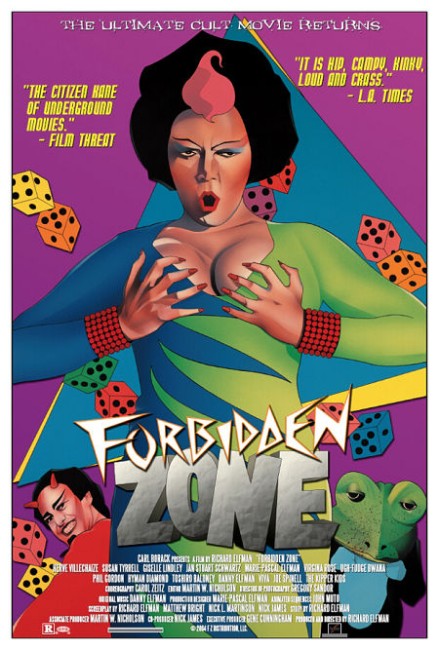 The Hercules family buy a house in Venice, California. The daughter Susan, who is nicknamed Frenchy, returns from France. Despite being urged not to do so by the others, Frenchy ventures down into the area in the basement that the others refer to as the Forbidden Zone, a doorway that propels her into the Sixth Dimension. The Sixth Dimension is presided over by the dwarf king Fausto. With the arrival of Frenchy, King Fausto develops a case of lust for her and orders her placed in his special Cell 63, much to the jealousy of his wife Queen Doris. Frenchy’s brother Flash, her grandfather and others then enter the Sixth Dimension in search of her.

Forbidden Zone is a film project that grew out of the musical group Oingo Boingo (originally formed in 1972 as The Mystic Knights of Oingo Boingo but known as just Oingo Boingo from 1979 onwards). Created by Richard Elfman, the group gained a modest cult following and released nine albums before parting ways in 1995. The original version of the group was as a cabaret act that performed absurdist skits in a variety of musical styles. This evolved into more popular music as the group obtained recording contracts, although there was always a wacky element to their style. The makeup of Oingo Boingo changed over time, with Richard Elfman retiring from the group in 1979 to developing his interest in filmmaking. The group was then inherited by Richard Elfman’s younger brother Danny who in later years became known as a film composer with celebrated scores for Tim Burton films such as Pee-Wee’s Big Adventure (1985), Beetlejuice (1988), Batman (1989), Edward Scissorhands (1990), The Nightmare Before Christmas (1993) et al, and numerous other works.

Richard Elfman originally conceived Forbidden Zone as a visual document of Oingo Boingo’s live performances and then expanded out to add a dramatic structure and plot. Richard and his then wife/lead actress Marie-Pascale Elfman raised the budget themselves by renovating and selling houses. Forbidden Zone was shot in 1980 using friends and family as the cast – there was only a single paid actor Herve Villechaize – and the film premiered in 1982.

The term cult film is often thrown at a work but few films are genuinely worthy of such label; Forbidden Zone is one that certainly is. The film found almost no audience when it originally came out but has undergone reappreciation in the last few years and is now starting to find its way around midnight screenings.

Certainly, as the film opens, you wonder what on Earth is going on – what we are watching seems utterly bewildering. The sets for the exterior and interiors of the Hercules house are exaggerated and clearly painted flats like something out of The Cabinet of Dr Caligari (1919) albeit in a more cartoonish form. When it comes to the clever animated credits, the film almost seems to be attempting to be The Cabinet of Dr Caligari by way of Robert Crumb’s cartoons or perhaps Ralph Bakshi’s film interpretations of these – see in particular Fritz the Cat (1972). The character of the corrupt landlord Huckleberry P. Jones who enters the house in the opening moments plays on Blackface caricatures that enter into a decidedly dubious territory. We get scenes from down in the Sixth Dimension that involve topless girls running around whipping chaingangs of other girls, as well as a tap-dancing frog that looks like something out of a pantomime version of The Wind in the Willows (1908).

Richard Elfman fills the film with bizarre images – like the royal dinner table that has a figure suspended from wires overhead holding candles in its hands and feet, while beneath the frog footman cuts off a harpist’s ear as diminutive Herve Villechaize walks down the length of the table to woo his queen Susan Tyrrell. There is a good deal in the way of questionable gay humour, performances delivered in drag and general smuttiness, not to mention Bettie Page type fetishism involving women in bondage gear. The bizarreness includes girl-girl catfights, lots of Jewish humour (a number entitled The Yiddish Charleston) and a good many songs. The standout number among these is Squeezit the Moocher, which features Danny Elfman performing an amazingly lively gospel/rock’n’roll-styled song and dance number down in Hell as Satan himself.

Forbidden Zone is certainly a strange film. On the other hand, you sit back after watching the strangeness and wonder what to make of it. It is a film that you admire for its consistent bizarreness more than you necessarily do anything else. Richard Elfman and those involved have made a determination to be as weird and wacky as possible. This has its amusements. But is Forbidden Zone anything more than the sum of this? It is certainly never a film where the bizarreness has you in fits of laughter as it does in say the works of John Waters or communicates the sheer fun to be found in the nonsense as a similar cult film like The Rocky Horror Picture Show (1975) does.

Susan Tyrrell, the doyen of dozens of cheesy B movies, is surprisingly the most professional among the cast. During the musical numbers she holds up well, opening up with a throaty brassiness, for all the world like a Mae West, albeit a Mae West that looks almost permanently trashed. Diminutive Herve Villechaize, the 3’11” French actor best known for tv’s Fantasy Island (1976-83), was apparently involved with her at the time.

Richard Elfman subsequently went on to direct Full Moon’s bizarre Shrunken Heads (1994), the action film Streets of Rage (1994) and Modern Vampires (1998). The most interesting name on the film is that of co-writer Matthew Bright who also plays the role of Squeezit who spends the whole film running around in his underwear, as well as his gay brother. Matthew Bright subsequently went onto direct/write the deconstructed fairytale Freeway (1996), its amazing sequel Freeway II: Confessions of a Trickbaby (1999) and the true-life serial killer film Ted Bundy (2002).