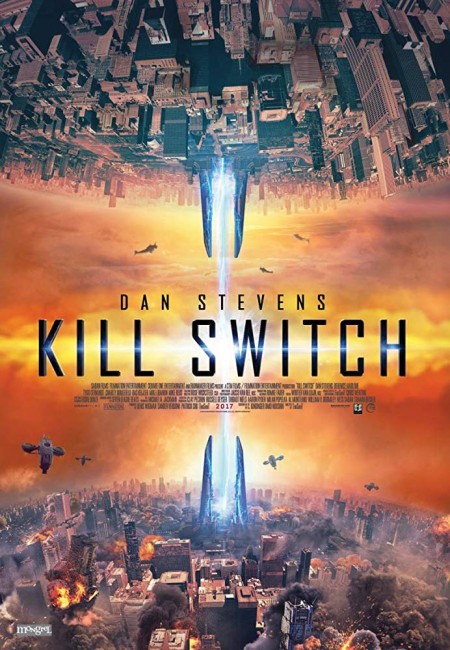 Will Porter, a physicist and former NASA astronaut, has been hired by Alterplex, a company based in Amsterdam. Alterplex is planning to develop a new source of energy by creating an artificial copy of the universe and bringing matter through an inter-dimensional portal. However, something goes wrong after the machine is activated. Will is then sent through the portal to the echo universe where everything has been identically duplicated but in mirror reverse. There the streets are in chaos due to inter-dimensional holes in the sky that are alternately sucking objects up or dropping trains, planes and ships out of them, creating mass devastation across the city. Will flees through the chaos, hunted by heavily armed drones and security forces who regard him as an impostor because the echo universe’s Will has been killed. In the midst of this, Will attempts to activate a control cube that will set the two universes aright again.

Kill Switch was a directorial debut for Dutch filmmaker Tim Smit. Smit bills himself as TimSmiT, so as presumably to prevent confusion with the more well known Dutch businessman Tim Smit, best known for creating The Eden Project. TimSmiT had performed visual effects on a handful of films before making his debut as a director here.

Kill Switch – not related to or to be confused with the Steven Seagal action film Kill Switch (2008) – is another of a number of films in recent years that take their lead from Gareth Evans and Monsters (2010) in that they are made on a minimal budget by directors who provide a highly accomplished level of visual effects fairly much all by themselves. In this regard, TimSmiT does an impressive job of providing surreal shots of trains and planes falling from the sky and crashing into the city or of ships being sucked up into the hole.

The film kept me constantly interested by wondering what was going on as we enter the parallel world – one that we find out has been mirror reversed, which reminds you of Doppelganger/Journey to the Far Side of the Sun (1969), even if this eventually offers a slightly less nonsensical explanation for it – and as Dan Stevens’ protagonist is hunted by drones and security forces, at the same time as he sees flocks of birds and ships being sucked up into the sky and whole trains and planes being spat out – shades of something like The Philadelphia Experiment (1984). As becomes apparent, he is holding a box that has the power to stop the catastrophe, which becomes fiercely sought by mirror equivalents of the characters he is familiar with.

The film also flips about in time between Dan Stevens and family watching the experiment being activated, scenes in the parallel world (which we become aware are taking place subsequent to that) and other scenes in the past as we see Dan being recruited to the project. This is designed with some intent as the film has its major headline name Dan Stevens present in only a few scenes, while the bulk of the action takes place from first-person shooter perspective as the character we are told is Dan (but do not actually see) runs about, something that clearly allows TimSmiT to shoot scenes around Amsterdam without the need to afford a Hollywood star to be present for all of the action scenes.