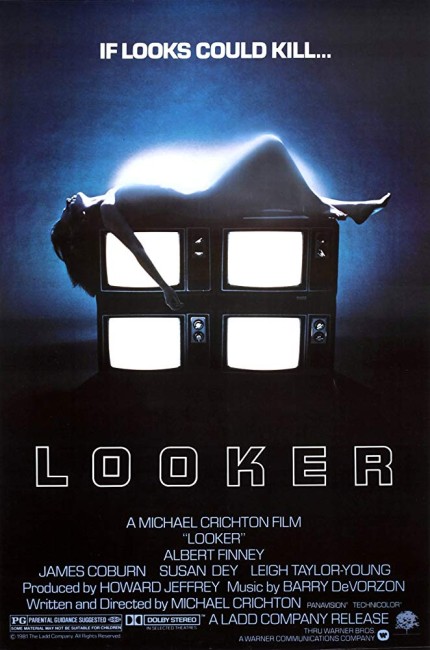 Beverly Hills plastic surgeon Dr Larry Roberts becomes implicated in the murder of several models, all who have come to him requesting he make micro-surgical alterations to their features. Roberts realises that model Cindy Fairmont is one of the next intended victims and tries to protect her. In so doing, he uncovers a scheme by an advertising company to hypnotise tv viewers with pulses of light hidden in the on-screen images of models’ eyes and to eliminate and replace the original models with computer-generated simulations.

Michael Crichton first became known as a result of his novel The Andromeda Strain (1969). Crichton embarked on a successful career as a novelist but his big break came with the hit film adaptation of his novel, The Andromeda Strain (1971). Crichton parlayed this success to make his own directorial debut with Westworld (1973). He went onto several other films of variable success (see below). Looker was Crichton’s fourth outing as director.

In his films and books, Michael Crichton sort of comes across as a PR man for hard science, although at the same time his treatises often have the habit of becoming strident warnings about the dangers of technology. Looker accordingly is Michael Crichton’s warning about television and the increasing power of advertisers over our minds. The great irony of Crichton’s books and films though is that, for all his championing humanity over the soullessness of the machine age, his characters are bland and distant from real people. In Looker, Crichton’s visual style is flat and his token humans are remote – Albert Finney is uncustomarily dull and Susan Dey, a far cry from her Award-winning part as the intelligent and conscientious D.A. on tv’s L.A. Law (1986-93), is a dopey bubblehead.

Unfortunately, Looker is filled with such gaping plot holes that one never works out what Michael Crichton is trying to say with his anti-tv message. (The one potent image that does remain is when Susan Dey, fearful for her own life, goes to visit her parents who are too enwrapped in a banal tv sitcom to even look at her). One fails to believe that a commercials firm could get away with broadcasting commercials that turn watchers into hypnotised zombies, and the talk about attempting to catch the eye with surgically perfect models is nonsensical. Nor does Michael Crichton at any point ever explain why the models need to be killed off after being turned into computer simulations or why evidence is planted to implicate Albert Finney as the killer.

Most genre critics hate Looker for these holes, although it is not an entirely bad film. As usual, Michael Crichton’s displays of science and technology have a cool fascination – there is a beautifully animated sequence where Susan Dey is digitised. Michael Crichton’s most intriguing invention is a light gun which, when fired, momentarily blanks the victim’s mind and can make the assailant invisible, and, although his explanation of how it works is confusing, the scenes of it in operation, particularly a hair-raising car chase with drivers attempting to blank each other out, are good extrapolative science-fiction.

Several years later, Looker proved of considerable irony in that the very theme that Michael Crichton stridently warned against in the film – that of computer-graphic imaging – would become the basis of the greatest success he has had to date – a little film adapted from one of his books called Jurassic Park (1993) where of course the dinosaurs were represented by CGI.

Michael Crichton’s other films as director are:– the tv movie Pursuit (1972) about a bomber threatening to release nerve gas; Westworld (1973) about an android amusement park that goes amok; the medical conspiracy thriller Coma (1978); The Great Train Robbery (1979) about a Victorian train heist; Runaway (1984) about a police force to stop amok robots; and the courtroom thriller Physical Evidence (1989). Other films adapted from Crichton’s books are: – The Andromeda Strain (1971) about an extra-terrestrial virus; The Terminal Man (1974) about a epileptic who is transformed into a killer by attempts to control his seizures; Jurassic Park (1993); Rising Sun (1993), a superior adaptation of Crichton’s blatantly racist book about Japanese business practice; Barry Levinson’s adaptation of Disclosure (1994), Crichton’s novel about sexual harassment that contains some sf elements; the lost world film Congo (1995); the original screenplay Twister (1996) about tornado chasers; The Lost World: Jurassic Park (1997); Levinson’s underrated Sphere (1998) about the investigation of a crashed UFO; John McTiernan’s The 13th Warrior (1999) an historical epic about the meeting between Vikings and Neanderthals; the time travel film Timeline (2003); the tv mini-series remake of The Andromeda Strain (2008); and the tv series remake of Westworld (2016– ).