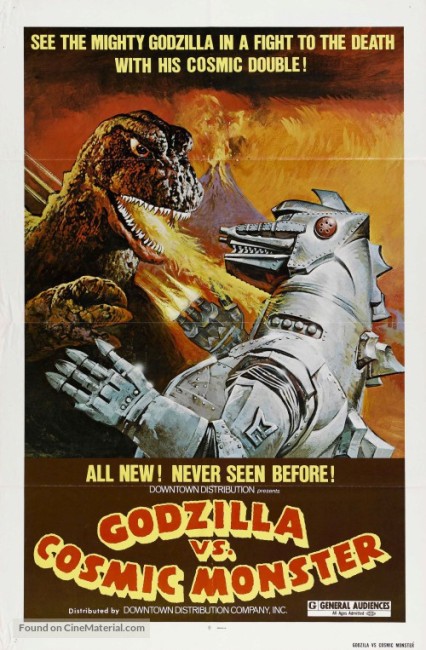 Godzilla appears to be rampaging across Japan. However, this is not Godzilla but a space titanium robot built by ape-faced aliens who want to conquer the Earth. The real Godzilla teams up with King Seesar, a legendary creature that guards Japan and is now called from its slumber by its guardian priestess to fight the menace.

Godzilla vs the Cosmic Monster was the fourteenth Godzilla film. (See below for the other Godzilla films). By now, director Ishiro Honda, who had directed eight of the first ten films, had retired from the series and the reins handed over to Jun Fukuda. From the point of Jun Fukuda’s involvement with Godzilla vs the Sea Monster (1966), the Godzilla series had becoming increasingly sillier and more juvenile-oriented. By the point of his sole directorial control of the Godzilla series during the 1970s, Jun Fukuda had brought it down to an incredibly infantile level. Godzilla vs the Cosmic Monster was Jun Fukuda’s fifth and final entry in the series.

Godzilla vs the Cosmic Monster is awful on almost all levels – from the sloppy camerawork and scripting to the acting. The dubbing is atrocious and contains some real howlers – “It’s a kind of … space titanium,” someone exclaims, to which the immediate rejoinder is “You mean it’s from outer space?” There are the aliens who order people to “Reach for the sky.” King Seesar, which looks like a giant poodle, is the most unintentionally ridiculous of all Japanese monsters. The film at least rises to the occasion in an entertainingly ridiculous climactic fight with Godzilla being beat up on, impaled with darts, even spraying blood.

When the film was released in the US in 1977, it was initially called Godzilla vs the Bionic Monster in an attempt to capitalize on the term ‘bionics’ that had been popularised by tv’s The Six Million Dollar Man (1973-8) and The Bionic Woman (1976-8). That was until the producers of the two series complained and forced a title change (which was hardly fair as they themselves had only borrowed the word ‘bionic’ from the Greeks). The ape-faced aliens show the clear influence of the phenomenal popularity of Planet of the Apes (1968) and sequels.

The idea of Japanese monster heroes fighting mechanical doubles of themselves was first conducted in King Kong Escapes (1967). The character of Mecha-Godzilla also appeared in the next and substantially better entry Terror of Mechagodzilla/Escape of Mechagodzilla/Monsters from an Unknown Planet (1976) where Ishiro Honda returned to the series for the last time. The duel with mecha-Godzilla was later revisited with substantially better effects in Godzilla vs Mecha-Godzilla (1993) and Godzilla Against Mechagodzilla (2002), while Mechagodzilla appears in Godzilla: City on the Edge of Battle (2018) where it has evolved into an artificially-intelligent city. Mecha-Godzilla also later makes a cameo appearance in Steven Spielberg’s Ready Player One (2018).